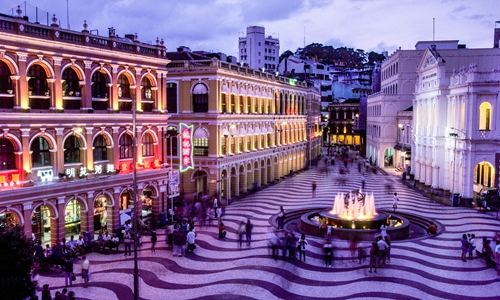 China's Macao Special Administrative Region (SAR) is a pluralistic society with many ethnic groups. One such special group is the Macanese.

They have European faces but can switch between Portuguese, Cantonese and Putonghua (standard Chinese) at any time. They are descendants of Portuguese but have strong emotional links to Macao. The community has developed its own distinct food, culture, and language.

During the return from Portugal to China in 1999, some Macanese people expressed uncertainties. Some of them chose to leave while others stayed; some left but later came back.

Those who stayed in Macao now constitute an important part of its society. Having witnessed the SAR government's efforts in preserving Macanese culture, many in the community say that their feelings of uncertainty have disappeared. Over the past 20 years, their religion has been respected, their culture has developed, and their social participation is growing.

In their eyes, Macao is an inclusive city where people of different religions, skin colors and ethnic groups coexist. When they were asked who they are, they respond that they are Macao residents.

To them, self-identity is more important than an exact definition. They have always seen Macao as their roots and taken Macao as their home. Together with other Macao residents, the Macanese, that only account for 1 percent of all residents in the region, are endeavoring to build a prosperous and peaceful home.

December 20 marks the 20th anniversary of Macao's return to China. It's the day Elisabela Larrea (Chinese name Li Ruolan) celebrates 41st birthday. Li's Putonghua is very standard. She gained fame for producing a documentary a few years ago in which she attempts to retain Macanese culture.

Her ancestors were born in Macao in 1780s, Li said, adding that she is the eighth generation of her family. Li's family is a very typical Macanese family as all her relatives can speak Portuguese and Cantonese. After Macao was returned to China, she chose to study Putonghua in college.

"Cantonese is my native language. When Macao was returned, my mother told me to study Putonghua as none of my family could speak Putonghua. At that time, I was also one of the few in my community who decided to learn the language," Li told the Global Times.

She said studying Putonghua brought many benefits as mastering this language helped her make more friends from the Chinese mainland.

Looking back over the past 20 years, Li acknowledged the new government's efforts in preserving Macanese culture. Though today's Macao is different from the small town in her childhood memory, one thing that hasn't changed is that Macanese culture has been, and will be, protected under the government's and Macanese community's support.

Li noted that around the return of Macao, some Macanese left while some were hesitant. But after the return, Macanese Gastronomy and Patua Opera, an opera based on a Portuguese-dialect with Cantonese elements, have been included in the list of Macao's Intangible Cultural Heritage. The regional government has given a platform for the community to protect their language as Patua Opera practitioners can participate in the annual Macao Art Festival.

"This was a huge recognition. It means that Macanese culture belongs to Macao and the new government tried to display Macao's diversity to the outside world," Li said.

Before the return, the Macanese enjoyed obvious advantages in terms of employment and social status in Macao society. In particular, as government officials, Macanese had a sense of superiority, a Chinese expert on the "one country, two systems" principle told the Global Times on condition of anonymity.

The return of Macao means Macanese faced the loss of their social privileges. Some native Portuguese worried that they might lose the original superiority and Portuguese nationality, their unique native culture and the security of their children's future. Some people left Macao as they had no confidence in the new government, the expert said.

But "the return of Macao does not mean the end of Macao's history, the end of the cultural exchanges between China and Portugal, or the communication between the East and the West. This kind of communication will continue to develop in new forms and new contents," the expert stressed.

For example, there is an independent clause in the Basic Law that protects Macanese. The drafting committee, after careful consideration, considered that in the light of the actual situation of the Macanese, there is still a need for a specific and prominent provision to protect the Macanese.

After the return, Macanese religious beliefs were also respected. Most Macanese are Catholic. On May 13, Macao regional government held a parade of Our Lady of Fatima, which is one of the most important Catholic festivals in Macao.

In 1929, Macao introduced the Lady of Fatima, one of Portugal's most worshiped figures, who legendarily appeared in Portugal in 1917. After Macao's return to China, Macanese Catholicism was respected and their communities have taken part in the parades.

With support from the government, the Macanese Association also organizes regular events and conferences and is dedicated to encouraging activity and involvement within the Macanese community.

The Macao Macanese Youth Association was founded in 2012 with the goals of letting young Macanese participate in Macao's economic and social affairs, and promoting Macanese community's unique history, culture and language to the mainland.

Macanese are represented in various fields in Macao. They are civil servants, judges, lawyers, translators and some of them are high officials.

Macao is the only place in the world where both Chinese and Portuguese are the official languages. Since its return to China, the regional government has also emphasized learning Portuguese, hence the increase of Portuguese learners provided a number of talents and a convenient linguistic environment for economic and trade ties between Portuguese-speaking countries and China.

The SAR government established a special research center in the Macao Polytechnic University to strengthen the training on Portuguese teachers and compile Portuguese textbooks.

Many Macanese people interviewed by the Global Times said that after the return, they decided to work in trade between China and Portugal as the new government provided more opportunities for them to take advantages of their talents in their careers.

According to China's Ministry of Commerce, trade between China and the PSCs has grown rapidly since 2003. In 2018, the trade value amounted to $147.35 billion. China imported goods of $105.51 billion from the PSCs and exported goods of $41.848 billion.

"The biggest role [of Macanese] is the bridge. When you do business, you need someone who understands both languages and cultures. If the Chinese mainland businesspeople want to invest in Portugal, they can ask the Macanese to contact for them," Li said.

In a recent interview with Xinhua, Paulo Cunha Alves, consul general of Portugal in the Macao SAR, said Macao has always functioned as a link between Portugal and China and as a gateway to the East.