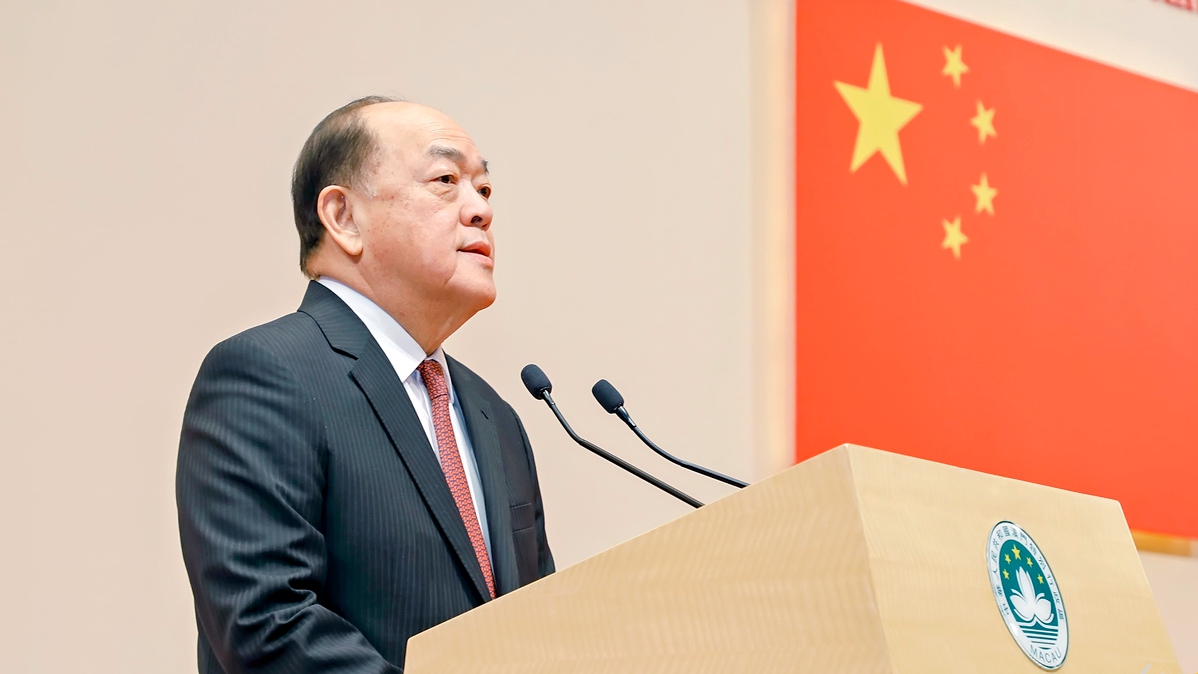 Macao Chief Executive Ho Iat Seng speaks at a reception to celebrate the 71st anniversary of the founding of the People's Republic of China, October 1, 2020. (Photo: Macao SAR Government)

China is establishing a new development pattern known as "dual circulation," which takes the domestic market as the mainstay and lets the domestic and foreign markets boost each other.

In his speech delivered at a reception to celebrate the 71st anniversary of the founding of the People's Republic of China, Ho said Macao will play an active role in the domestic market and further integrate itself into the country's overall development.

On the other hand, the SAR will take part in the foreign market to facilitate China's opening-up under the new circumstances and Macao's economic development, he added.

He stressed Macao's firm adherence to the policies of "One Country, Two Systems," "the people of Macao governing Macao" and a high degree of autonomy, and continued pursuit of Macao's strategic position as a world center of tourism and leisure, and as a commercial and trade cooperation service platform between China and Portuguese-speaking countries.

Thanks to the care and guidance provided by the central government, Macao was able to contain COVID-19 from spreading locally, said the chief executive. He hailed the country's solid support for Macao, in particular when facing the unprecedented challenge of the COVID-19 pandemic.

Ho said Macao is now a safe place for tourists and its economy is expected to recover gradually, thanks to the resumption of permit issuance under the facilitated individual travel scheme for mainland residents wishing to visit Macao as tourists.

The reception, hosted by the Macao SAR government and attended by 1,100 guests, was held at the China-Portuguese-speaking Countries Commercial and Trade Service Platform Complex.

Earlier Thursday morning, Ho and about 550 guests attended a flag-raising ceremony at the Golden Lotus Square.

Hong Kong SAR also held a flag-raising ceremony and a reception to celebrate China's National Day on Thursday. Chief Executive Carrie Lam said the central government has given full support to Hong Kong in tackling various difficulties and challenges since the city returned to China in 1997, underscoring Beijing's assistance to Hong Kong in the fight against the COVID-19 outbreak.

She called on people in Hong Kong to sincerely support the "One Country, Two Systems" principle and the Basic Law and seize the opportunities as China seeks the new development pattern.