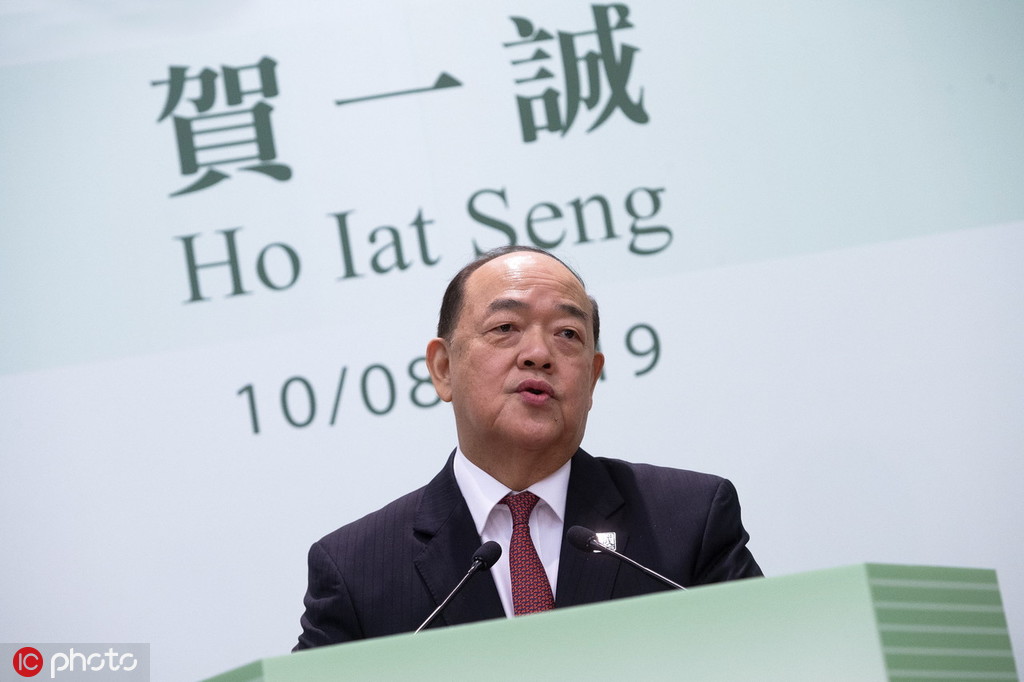 Ho made the remark during a recent exclusive interview with CMG Radio the Greater Bay when he visited China Media Group in Beijing. The radio station is the nation's first dedicated to residents of the Guangdong-Hong Kong-Macao Greater Bay Area.

During the interview, Ho pledged to strictly carry out the "one country, two systems" policy without any alterations.

Macao people's rights and the executive, legislative and judicial functions of the Macao SAR have all been empowered by the city's Basic Law, which is mandated by the nation's Constitution, Ho added.

With this in mind, Macao can fully apply the principle and avoid actions that compromise the principle, Ho said.

He also said that to ensure the successful practice of "one country, two systems", it is also necessary to make good use of the advantage of "two systems" by leveraging Macao's unique strengths.

The blueprint of the Greater Bay Area, which is made up of the Macao and Hong Kong SARs and nine cities in Guangdong province, has positioned Macao as a world-class tourism and leisure center, a commerce and trade cooperation service platform between China and Portuguese-speaking countries and a base for global exchanges and cooperation.

The chief executive-elect has vowed to seek new breakthroughs in achieving a more diversified economy by proactively engaging in the nation's overall development.

In the past two years, progress has been achieved in the exhibition, retail and financial sectors. Yet there is still a ways to go in reaching the appropriate level of diversified economic development, Ho said.

Ho said Macao is striving to meet its goals and he hopes breakthroughs can be seen amid further integration into the nation's development, especially closer collaboration with Greater Bay Area cities.

To accelerate the process, he called for more young people in Macao to seek development opportunities on the Chinese mainland-a much vaster market. Whether to expand businesses, or simply get firsthand experience in the nation's development, going to the mainland is sound strategy, he said.

Ho will be sworn into office on Dec 20 at a ceremony marking the 20th anniversary of Macao's return to the motherland.