CHINA Macao youth have a strong sense of national identity: Vice Rector of the University of Macao

Macao youth have a strong sense of national identity: Vice Rector of the University of Macao 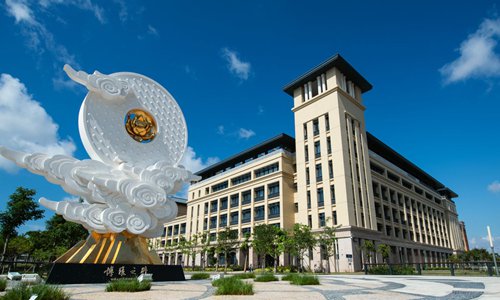 Aerial view of campus of the University of Macau.  (Photos: Global Times)

The University of Macau is the only public comprehensive university in Macao Special Administrative Region (SAR). In August 2014, the university was officially moved to its new campus located in Hengqin Island, Zhuhai, South China's Guangdong Province.
The government of Macao SAR obtained the land use right of the new campus on Hengqin Island with a 40-year lease set to expire on December 19, 2049. The campus is about one square kilometer, a 20-fold increase in space from the old campus on Taipa Island which covered less than a tenth of a square kilometer.
Although it is located on Chinese mainland, the law of Macao SAR applies to the new campus.
"It is the strong support of both the Central and Macao SAR governments and the guarantee of 'one country, two systems' principle that help us build a world-class campus to satisfy the demand of the development of university and students," Ge Wei, Vice Rector (Research) of the University of Macau, told the Global Times.
Ge said that young people in Macao accept and cherish the "one country, two systems" principle with a strong sense of national identity.
Strong national identity
"Since the handover of Macao from Portugal to China, Macao people have experienced a dramatic improvement on their life," Ge said, adding that the public security situation has improved significantly since Macao's return.
Although Macao is only one hour away by ferry to Hong Kong, Ge first stepped onto Macao in 2003, which was eight years later after he started to work in Hong Kong in 1995.
"When I first arrived in Hong Kong, I saw a lot of negative news about Macao's social problems on TV, such as underworld organizations, beating, smashing, looting and arson. It is conceivable why I did not visit Macao until eight years later even though it is so close to Hong Kong," Ge explained, noting that, "however, Macao now marks the safest city in China this year."
Macao is ranked as the safest city in China in 2019, according to a ranking report released on the 18th press conference of 2019 Global Country (City) Competitiveness Classified Advantage Rankings held in July in Hong Kong, Journal Cheng Pou, a local newspaper, reported.
"Besides public security and social harmony, the economy of Macao also reaps a huge growth 20 years after the return back to China," Ge noted.
According to the statistics and census service bureau of the Macao SAR government, Macao's per capita GDP rose from $15,000 in 1999 to $83,000 in 2018, ranking second in the world, behind Luxembourg, 21 century Business Herald reported in August.
"People in Macao really enjoy the improvement of life brought by the 'one country, two systems' principle. Therefore, the biggest reason for the success of the principle in Macao is that all parties treasure it and make efforts to maintain it," Ge noted.
The sense of Chinese identity among Macao's youth is very strong despite the 446 years of Portuguese influence in Macao. During the colonial period, Macao people were highly self-reliant and various social organizations played an important role in social governance, Ge told the Global Times.
"It's hard to believe that there are thousands of regional social organizations or communities such as East China's Fujian communities, Zhejiang communities in Macao. Community division is very detailed, which can reach the level of counties," he said.
As a result, Macao people have always been very close to the Chinese mainland and their hometowns. Macao is a tolerant city where you wouldn't be treated differently because of the language you are speaking."
Many local schools adopt Chinese mainland version textbooks in some subjects, especially history and geography, broadening their knowledge and understanding of the Chinese mainland.
Ge told the Global Times that there are three flagpoles just in front of the window of his office at University of Macau: the national flag of China, the flag of Macao SAR and the flag of the university. There is a flag-raising honor guard in the University of Macau who is responsible for the flag-raising ceremony every day and on important events.
"It is common for Macao students to sing the Chinese national anthem and raise the Chinese national flag at their graduation ceremony," Ge explained.
Future with confidence
"Macao students hardly worry about getting a job after graduation, and the employment rate of Macao is high. The government of Macao SAR also shares benefits of economic growth with people directly by a wealth partaking scheme. People in Macao enjoy a strong sense of well-being," Ge told the Global Times.
According to the statistics and census service bureau of the Macao SAR government, the overall unemployment rate in Macao in 2018 is 1.8 percent, 0.2 percent lower than in 2017. The median monthly working income of the total employed population was 16,000 patacas ($1,978.71), an increase of 1,000 patacas over 2017, the Xinhua News Agency reported in January.
The Wealth Partaking Scheme has been implemented for 12 years since 2008 by the government of Macao SAR, with the goal of sharing the fruits of economic development, and combating inflation and the impact of 2008 financial crisis.
As of October 3, 2019, 10,000 patacas and 6,000 patacas have been distributed to permanent residents and non-permanent residents respectively, according to the website of Financial Services Bureau of Macao SAR government.
"I have asked a young Macao man what was his major difficulty currently. The answer is also buying an apartment," Ge told the Global Times.
The housing price in Macao is too high for many young people to afford. Many Macao families, however, are open and happy to purchase real estate nearby in cities like Zhuhai, South China's Guangdong Province, where the housing prices are relatively cheaper.
"Young people in Macao are a little worried, but not full of worrisome and negative emotions, as they are generally open for development opportunities in Chinese mainland," Ge said.
Moreover, the strategic development of the Guangdong-Hong Kong-Macao Greater Bay Area (GBA) brings deeper understanding, wider cooperation and better opportunities for Macao youth.

When visiting some famous corporations in the GBA, Ge is often shocked by the development of the high-tech sectors and the prospect of future life shown by companies like tech giant Tencent. Huawei impressed Ge with a whole wall of its patents. He was moved by the humbleness of the company's staff.
"Most of achievements are made by young people," Ge noted, adding that "I hope that Macao young people can also take a long-term view and pursue a bigger career. It is conducive to them to understand more of the development of Chinese mainland, and seize the golden opportunity of GBA."
Conversely, Chinese mainland students are increasingly studying in Macao. Ge noted that the number of Chinese mainland students applying to the University of Macau in the 2019-2020 academic year dramatically increased by 58 percent compared with last year. It was around 6,000 last year and it rose to nearly 10,000 this year.
The branding improvement of the University of Macau and the greater development of the GBA attract more Chinese mainland students, Ge asserted.
"Our new campus is one of the most beautiful campuses in China. European style architectures and Suzhou style gardens coexist. We have the best university library in Asia, and students enjoy high quality of living environment on campus; For example, the mattresses in student dormitories are five inches thick, which is more comfortable for students," Ge said.
"We welcome more Chinese mainland young people to study in the University of Macau, enjoy the peaceful life of the city and experience the great success of 'one country, two systems' principle in Macao," he said.