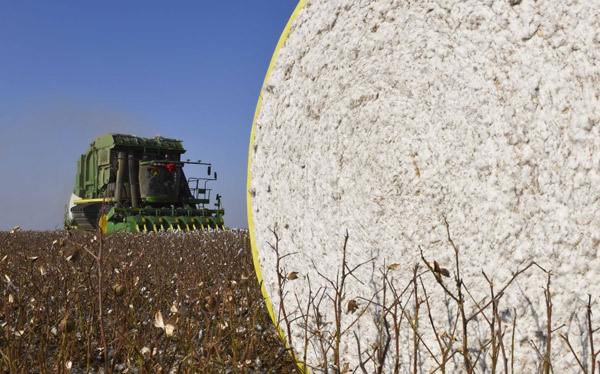 Machines are replacing hundreds of thousands of migrant workers who pick cotton in the Xinjiang Uygur autonomous region, the nation's biggest cotton production base.

At this time of year, Xinjiang's growers usually begin hiring workers to pick the crop. However, 116,000 hectares of cotton fields in Shawan county have already been harvested using machines.

"In the past, the cotton harvest lasted at least 45 days from October to November. Now, the machines can harvest a 15-hectare cotton field in a day," said Lin Hongru, head of Caohu village.

One machine can do the work of 2,000 manual laborers every day, he said.

"The cotton harvest was once the busiest time of the year. Cotton growers in my village hired migrant workers from Gansu, Sichuan and Henan provinces to help. People worked in the fields from dawn to dusk," Lin said.

Roaring machines now move swiftly through in the fields, stripping the cotton from the stalks and collecting it in large containers.

Xinjiang produced 3.59 million metric tons of cotton in 2016, accounting for 67.3 percent of China's cotton production, up from 62.5 percent in 2015, according to the National Bureau of Statistics.

There was a decrease in growing area last year, yet cotton yields increased by 151 kilograms per hectare thanks to the use of irrigation and machinery.

Agricultural technicians took advantage of the harvest season to demonstrate a new generation of machine that can pack the cotton into 2-ton bales in real time.

Gao Yongjian, an agricultural technician, told farmers that the machine is more efficient than the older models. Large-scale farming is increasing in Xinjiang as farmers become more interested in joining rural cooperatives to share machinery, he said.