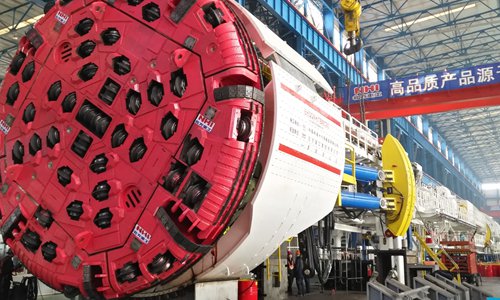 China will further open up its massive manufacturing sector to foreign investors and favorable policies under the country's ambitious "Made in China 2025" initiative will also apply to foreign companies operating in China, the industry and information technology minister said on Monday.The comments came amid rising trade tensions between China and the US, with the latter having announced a slew of measures against Chinese technology products and consumer electronics, reportedly trying to counter the "Made in China 2025" plan. Some foreign officials and companies have also raised concerns that the industrial upgrade plan could favor Chinese firms over their foreign competitors."All the policies and measures that support 'Made in China 2025' will be applicable to all types of enterprises in China, and domestic and foreign companies will be treated equally," Miao Wei, head of the Ministry of Industry and Information Technology, told a panel at the China Development Forum on Monday in Beijing. "We will further open up the manufacturing industry and offer foreign firms more investment opportunities."Launched in 2015, "Made in China 2025" is a policy initiative that aims to spearhead the upgrading and modernization of China's manufacturing sector and help the country to become a global manufacturing powerhouse.But the initiative is open to participation from all, Miao said. "[We] encourage and support more countries, companies and institutions to participate in the implementation of 'Made in China 2025' and seek common development and promote the high-quality development of China's manufacturing industry," he noted.Western worriesThe "Made in China 2025" program has sparked concerns among some Western officials, particularly in the US, that China is aiming to dominate key manufacturing sectors such as new-energy and self-driving cars, information technology and aerospace equipment.While US officials have maintained in public that their recent decision to slap tariffs on $60 billion-worth of Chinese imports was intended to punish China's alleged theft of US intellectual property, some US media reports said that the tariffs are aimed at countering the "Made in China 2025" initiative.Liu Xuezhi, an expert on macroeconomics at Bank of Communications, pointed out that such concerns are mostly held by traditional manufacturing powers such as the US and Germany, and their "hostile attitude" toward "Made in China 2025" is based on political and competitive considerations."'Made in China 2025' does not restrict the participation of foreign companies," Liu told the Global Times. "There are certain restrictions in some areas, but the overall direction is that China will open up more sectors."In the Government Work Report delivered to this year's two sessions, China vowed to "fully open" the general manufacturing sector and expand the opening-up in sectors such as telecoms, healthcare, education, elderly care and new-energy cars.In a speech to the China Development Forum on Sunday, Vice Commerce Minister Wang Shouwen said China would soon release a timetable and road map for opening-up in sectors such as finance and new-energy autos.Tian Yun, director of the China Society of Macroeconomics Research Center, said that China's opening-up policy has not and will not change and there are many areas in which China can still open up more."The Chinese market is big enough that there would be no problem to further ease market access for foreign companies and we can share development in some areas with foreign partners," Tian told the Global Times on Monday, pointing to the development of China's domestically developed passenger jet, the C919. "The development of big planes is a great model of cooperation between China, the US and other countries. The plane was designed and developed in China, but some parts are imported from the US and Europe," Tian said.However, Tian noted, there will always be competition in the development of key technologies that are essential to national security. "Let's face it, no country would want to share its key technologies with others." At Monday's panel, several foreign executives showed great interest in participating in the "Made in China 2025" program."We will further cooperate with China in the future because China has huge market potential for us. We have consumers who are very willing to accept new technologies and China has the right government policies to help our industry develop," said Dieter Zetsche, chairman of German carmaker Daimler AG, according to a Chinese transcript of his speech.