Made in China mediocre comedies debut during new year holidays 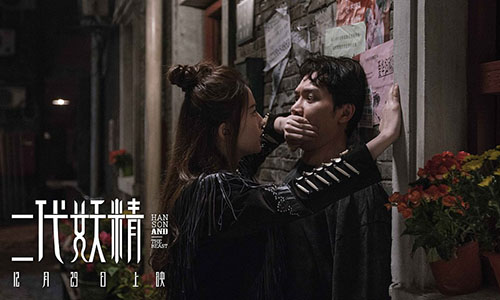 A scene from Hanson and the Beast Photo: VCG

A poster of The Ex-File: The Return of the Exes Photo: VCG

Four films opened on Friday, the day before the three-day new year holiday, all of them Chinese and three of them comedies. Horror comedy Gold Buster topped Friday's box office charts with opening earnings of 90.78 million yuan ($13.95 million). Closely behind was romance comedy The Ex-File: The Return of the Exes, which opened at 76.85 million yuan. As of 3 pm Saturday, The The Ex-File: The Return of the Exes had made 114 million yuan while Gold Buster had notched up 126 million yuan. In third place with 58.54 million yuan was fantasy romance comedy Hanson and the Beast and No.4 was Namiya with 47.14 million yuan, adapted from Japanese writer Keigo Higashino's novel Grief Grocery Store. Director Feng Xiaogang's coming-of-age drama Youth was finally pushed into the fifth place after dominating the box office in previous weeks. Chen Kaige's Tang Dynasty (618-907) fantasy Legend of the Demon Cat sat in sixth. Friday's box office for Gold Buster was the best opening gross for a Chinese film since Never Say Die, another comedy that premiered on September 30, according to an Mtime report. All three comedies performed well in theaters but none were rated highly on domestic film websites : Gold Buster ranked 5.8 on Mtime and 4.9 on Douban. The Ex-File: The Return of the Exes was 6.2 on both Mtime and Douban. Hanson and the Beastscored 5.8 on Mtime and 6.2 on Douban."Our market has a huge demand for comedies," film critic Mu Yi told the Global Times. "Audiences are looking to relax in theaters." China has few comedy movies, Mu noted, and therefore any comedy with proper marketing can do good box office regardless of quality.Kung Fu Yoga, Journey to the West: Demon Chapter and Buddies in India all showed during the Chinese lunar new year holiday with an appeal to a wider audience including friends, families and couples who go to theaters for entertainment.