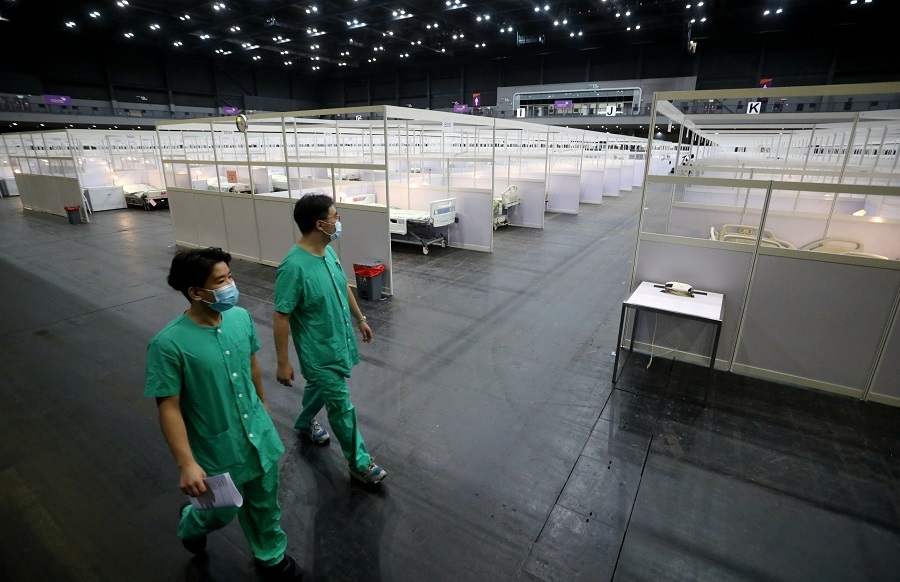 Staff members work on Saturday at a triage center for COVID-19 patients that has been set up at AsiaWorld-Expo in Hong Kong. The center is being assisted by Chinese mainland experts, and virus testing technicians from the mainland are being sent to help the city.

The nation's full support during Hong Kong's grave pandemic situation and the local government's decision to defer legislative elections have offered a ray of hope that the outbreak can be controlled, according to observers in a number of sectors.

Their remarks came as the city recorded triple-digit daily spikes in new cases for 12 consecutive days on Sunday. The total tally stood at 3,511 confirmed cases and 34 deaths.

Guangdong province has selected 60 virus testing technicians to support Hong Kong, and seven of them arrived in the city on Sunday. The province also pledged to offer more medical resources in view of Hong Kong's demands.

Wuhan, Hubei province, the Chinese city hit hardest by COVID-19, gained wide experience in building temporary hospitals and will soon send six experts to help convert more parts of Hong Kong's AsiaWorld-Expo into a makeshift hospital and to build a new temporary hospital in the city.

Hong Kong's first makeshift hospital, built in AsiaWorld-Expo with assistance from mainland experts, began operating on Saturday as a triage center for patients. As of Sunday noon, 31 patients had been sent there.

The hospital now provides 500 beds and could accommodate a maximum of 2,000 patients in the future. According to officials, 31 lavatories, six mobile showers and two public lounges with sofa, tables and televisions are available in the hospital. An additional 18 showers will be installed, and patients can take showers in different time slots.

The city's first so-called cabin hospital was established in seven days before it began to admit patients. Mainland experts supported its design, construction and management.

Hong Kong Financial Secretary Paul Chan Mo-po wrote in his blog on Sunday that the nation's aid is crucial for Hong Kong to overcome the virus, as its pandemic-prevention strategies have been proved effective. Most mainland cities have controlled the epidemic and gotten back on track.

Hong Kong needs to draw from this useful experience to contain the pandemic, Chan said.

Taxi driver Tso Tag-ming said on Sunday he is thankful to the central government for helping the city in these difficult times.

In light of the epidemic, Tso said his life has been harsh, since the average income of the city's taxi drivers has dropped more than 70 percent compared with before the outbreak.

Tso said that with the assistance of the mainland, he hopes the situation can be brought under control and all residents can go back to living normal lives.

Pamela Chan, a retired nurse who took part in the city's fight against SARS in 2003, said she welcomes the team of mainland experts sent by the central government to Hong Kong.

Noting the city's public healthcare system is approaching its limit and local frontline medical workers are under great pressure, Chan said it is a natural and reasonable move for the central government to send experts to the Hong Kong Special Administrative Region as an effort to fight the epidemic.

Given the critical situation, the Hong Kong government announced on Friday that it would delay the Legislative Council election for a year to Sept 5, 2021.

Tung Chee-hwa, vice-chairman of the National Committee of the Chinese People's Political Consultative Conference, described the decision as "lawful and reasonable" and said careful consideration had been given to all factors to arrive at the best solution.

He said that opposition politicians criticizing the move were putting politics above public health.

Margaret Chan Fung Fu-chun, former director-general of the World Health Organization, cautioned that Hong Kong's healthcare system is already overwhelmed amid the raging pandemic. She warned of possible "disastrous consequences" if the epidemic situation were downplayed and actions delayed.