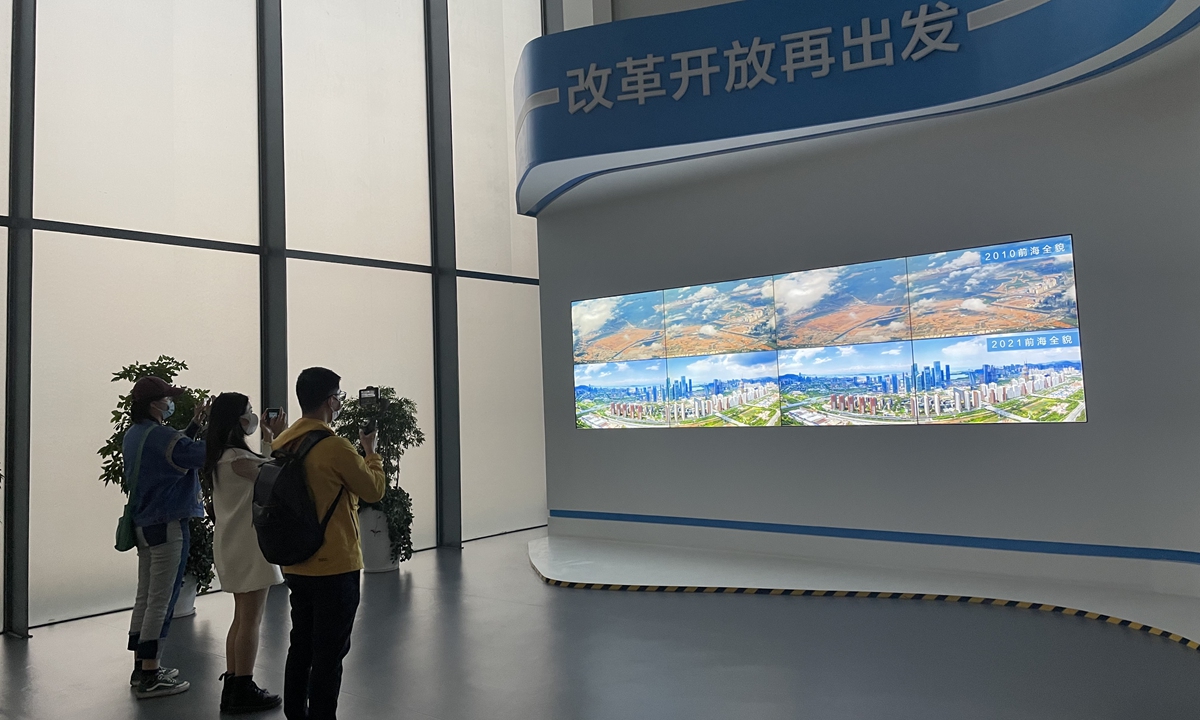 Visitors stand in front of a large screen which shows the changes of the Qianhai Shenzhen-Hong Kong Modern Service Industry Cooperation Zone in Shenzhen before 2010 and in 2021, on November 28, 2021. Photo: Liu Caiyu/Global Times

As the Chinese mainland and Hong Kong Special Autonomous Region (HKSAR) are expected to resume quarantine-free travel soon, entrepreneurs and young people from South China's Guangdong Province, Hong Kong and Macao said they are all yearning for the reopening of the border to better integrate into the development of the Guangdong-Hong Kong-Macao Greater Bay Area.

"Shortly after the Greater Bay Area was unveiled in 2019, the COVID-19 epidemic swept across China and the world, to be honest, I haven't had the chance to taste the integration of the Greater Bay Area," Wei Bo, the founder of Laipic, a Shenzhen-based internet enterprise specializing in animation video production, told the Global Times.

"If the border reopens, I would like to organize my company for recruitment in Hong Kong to give opportunity to more Hong Kong young people to come to live in Shenzhen and work at companies like ours. Coming to Shenzhen means a broader platform to see and grow," Wei said.

Media reports said the Chinese mainland and HKSAR are expected to resume quarantine-free travel as early as next month, the city has basically fulfilled the requirements, and has entered the implementation stage for the orderly border reopening with the mainland, Hong Kong officials said recently. But experts said the border resumption plan may be affected as Omicron, a new and heavily mutated coronavirus variant which is causing global concern, has arrived in Hong Kong.

The closure of the border between the mainland and HKSAR is a blow to the Hong Kong economy and has caused many inconveniences in work, life and education. Many young people in Hong Kong realize that the market size of Hong Kong is not enough to maintain the development of Hong Kong and that exchanges between the two sides are indispensable, Sisley Cheng, a deputy president of Hong Kong Chamber of Commerce in Qianhai and also manager for Women Innovation and Entrepreneurship Base in Qianhai, told the Global Times.

"Entrepreneurs from both sides are hoping for a full border resumption. The resumption of quarantine-free travel should prioritize a group of people in emergencies and businessmen of chambers of commerce and large enterprises with projects in both places who can contribute more effectively to the economies of both places," Cheng noted.

Wei's company, Laipic, is only one of the 148,300 companies that have been registered in the Qianhai Shenzhen-Hong Kong Modern Service Industry Cooperation Zone in Shenzhen. Established in 2010, the zone was hailed as a "special zone" within the Shenzhen Special Economic Zone," which aims to attract companies, intellectuals and investors from Hong Kong to better serve the development of the Greater Bay Area.

To better help young people from Hong Kong and Macao integrate into the development of the Greater Bay Area, especially in Qianhai in the post-epidemic era, Hou Jing, an official from Shenzhen's Qianhai management bureau, said the zone has been working on establishing entrepreneurship, communication platforms and giving financial support and opportunity to attract people from the SAR to work in the zone.

Since 2019, the zone has distributed more than 90 million yuan in seven batches of special support funds for youths in Hong Kong and Macao, benefiting about 289 companies and 855 people in the region.

Benefits and support from authorities in Qianhai, Laipic, where Wei is working has grown from scratch to the market value of 400 million yuan in five years and takes only one year to grow from 400 million yuan to 13 billion yuan.

Forty out of 260 employees from the headquarters of Laipic company are young people from Hong Kong and Macao, accounting for one sixth of the total. In recruitment figures of 2020, more than 800 applicants of Hong Kong designers competed for the 30 posts at Laipic.

A high-tech zone in Zhuhai, a city neighboring Macao, also attracted a flood of entrepreneurs from Hong Kong and Macao, as it's an important hub to promote the Greater Bay area's development. The zone, named the Hong Kong and Macao Science and Technology Achievement Transformation Base, was established in March 2019. For the approved Hong Kong and Macao innovation and entrepreneurship projects, only 1 yuan is charged for the rental area within 200 square meters for at least three years.

The Global Times learned from the base's management office that it has attracted nearly 40 Hong Kong/Macao enterprises with high growth in furniture to settle down, cultivated one unicorn seed enterprise and three high-tech enterprises.

In addition to the "one-yuan rent," the efficiency and convenience brought by the continuous integration of the industrial chain innovation chain in the Greater Bay Area has also benefited start-up enterprises from Hong Kong and Macao. Zhou Cong, a project manager from Guiku Technology, a company Manufacturing automatic camera focusing equipment and producer of Huawei, had been working and living in Hong Kong for seven years. He felt a big difference after starting up his business in Zhuhai.

"We mainly develop and manufacture advanced cameras and semiconductor assembly equipment. There is often some equipment for mechanical processing. If it is in Hong Kong, it may take a week or even a month. However, Zhuhai is close to Zhongshan and Shenzhen, and there are many manufacturing factories. It's efficient, the drawings can be sent out in the morning and the equipment can be obtained in the afternoon," Zhou said.

As one of the youths who benefited from one of the key measures of companies in Shenzhen to recruit young people from Hong Kong and Macao, the 27-year-old Cathy working for Laipic human resources department, said it would be a trend for more intellects from the SARs to move to the mainland, especially for entrepreneurs to start businesses and work in Shenzhen.

Like any other person who leaves their hometown, the biggest concern for young people from Hong Kong who want to work in the mainland is moving away from their parents and home, Cathy said.

The Global Times' visit to Shenzhen and Zhuhai is part of the themed activity of "Sharing the same heart with Guangdong, Hong Kong and Macao; Joining hands with the Greater Bay Area" held by the Cyberspace Administration of China.