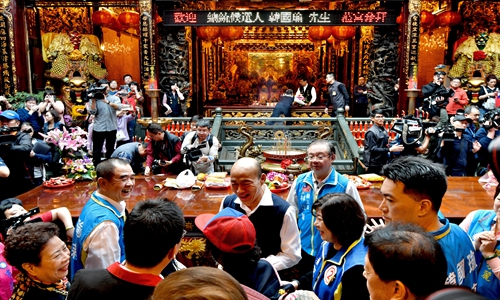 Han Kuo-Yu (center), "presidential candidate" for Taiwan's main opposition Kuomintang (KMT) party, is greeted by the supporters while visiting Chingan temple on the campaign trail in Keelung on Tuesday, ahead of the Sunday "presidential" and parliamentary elections. (Photo: AFP)

Taiwan's regional elections will be held on Saturday, but compared to previous elections, the Chinese mainland society showed less attention to it.

On Friday, a day ahead of the elections, the topic "Taiwan 2020 election" received 5.63 million views on the mainland's Twitter-like social media network Sina Weibo.

Compared to the "how bad the forest fire in Australia is," which got more than 690 million views on Sina Weibo, and "US, Canada, UK all claim Iran shot down airliner" that received 130 million, the Taiwan elections is not a hot topic at all, even though Taiwan is an internal Chinese affair rather than news in other countries.

Song Luzheng, a research fellow and expert on Taiwan studies at the China Institute of Fudan University in Shanghai, said this means "due to the overwhelming power advantage, the mainland is able to unilaterally push forward the reunification process and cross-Taiwan Straits exchanges regardless of which party and politician rule the island in next four years."

"So no matter who gets elected, from the mainland's perspective, the policy toward Taiwan won't be impacted much," he noted.

Many Western media and most Taiwan local media confidently predicted the pro-independence Democratic Progressive Party (DPP) will win, and the current leader Tsai Ing-wen will get re-elected.

Song told the Global Times that the Brexit referendum and the 2016 US presidential election had shown that most polls were wrong, and now Taiwan island's election may have some similarities.

Some Taiwan media also predict that the election will "make Beijing the biggest loser," saying the Hong Kong turmoil has damaged the image of the "one country, two systems" and "the fear toward reunification among the Taiwan youth will increase the DPP's advantage."

However, in the mainland, more and more people, especially those on social media, also "support the DPP" but for a very different reason.

These people believe that the DPP could actually speed up the process of reunification since its separatist stance might one day cause a military solution by the mainland, and they are disappointed by the KMT which prefers to maintain "the status quo" to ask for economic benefits from the mainland but makes no concrete effort to push for reunification.

Before the reunification, "we'd like to see the DPP push so-called 'Taiwan-independence' as much as they can and destroy the KMT, which is an obstacle for the mainland to decide on military-based reunification.

If the DPP can finish this job, that would be good," said a researcher who holds this thinking, at a Beijing-based institute on international security studies, though this way of thinking is not the mainland's official stance and the mainland government always stresses peaceful reunification is the best option.