An online game that insinuates China is the birthplace of COVID-19 and supports Taiwan and Hong Kong secessionists has been removed from the Chinese mainland while still being accessible to overseas players after mainland players exposed and boycotted it. 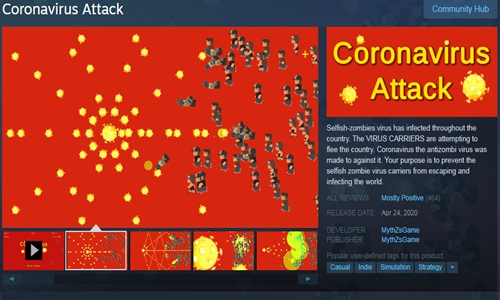 Game "Coronavirus Attack" (Photo: Screenshot of the game on Steam)

The shooting game, "Coronavirus Attack," priced at 15 yuan ($2.11), was developed by a US company and released on April 24 on the Steam game platform. "The selfish zombie virus has infected the country. The virus carriers are attempting to flee the country. Your aim is to prevent the selfish zombie virus carriers from escaping and infecting the world," read the game description.

The developer of the game, MZ, a secessionist resident of the island of Taiwan, posted on April 9 that he/she got inspiration from the Danish cartoonist Niels Bo Bojesen, who used five novel coronaviruses to depict the five stars on the Chinese national flag. The game uses a similar drawing.

According to several screenshots and video clips released on Steam, the game features crude and simple graphics, while the flashing background is bright red and the novel coronavirus is drawn in bright yellow.

Players who reach a certain level can unlock achievements, with one called "Taiwan does not belong to China" and another supporting Hong Kong secession.

The game immediately provoked a large backlash among Chinese players.

As of press time, 138 netizens criticized the game in simplified Chinese. One player said incompetent secessionists could only get a sense of achievement from such a virtual game, which is "funny enough." Some also condemned the game developer as being shameless, while others urged Steam to remove it.

Some criticized the game developer for malicious and groundless insinuations that that the birthplace of the coronavirus was China.

Meanwhile, some pro-secessionist media in Taiwan ignored the facts and called the game "extremely favorable."

The Global Times reporter found at about 10:00 am on Sunday that players on the Chinese mainland could not access the game, while the game remains available to overseas players.

The game developer, MZ, also uploaded it onto Google Play in order to enable more people to join the game and humiliate China. After three weeks of review, his application was rejected for its inappropriate content.

Previously, Taiwan-based game developer CrazyGhost developed a similar game, but due to the issue of image copyright and Google Play policy, the game was withdrawn and subsequent development was stopped. MZ said in his statement that the game was also inspired by CrazyGhost's games.