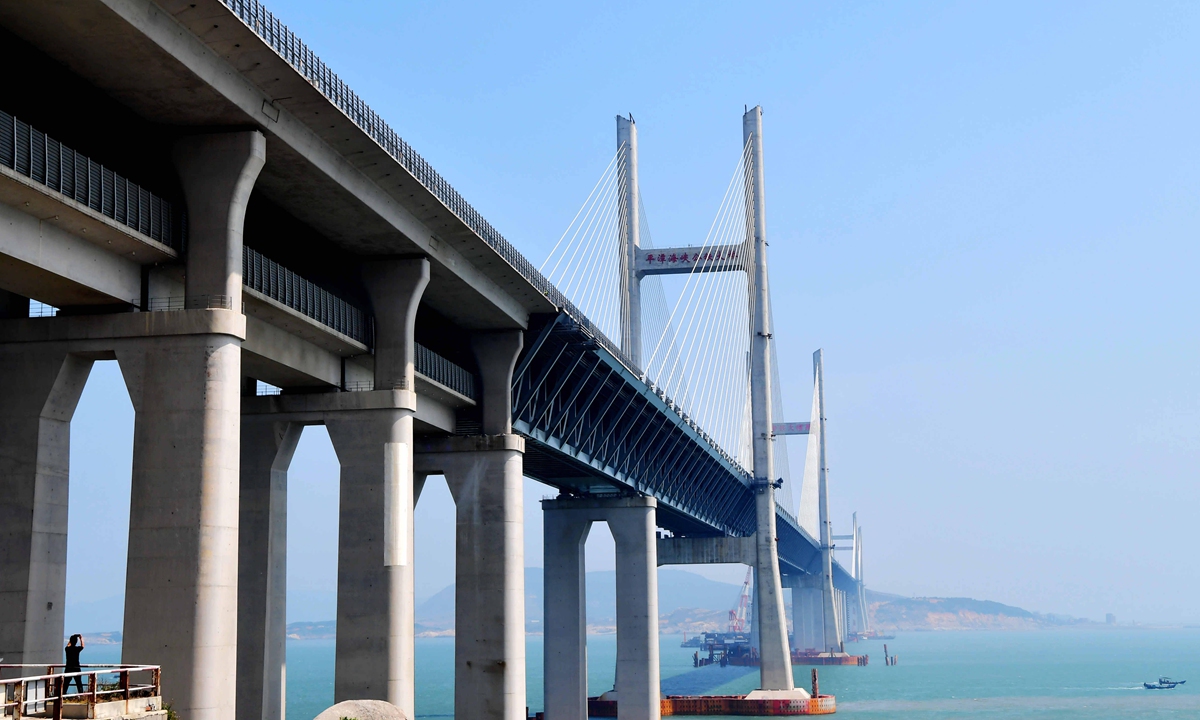 As the Taiwan Affairs Office of the State Council responded to the latest progress in the project, the Mainland-Taiwan tunnel and bridge, an issue that has gone through generations of Chinese people, has again become a hot topic of discussion.

Despite opposition from secessionists on the island, as well as economic and technological challenges, observers said the idea embodies the goodwill for peaceful reunification and the eager desire of Chinese people across the Straits to communicate, especially during times of tension.

In a press briefing on Wednesday, the spokesperson of the Taiwan Affairs Office Zhu Fenglian said that the Chinese mainland is planning and promoting cross-Straits transport infrastructure construction, and in Pingtan, East China's Fujian Province, the section of the cross-Straits highway and railway bridge has been fully connected.

Fujian has completed the preliminary technical plan for the bridge with Kinmen and Matsu, Zhu said. Furthermore, the construction of the Fuzhou to Taipei branch line has been included in the National Comprehensive Three-dimensional Transportation Network Planning Outline for the period from 2021 to 2035, jointly issued by the Communist Party of China Central Committee and the State Council, the cabinet, in February.

However, the mainland affairs office in Taiwan responded on Wednesday that the island has no intention to collaborate on such a project and has never discussed the issue of cross-Straits infrastructure construction.

Instead of technical and economic challenges, political factors are the main obstacle to cross-Straits transport infrastructure construction, Ge Yaojun, a vice head of the International Association for Bridge and Structural Engineering and senior professor at Tongji University in Shanghai, told the Global Times on Thursday.

In a seminar participated in by mainland experts on Monday on Pingtan island, Fujian, the closest place in the mainland to Taiwan, Ge unveiled his team's plans for a 122-kilometer bridge and tunnel project from Pingtan to Taiwan's Hsinchu.

"The cost of the Mainland-Taiwan tunnel and bridge project would surpass 400 billion yuan ($62.6 billion)," Ge said. "Despite the harsh natural conditions, the Taiwan Straits is still suitable for building a land route, based on current technology."

Although the full project is not yet under construction, the mainland has built up the infrastructure for future connections of its road and rail networks to the island, Ge said.

Two bridges linking the mainland and Pingtan island have been completed. One is a road bridge that opened in 2010, and the other is a highway and railway bridge, which was completed in 2020.

Nowadays, trains from the mainland can run all the way from Beijing to Pingtan island, just across the Taiwan Straits from Hsinchu, Wu Zhiming, a engineering expert at Tsinghua University, who is regarded as the first person to propose the idea of a Taiwan Straits tunnel in 1996, told the Global Times on Thursday.

Since 1998, the mainland has held 12 seminars on cross-Straits bridges and tunnels, during which experts considered drawing ideas from the Channel Tunnel between UK and France. They also considered the construction of extra-large span suspension bridges, and building artificial islands to complete a combination of the underwater tunnel plus bridges.

"This is a huge project and the feasibility study will take a long time… Due to cross-Straits relations, our exploration is hindered now, as we only have access to geological data from the mainland," Wu said.

But the good thing is the connection between Xiamen and Kinmen. "Kinmen has a better relationship with the mainland. The bridge design scheme of the Xiamen-Kinmen cross-sea bridge has come out and entered the engineering stage," Wu said.

As for the importance of the Mainland-Taiwan tunnel and bridge, experts said the project, which is expected to take more than 10 years, will mean a continuous flow of traffic across the Straits.

After the opening of the Mainland-Taiwan tunnel and bridge, fresh products from Taiwan can be shipped to the mainland in less than an hour by train. The two sides will be grouped into a 24-hour economic zone, much like the Hong Kong-Zhuhai-Macao Bridge for the Guangdong-Hong Kong-Macao Greater Bay area, Wu said.

"So I think the mainland's plan showcases the desire for peaceful reunification and the pursuit of common development across the Straits… It's just a matter of time, and it's not something the pro-secessionist Taiwan authorities can obstruct," he said.

Some observers suggested that there is no need to link the construction period with the reunification timetable. Besides, short-term plans can be made before the mega project, such as copying the train-ferry service linking Hainan island and Guangdong Province in South China. In this way, the two sides of the Taiwan Straits may realize railway transportation earlier than 2035.

Taiwan not only has standard-gauge rails for high-speed trains, but also narrow-gauge rails for ordinary trains. The mainland could consider adding narrow-gauge rail lines to Pingtan island, so that the Taiwan railway can be reached from Keelung port or Taipei port by ferry, Wang Yu-Chin, a Taiwan cross-Straits observer who lives in the mainland, told the Global Times.

The island of Kinmen, which is near Xiamen, could be a test bed for an early rehearsal of the mainland's management of Taiwan's railways, Wang said.