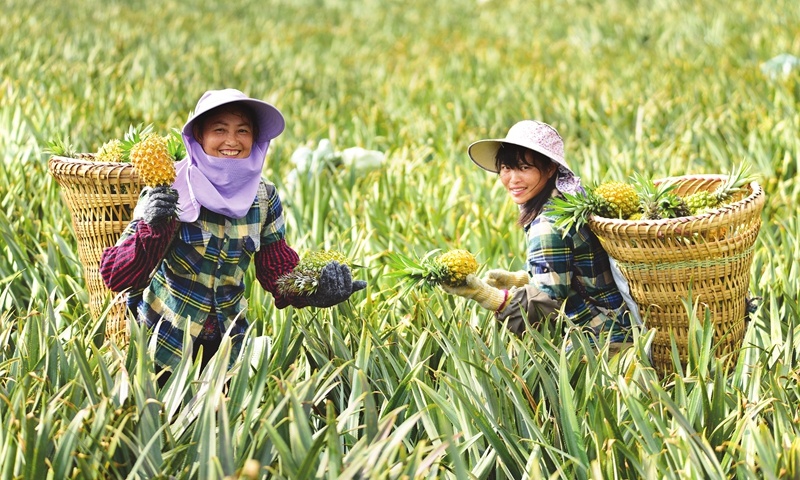 Women harvest pineapples in Shan'gen county, South China's Hainan Province on Sunday. Local farmers are busy harvesting pineapples that are being shipped to markets including those in Northeast China. The province, one of the country's main pineapple-growing regions, has seen the tropical fruit's prices nearly double this year. (Photo: cnsphoto)

The Chinese mainland's latest import ban on pineapples from Taiwan is "normal biosafety control measures which is scientific and evenhanded," a spokesperson of the Taiwan Affairs Office of the State Council said on Wednesday during a press conference.

She made the comment after the import ban, which took effect on March 1, triggered some complaints among Taiwanese politicians that the mainland government had used the ban to punish the island and bully Taiwanese farmers.

According to Zhu Fenglian, the spokesperson, mainland authorities had identifiedthat Taiwan-grown pineapples have a greater risk of carrying plant-based pests, and therefore made the decision to suspend importing Taiwan pineapples to protect mainland's agricultural production and ecological safety.

Zhu also noted that the mainland had informed Taiwan of the pest problems but had yet to receive any feedback from Taiwan addressing the problem.

"Responsible departments in mainland have reported to Taiwan island about 28 batches of identified pineapples and cautioned them to strengthen source management, however they did not reply to those warnings and the disqualification problem has yet to be addressed," Zhu said.

Earlier, the General Administration of Customs issued a notice on February 26 saying that imports of Taiwan pineapples were suspended because inspectors repeatedly found pests such as the planococcus minor on Taiwan pineapples since last year.

According to Zhu, mainland has been taking active measures to assist Taiwan farmers in solving difficulties and further developing mainland markets. When Taiwan met problems selling agricultural products, it was also mainland that offered a helping hand to buy products and bring concrete benefits to the farmers.

"The Democratic Progressive Party(DPP) is shutting the door to solving problems by politicalizing technological problems and blackening mainland," Zhu said.

According to media reports, Taiwanese authorities have called on residents to support farmers by buying and eating domestic pineapples to make up for their losses caused by the ban.

But Zhu said that Taiwanese authorities were simply engaging in token gestures. "It's not difficult to solve agricultural safety problems from the source, but the key problem is that the DPP has no even the slightest intention to care for local farmers."