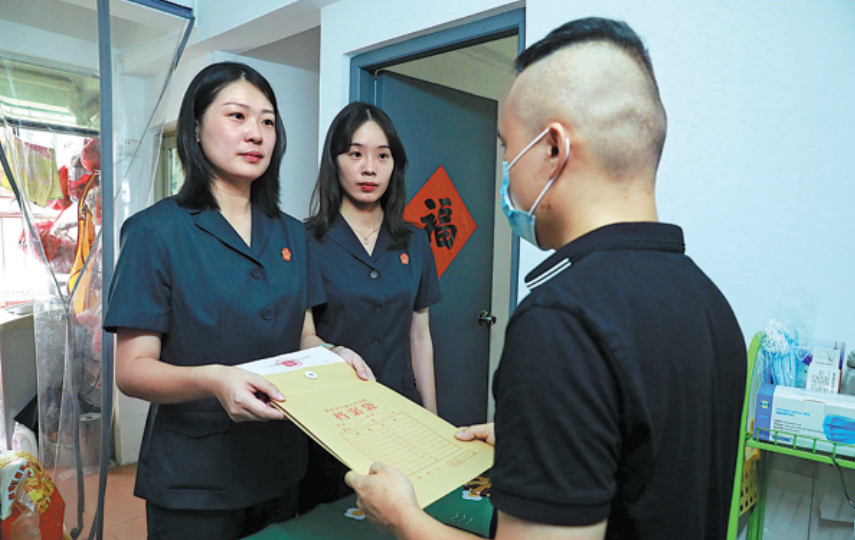 Former business owner Liang Wenjin breathed a sigh of relief when he received a written judgment from the Shenzhen Intermediate People's Court on Monday.

It approved the 35-year-old's debt restructuring plan, signaling an end to incessant calls from multiple creditors since October.

The judgment will allow Liang to concentrate on paying his debts according to the plan. He and his family－his wife, two children and two elderly parents－will have to lead a frugal life for the next three years, at least.

A veteran engineer with two patents, Liang founded a technology company in 2019 to produce Bluetooth headsets and other products.

Due to insufficient understanding of the market, and affected by the COVID-19 pandemic, the company lost money and Liang had to borrow from banks and internet loan companies. He had been unable to pay interest on the loans on time since October.

Liang ended up owing 750,000 yuan ($115,600)－including principal and interest－to 10 creditors, and filed a bankruptcy application to the court on March 10.

"I can now put my heart at ease as my family will not be mired in snowballing debts," Liang said.

The regulation gave Liang the chance to be exempted from the debt interest and to get rid of pressure from creditors. The court has fixed the scale of his debts and the interest will no longer accumulate.

His wife agreed to share the debt with him and they will need to pay off the principal of about 500,000 yuan in three years with their current assets of 90,000 yuan and monthly income, according to the restructuring plan. After deducting 7,700 yuan for basic family expenses, they will pay their creditors at least 21,300 yuan a month.

After paying off the principal in three years, Liang will be able to apply to the court for exemption from paying the remaining interest.

Liang, who has been diagnosed with cancerous tumors that require surgery, lives with his family in a house in Shenzhen's Xixiang district that they rent for 1,900 yuan a month.

He said the regulation provides more safeguards for people whose businesses run into trouble, offering them support to get out of debt crises.

Liang was one of over 1.24 million self-employed individuals in Shenzhen to have registered a business in the city. They accounted for 37 percent of the more than 3.33 million businesses registered in Shenzhen by March 25 last year, according to official data.

There are also numerous freelancers and people involved in e-commerce services who are not normally registered on the books but also make up a major part of the city's workforce.

Ideal result for most parties

Cao Qixuan, chief judge of the Shenzhen Bankruptcy Court at the Shenzhen Intermediate People's Court, said Liang's case, the first to be heard under the new regulation and the first such case heard on the mainland, went quite smoothly because Liang and his family showed a strong desire to clear the debt. It also reached an ideal result for most parties, with the average compensation rate for the 10 creditors reaching 88.73 percent.

Nine of the 10 creditors voted in favor of the debt restructuring plan.

The first case served the interests of both the creditors and the debtor, Cao said, and helped clear debts in an efficient manner, which was important for the smooth operation of the financial system. The regulation also safeguards Shenzhen's vibrant entrepreneurial environment, preventing debtors from being overwhelmed by mounting debt pressure, he added.

Cao said Liang is a typical example of "honest but unlucky" business owners who are in dire need of legal help to get relief from debts and participate in economic activities again.

He described the case as an "initial step in exploring complex individual bankruptcy system reform".

The court has received about 600 individual bankruptcy applications, most filed by middle-aged or young entrepreneurs. After background checks, it selected 30 cases to investigate and accepted seven.

Du Yanzhi, a lawyer at Jingtian Law Firm and also the bankruptcy administrator of Liang's case, said the personal bankruptcy regulation served a social need. She helped Liang choose proper ways to clear the debt, design the restructuring plan and negotiate with creditors.

Besides the self-employed, many shareholders and guarantors of companies who have heavy personal debts after enterprise bankruptcies also need the regulation to get relief, Du said.

She said that compared with enterprise bankruptcies, handling personal bankruptcy cases involved certain difficulties, especially in investigating the composition of debt and property.

"Whether from the point of view of the nation's comprehensive environment, an individual businessman's demands, or the development of our market economy, establishing a personal bankruptcy system is of great necessity," Du said.

The ruling in Liang's case also guarantees the interests of creditors. Since the launch of Shenzhen's individual bankruptcy regulation, there have been concerns expressed by some that the regulation favors the interests of debtors, as it allows them to be exempted from some debts with conditions, but two bank representatives rejected those concerns.

Chen Ruiying, general manager of the legal and compliance department at Ping An Bank's credit card center, said the bank voted in favor of the restructuring plan, given Liang's strong initiative and sincerity to pay off the debt. Liang owed the bank over 103,000 yuan on an overdrawn credit card.

Liang's restructuring plan proposed reserving a very small portion of monthly income for basic expenditure, with the majority used to repay debt. The regulation would have allowed him to pay off the principal in no more than five years, but he set the deadline at three years to speed up the process.

Chen said the regulation offered a more effective approach for banks to handle distressed debts. Previously, they could only keep reminding debtors to pay debt on time via calls and messages, which had little effect.

The regulation had shifted liability for personal debt from unlimited to limited, which was a major breakthrough, she said. The shift placed higher requirements on banks' credit risk control and distressed debt management abilities, and Ping An was making the relevant adjustments.

Xia Feng, who works at Industrial Bank's Shenzhen branch－another creditor in the case－said it is currently quite easy to apply for a credit card, and that added to banks' difficulties when investigating distressed debt.

She added that the regulation includes strict restrictions on high-level consumption during the observation period of three to five years, which could help prevent people from repudiating their debts and protect creditors' interests.

Chen and Xia both said they would like to see more effective measures to stop debtors from cheating or using tricks to avoid paying debts.

Cao said the Shenzhen court is preparing to establish an alliance to prevent and punish such acts, in collaboration with other departments in Shenzhen.