Mainland spokesperson urges US side to stop official exchanges with Taiwan

BEIJING, May 20 (Xinhua) -- A Chinese mainland spokesperson on Wednesday urged the United States to respect the basic norms of international relations and stop any form of official exchanges with the Taiwan region. 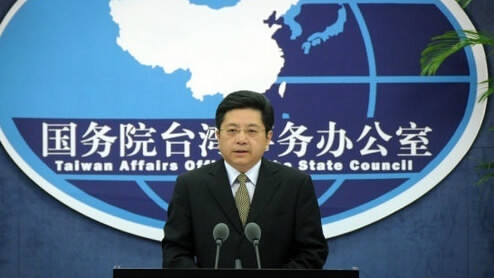 Ma Xiaoguang, a spokesperson for the Taiwan Affairs Office of the State Council, made the remarks in responding to a query about U.S. Secretary of State Mike Pompeo's statement congratulating Taiwan leader Tsai Ing-wen on her inauguration.

Ma also urged the United States to adhere to the one-China principle and the three China-U.S. joint communiques.

Stressing that both sides of the Taiwan Strait belong to one China and that Taiwan is an inalienable part of China, Ma said the mainland has a firm will, full confidence and sufficient capabilities to defeat any interference by foreign forces and any secessionist attempt for "Taiwan independence" in any form.

"We will take all necessary measures to safeguard China's sovereignty and territorial integrity, and consistently advance national reunification," said Ma.