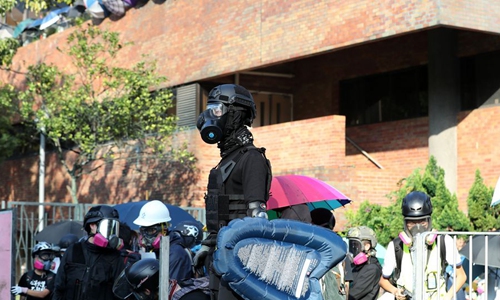 A masked rioter is standing out among his group in a standoff with police outside the Hong Kong Polytechnic University, Hong Kong, South China, November 17, 2019.  (Photo: Xinhua)

Some mainland universities have tightened enrollment requirements for Hong Kong students for the next academic year amid the city's ongoing social unrest, with several demanding a review of applicants replacing previous test-free policies and stressing "one country, two systems."

Universities including Tongji University in Shanghai and Fuzhou University in East China's Fujian Province clearly stated in their 2020 enrollment plan that Hong Kong applicants have to uphold the "one country, two systems" principle and the Basic Law.

An employee at the admission office of Tongji University said the requirement was added this year after considering a number of students in Hong Kong participated in the six months of protests.

Tang Fei, a member of the council of the Chinese Association of Hong Kong and Macao Studies, told the Global Times on Monday that mainland universities should place such requirements as supporting "one country, two systems" and the Basic Law is the basic political requirement.

He said that the new requirements by some mainland universities aim to prevent a very few applicants from allegedly spreading secession ideas to the mainland.

Without stressing such a requirement, that may send a wrong signal to Hong Kong candidates that they can support secession while enjoying preferential policies in mainland universities, he said.

A teacher with the admission office at Jinan University said Monday that the review applied to students who graduated from Form six in secondary schools and those with a higher academic background.

"We will review their academic transcripts as well as their performance at schools," the teacher said.

She noted that applicants who participated in the protests in Hong Kong will not be considered.

Students who graduate from Form six in secondary education or with a higher academic background from Hong Kong, aged 30 or younger, without a criminal record and holding proper identification documents are eligible to apply for the 2020 academic year, according to the university enrollment plan.

The university has 5,554 students from Hong Kong, the highest of all mainland universities, media reported.

Such changes are unlikely to affect the overall admission of mainland universities in the next academic year, Tang said.

In general, the number of higher education institutions in the mainland admitting Hong Kong students in 2020 will increase by 11 to 122, the education bureau of the Hong Kong Special Administrative Region government said in November.