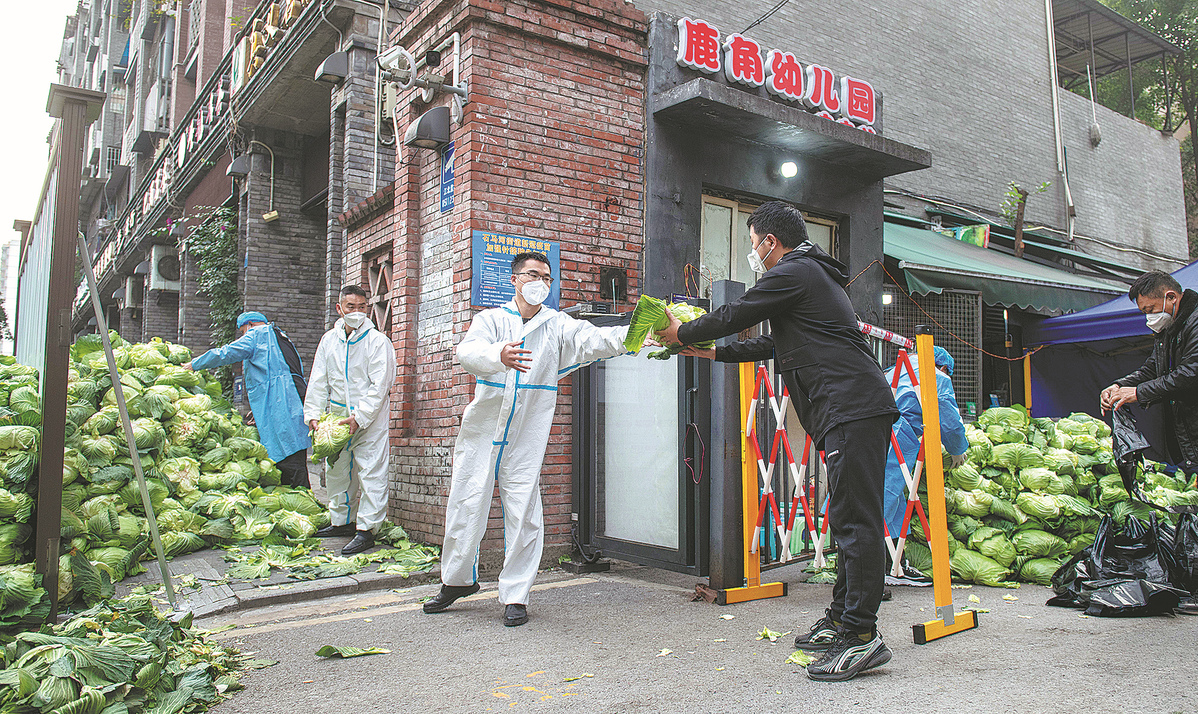 Volunteers pass cabbages donated by a resident for his neighbors quarantined at home in Chongqing on Tuesday. (Photo: China Daily)

Beijing is still facing the most complicated and severe epidemic control situation since the COVID-19 pandemic began in 2020, with the number of infections at the community level continuing to rise with slight fluctuations, Xu Hejian, spokesman of the municipality, said at a news conference on Wednesday.

"The epidemic control work in the capital is still at a critical stage," said Xu, adding that Beijing reported more than 1,000 infections each day on Monday and Tuesday.

Between midnight and 3 pm on Wednesday, Beijing reported 913 locally transmitted COVID-19 infections, with 640 of them asymptomatic carriers. Among the total infections, 148 were detected at the community level.

In response, a makeshift hospital located at the China International Exhibition Center in Shunyi district has been put into use to receive patients with mild symptoms.

Confronted with a similar situation, the municipality of Chongqing has built more makeshift hospitals.

It has seen infections surpass 6,000 for three consecutive days, according to figures released by the Chongqing Health Commission.

In addition to makeshift hospitals, authorities in Guangzhou, Guangdong province, have established a special task force consisting of senior medical experts from major hospitals to help treat patients and guide treatment in designated and makeshift hospitals.

These experts are from severe disease, infection, respiratory and related medical departments, plus departments of traditional Chinese medicine.

"We always put medical treatment first while continuing to make great efforts to implement and further optimize the prevention and control measures for COVID-19," said Zhang Yi, deputy director and spokeswoman of the Guangzhou health commission.