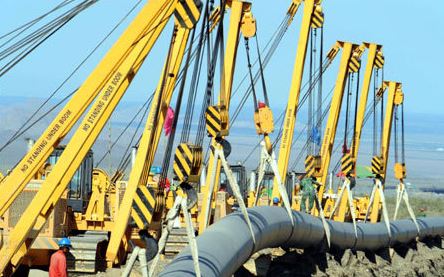 BEIJING, Jan. 11 (Xinhua) -- Over the past year, a group of cross-regional projects has witnessed China's pursuit of high-quality development through optimizing water resources, boosting sustainable development and improving people's lives.

The operation of China's south-to-north water diversion project, the world's largest, entered its sixth year in 2019, bringing huge benefits for the populous yet water-stressed nation.

Since Dec. 12, 2014, the first phase of eastern and middle routes have delivered roughly 30 billion cubic meters of water to the country's north and directly benefited over 120 million people.

It has served as a lifeline of water supply for over 40 large and medium-sized cities and 260 counties as these areas started to use the "southern water," according to Vice Minister of Water Resources Jiang Xuguang.

Meanwhile, the project effectively curbs the trend of groundwater level decline and deterioration of the water ecological environment, with the areas of rivers, lakes and wetlands expanded significantly.

The project has also facilitated economic growth, industrial upgrading and ecological improvement in regions along the routes.

China's longest and largest gas pipeline, known as the west-to-east gas pipeline, has opened an era of natural gas for China and optimized the country's energy structure since it was officially put into operation in 2004.

The over-4,000-km pipeline project takes the Tarim Basin as the main gas source and the Yangtze River Delta as the main target market to form a natural gas supply network across the west and east of China.

By October 2019, the Tarim oilfield in Xinjiang Uygur Autonomous Region had provided over 240 billion cubic meters of natural gas, benefiting 400 million people and 3,000 enterprises in more than 120 cities.

The west-east power transmission, another giant program, has helped solve the problem of unbalanced power supply.

It is one of the largest power grids in the world with three power transmission routes in the north, middle and south. Local power grids had generated massive electricity.

Among them, southwest China's Yunnan Province sent a record amount of electricity of over 140 billion kWh to the eastern regions in 2019.

Sichuan Province, also in southwest China, has sent a total of over 1 trillion kWh over the past years, 10 times of the annual power output of the Three Gorges hydropower station, the State Grid Sichuan Electric Power Company said.