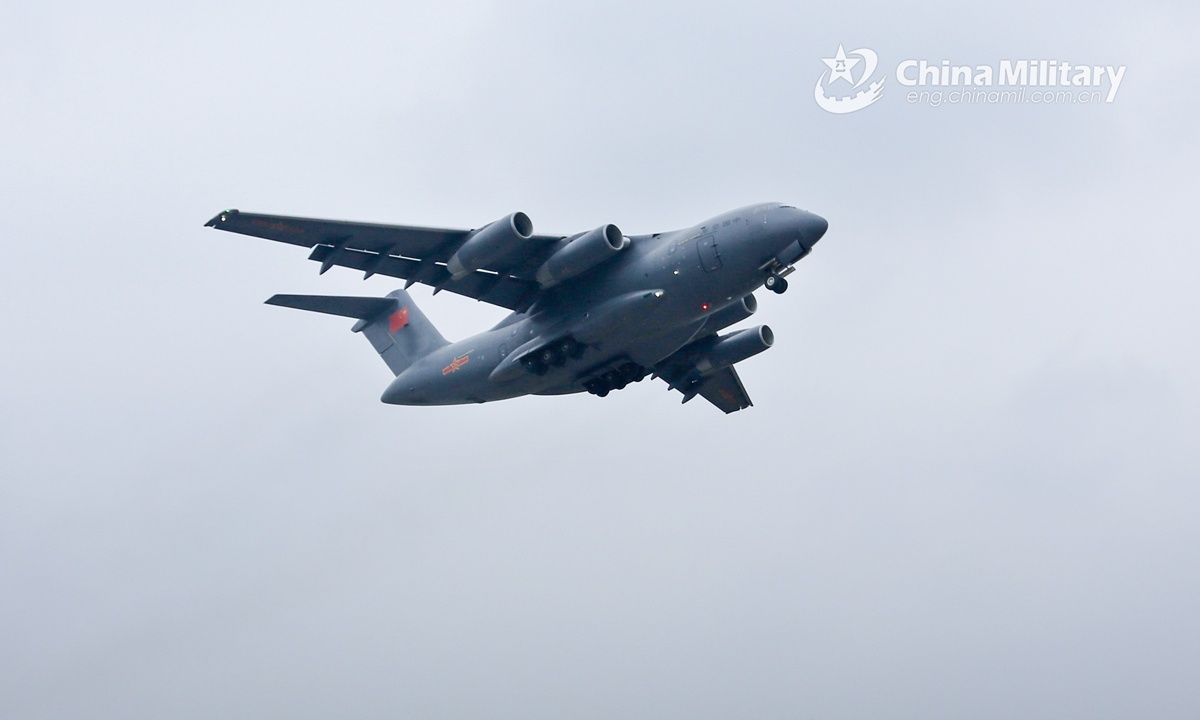 A Y-20 large transport aircraft attached to an aviation division under the PLA Western Theater Command flies at a predetermined altitude during a flight training mission on January 4, 2021. (Photo: eng.chinamil.com.cn)

China's Y-20 large transport aircraft is expected to switch to domestically developed engines with a high bypass ratio, according to media reports after the aircraft's maker gave a hint in a cartoon.

The official Weibo account of the state-owned Aviation Industry Corporation of China (AVIC), the maker of the Y-20, released last week a cartoon of the Y-20 with four big wine barrels covering its engines.

The wine barrels resemble engines with a high bypass ratio and the cartoon could be a hint that the Y-20 will soon be equipped with this type of engines, eastday.com, a Shanghai-based news website, reported on Friday.

Unverified photos and videos of a Y-20 with serial number 7810 have been circulating on social media since this year. The engines of this particular Y-20, dubbed by military observers as the WS-20, are shorter but have a larger diameter than the current ones in service, meaning they have a higher bypass ratio, the eastday.com report said, noting that the AVIC's Weibo post could be the first confirmation on these speculations.

With the new engines, the Y-20 will get a boost in not only range and endurance, but also in cargo capacity, eastday.com predicted.

In a program aired by China Central Television in November 2020, Chinese military experts also revealed some new information on the WS-20. Song Xinzhi, one of the experts, mentioned that compared with the Russian D-30 engine currently used on the Y-20, the Chinese engine is much larger in diameter and can provide more powerful thrust, uses less fuel, and enables the plane to take off and land in shorter runways.

In the future, the Y-20 will be produced in large numbers using Chinese-developed engines to serve as a platform that can be developed into different variants, like an aerial tanker or an early warning aircraft, Wei Dongxu, a Beijing-based military expert, told the Global Times.