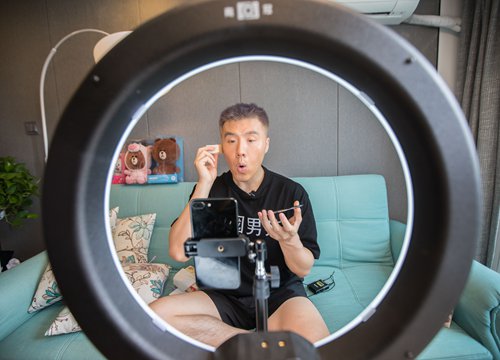 Wang Xiaoqiang, a makeup blogger from Hangzhou, Zhejiang Province, is making a video for his millions of fans. Photo: VCG

In a newly published video on Weibo, China's Twitter-like microblog, Fang Junping, who has flawless skin, neatly parted hair and wears a white lab coat, drew a few marks on the back of his hands with lipstick, then applied two different makeup cleansers. He rubbed his hands together, then rinsed under a sink.

He then showed his hands to the camera: One still had faded red marks, the other was completely clean. Fang then went into detail comparing the two products, analyzing the ingredients of each one, and concluding one of the brands is more superior.

Fang Junping, or "Junping the Devil," as he calls himself on Weibo, has more than 4 million fans. He regularly publishes videos explaining different skin products and does advertisements for his online shop and cosmetics brands. In comments, he also receives lots of questions related to fashion or beauty.

Male beauty bloggers and vloggers like Fang are becoming more common in China. They've driven up the market on male cosmetics, leading a new trend in fashion.

This is a shift from only a few years ago, when men in Chinese society were basically asked to be macho and rough, a demonstration of their masculinity. Even though some criticize and even taunt these beauty vloggers, they are becoming more and more accepted, and are changing the definition of male aesthetics.

Fang created a spa shop in Hangzhou, East China's Zhejiang Province, in 2007, then created his own cosmetics brand, Junping, in 2013. However, for a few years neither his shop nor his social media accounts promoting his brand were receiving much attention.

Netizens shared the video and his Weibo fans increased from 60,000 to more than 1 million. "I was too stunned to react," he told technology media website ikanchai.com.

Fang dove into the world of cosmetics, learning about different treatments and ingredients and the application of different products. He learned the difference between lotion, cream and essence. He also had to look exquisite himself for fans.

"After I became popular, I couldn't be as rough around the edges as I used to be, I had to go to activities and buy clothes," he told ikanchai.com.

Some vloggers are even bolder. Benny (Dong Zichu), who has 1.7 million fans on Weibo,  calls himself "Benny bitch." In his headshot, he leans against a windowsill, bathed in sunlight, accentuating his trimmed eyebrows, eyeshadow and pinkish lips.

In his videos, he has dramatic hand gestures, makes bold, sharp comments and offers relentless criticism on what he doesn't like.

"A 40-year-old woman's skin is like a dried up wheat field. Promise me, when you come to France, please buy this product," he wrote in a post promoting Visoanska masks.

This doesn't stop his followers from liking him. "Your skin is so smooth that I started doubting myself," one user commented.

"Your posts drove up the mask sales in my shop," a Taobao shop owner commented.

Reports by e-commerce platforms and companies reflect the trend as well. Last year before its June 18 annual sale, China's e-commerce giant JD.com released a report describing the trends in cosmetics sales in 2016 using big data. It concluded that men and women have increasingly closer consumption levels.

Its data showed that in 2015, each male consumer spent 26.6 yuan ($3.97) on average less than females on cosmetics, while in 2016 the gap shrank to 13.7 yuan. For male customers who are between 19 and 25 years old, 44 percent of their money is spent on facial skin care products, way more than the 29 percent on shampoo and conditioning.

A 2018 report by Guangzhou-based e-commerce platform VIPS estimated that as of now, the market for men's skincare products in China has reached 10 billion yuan and will reach 15.4 billion yuan in 2019.

In the past three years, the number of male users of VIPS has doubled and 96 percent of those have bought clothes and cosmetics on the platform.

In 2017, Maybelline found its first male spokesperson for its Big Shot mascara, an internet celebrity named Manny Gutierrez, who has millions of fans on Instagram and YouTube and regularly releases videos on cosmetics tips.

In China, this trend started over the last couple of years. Young male actors started appearing in skin product and cosmetics advertisements, which in turn had driven up sales. 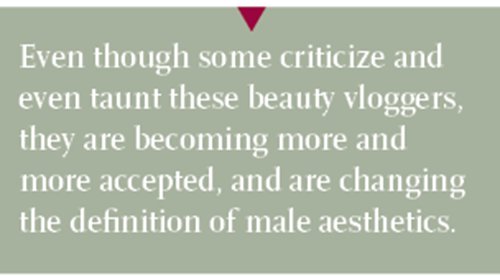 Such demands existed around the world, said Fang Gang, sexology professor at Beijing Forestry University. In the West, there's demand for men to be dominant, and acts of masculinity today are equivalent to bravery back in ancient times, especially on a battle field.

"In that case, wearing makeup would be representative of a woman's gentle nature; all they had to do is be pretty. This came from traditional cultural and historical backgrounds," he told the Global Times.

Media reported a school in Nanjing held an educational forum for boys in 2015, teaching boys how to be "manly," saying the line between the two genders is becoming blurrier.

In fact, each summer always sparks discussions on Chinese university campuses about the right of men to walk in the sun with an umbrella - an act deemed "girly." Every year on internet forums, there are posts initiated by men asking whether there are women who would like to "share an umbrella" with them on campus, so that they can be shielded from the sun.

"When a man shares an umbrella with his girlfriend, nobody says anything. But if it's 40 degrees Celsius out, and a man holds up an umbrella for himself, he is mocked?" one man said in one of the posts. "So men are doomed to have more tanned skin? They just can't love beauty or protect their skin?"

Last year, when one of the TFboys, Wang Junkai, turned 18, his fans spent more than 10 million yuan playing videos on LED screens and buses across the world. They rented hot air balloons flying banners in Turkey, and had planes skywrite his name over Hollywood.

This is also the case in neighboring countries, and their culture is influencing the youth in China.

In Japan, new trends such as jendaresu-kei (genderless style) have started to become popular. This trend rejects gender identities but is different from cross-dressing. Men dye their hair, and wear colored lenses, nail polish and cosmetics. Young male bloggers and vloggers have accumulated hundreds of thousands of fans.

During the current World Cup tournament, the Korean goalie Cho Hyun-woo became an internet sensation for his delicate cosmetics and tidy hairstyle. Some Chinese netizens even joked, "He must've applied a lot of hair gel in order to last a 90-minute game."

As diversity becomes more and more embraced by the public, this mindset is fading, Fang said. He thinks it's a good trend.

"The appearance of these vloggers demonstrates this point, as well as the fact that men can be exquisite as well," he said.