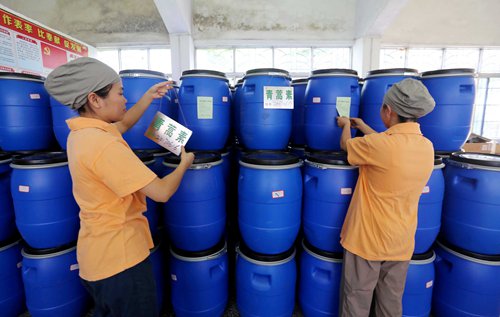 The Chinese medical community is facing another ethics controversy since the gene-edited twins case after a Chinese medical team reportedly conducted a malarial treatment trial on cancer, a therapy that has been opposed in the US. Patients flooded hospitals involved in such a trial after reports of it swept Chinese social media, thepaper.cn reported Friday. Some of the reports said a malaria parasite could cure cancer. The trial was conducted by a team led by Chen Xiaoping, a research fellow at the Guangzhou Institute of Biomedicine and Health under the Chinese Academy of Sciences. The team on Thursday released a notice, saying that they had recruited enough volunteers and reminded patients to stay calm. "The malarial treatment is still at an early stage of research," the notice said.The first batch of volunteers had already received treatment and the second one hasn't begun, thepaper.cn reported.But medical experts questioned the ethical review of the trial. Insiders reached by Global Times said that ethics reviews of clinical trials in China should be done by the medical institute that conducts the test, not a third-party committee. The ethics review of the trial by Chen, however, was approved by the Chengdu-based Chinese Ethics Committee of Registering Clinical Trials in 2017, which is owned by West China Hospital of Sichuan University, thepaper.cn reported.Qiu Zongqi, the first Chinese laureate for the Avicenna Prize for Ethics in Science, told the Global Times on Tuesday that using the ethics committee of its own medical institute ensures the trial's quality and efficiency. But Qiu noted that some ethics committees lack ethics review training and are poorly managd, which have led to the cases of edited babies and the use of a malaria bacteria to treat cancer. Liu Ruishuang, a professor at Peking University's Institute of Medical Humanities and member of the university's ethics review committee, told the Global Times on Tuesday that China is thinking of revising the ethics review regulations to meet the current scientific research demand.After the gene-edited baby experiment by Chinese scientist He Jiankui broke out, former vice minister of health Huang Jiefu said in an exclusive interview with the Global Times that a national-level authority and an improved legal system are needed to supervise biological and human experiments.As early as 1993, when US physician Henry J. Heimlich was encouraging the use of malaria to treat Lyme disease and AIDS, the practice was reviewed by disease control and prevention officials as "cannot be justified," according to a New York Times report in 2003.