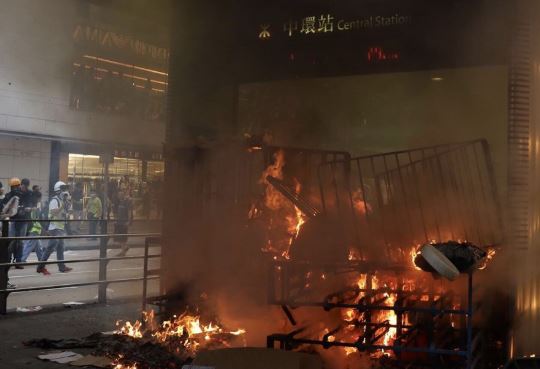 HONG KONG, Sept. 11 (Xinhua) -- Persistent rumors and fake news have exacerbated social tensions and whipped up violent activities in Hong Kong over the past three months.

Much of the misinformation has been used by radical protesters as pretexts to resort to more violence, slander police and government authorities, and stir up hatred. Hong Kong authorities have made tremendous efforts to provide the facts and stop people from engaging in speculation.

A large part of the daily press conferences held by the Hong Kong police was spent on clarifying various types of unfounded comments about police operations. Though police spokespersons repeatedly refuted these allegations, some media chose not to believe in facts but stuck to their own perspectives.

Recently, the opposition and radicals spread rumors about the protester death at Prince Edward MTR station on Aug. 31. Taking this claim as an excuse, radical protesters surrounded and attacked the Mong Kok police station, and went so far to attempt setting up a "mourning hall" at the MTR station.

On Tuesday, a joint press conference by the police, hospital authority and fire department laid bare the facts, saying neither Mong Kok Police Station nor the police missing persons unit had received any report of missing persons in connection with the incident on Aug. 31.

A total of 53 people were arrested at Prince Edward MTR station on the night of Aug. 31, including seven people who needed to be sent to hospitals for treatment.

The opposition hyped up another incident that a female police officer had strip-searched a female protester for 15 to 30 minutes. The Hong Kong police then clarified that they checked related documents and the CCTV record, and found that the level of the search was not the "3C" level which requires a strip search; the whole search took four minutes.

Deliberately misinterpreting photos and videos of police operations is another common practice to cook up false accusations against police. A photo of a police officer "hitting" non-protesters with his shield had been widely used as proof of police brutality. Video footage later revealed that the officer was holding his shield up to protect passersby as he escorted them out of the danger zone.

During a demonstration in Sheung Shui, a protester tried to jump from a six-meter footbridge to flee the police but was saved by several riot police officers who rushed to hold him. The photo was put online but captioned wrongfully saying the police were trying to push the protester off the bridge.

Agitation and mud-slinging against officers have been recurrent. During a protest at Tsuen Wan on Aug. 25, some violent protesters hurled petrol bombs at the police. However, CNN released a story headlined "Police use petrol bombs and water cannons against Hong Kong protesters," citing a widely circulated tampered video. CNN later apologized for its "erroneous" headline and replaced it with a correct one.

In another broadly circulated photo, a rioter carrying a gun on his waist was throwing a petrol bomb at the police on Aug. 31. However, the picture was used by the opposition as an "evidence" of police personnel disguise as protestors.

In response, the police denied the allegation and said the police did not use the gun carried by the protester. "These vicious slanders are despicable attempts to smear police officers who act in strict accordance with the law," said Tse Chun-chung, chief superintendent of the Hong Kong Police Public Relations Branch.

The opposition can be very "creative" in smearing the Hong Kong police and the Hong Kong Special Administrative Region (HKSAR) government, including the "smart lamppost" conspiracy, in which the lampposts installed to collect air, traffic and weather data were said to be "monitoring" protesters.

The government had explained that the cameras of the lampposts are set to face public areas only and do not carry any facial recognition function. Rioters nevertheless took down one lamppost and damaged 19 others. The total repair fees amounted to 2.8 million Hong Kong dollars (about 360,000 U.S. dollars).

Misleading information has been rife on social media in recent days in an attempt to sow fear among the public and attack the police and the government. Without a punishment scheme in place against fake news, many local media have actively disseminated false information and flooded the public with a misinformation storm.

Local residents said the rumors are unfounded and some are absurd. "The protesters not only said people died in the Prince Edward MTR station. They said they saw a ghost. They are insane," said a resident surnamed Lee who lives nearby.

"Both the hospitals and the police have published their reports saying no person died at the station. Why should I not trust the authorities, and get led away by these rumors?" said another resident surnamed Kwan.

"These rioters occupied roads and smashed MTR stations. Ordinary people can not take the metro. They dare not go out in public on weekends. The rioters say this is all for the future; what future do they have if they keep causing so much damage to Hong Kong?" Kwan asked.

Police authorities have launched ten anti-violence hotlines to collect information, including photos, audio and video clips via WhatsApp to assist in the prevention and detection of possible crimes.

The increasing number of negative, violent and fake information has exacerbated social tensions, said Yip Siu Fai, a professor at the University of Hong Kong.

At a press conference Tuesday, HKSAR Chief Executive Carrie Lam urged the public to carefully discern the information they received.

The HKSAR government will try its best to provide a timely account of information and facts, Lam said, adding that a special section has been set up on the government's website to clarify rumors at a timely manner.