Man attempts to kill pregnant wife by pushing her off cliff 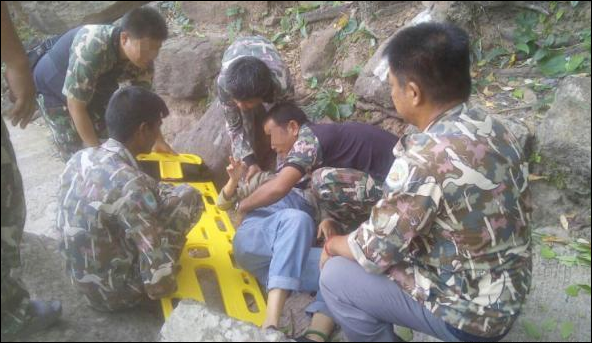 A Chinese man has been detained in Thailand on suspicion of attempted murder of his pregnant wife during a tour to the tropical tourist destination, Beijing Youth Daily reported on Friday.

The woman who only gave her surname Wang is three months into pregnancy. Early this month, Wang and her husband went on a trip to Thailand.

On June 9, as they were visiting the Pha Taem National Park, Wang fell off a 34-meter cliff and suffered severe injuries, including extensive and serious bone fractures and dislocations on the left side of body.

She was found soon and received treatment at an intensive care unit at a local hospital. Later she told the Thai media that it was her husband who had pushed her off the precipice.

She said her husband hugged her from behind and kissed her on her face before pushing her off the cliff.

In a later interview with Beijing Youth Daily and other Chinese media on Thursday afternoon, Wang said she got married in July 2017 with the man surnamed Yu two months after meeting him, although she knew that he had served an eight-year prison term for robbery.

Afterwards, she discovered that her husband was addicted to gaming and gambling and was in heavy debt. Yu told Wang that he owed more than one million yuan ($145,564). But according to Yu's parents, he owes around two million yuan.

Wang said it was the pressure of debts that made Yu desperate. "If he can make everyone believe that I had fallen and died in an accident, then he will be able to inherit a part of my fortune. I indeed have a reasonable amount of savings and real estate properties," Wang told Beijing Youth Daily.

As to the pregnancy, she said she has not decided what to do with it, but she was concerned whether the large amount of medication she was taking would have a negative impact on it. She said her husband showed little appreciation when he heard about the pregnancy.

Despite having difficulties in making physical movements, she and her baby were not in fatal danger, according to local reports in Thailand.

She lost consciousness on Thursday evening and remained in semi-coma until Friday, Wang's mother told reporters at 16:00 on Friday.

Currently Wang's parents are taking care of her in the Thai hospital. They arrived in Thailand on June 15.

Yu has not pleaded guilty and has applied for bail twice, but both times his appeals have been rejected.