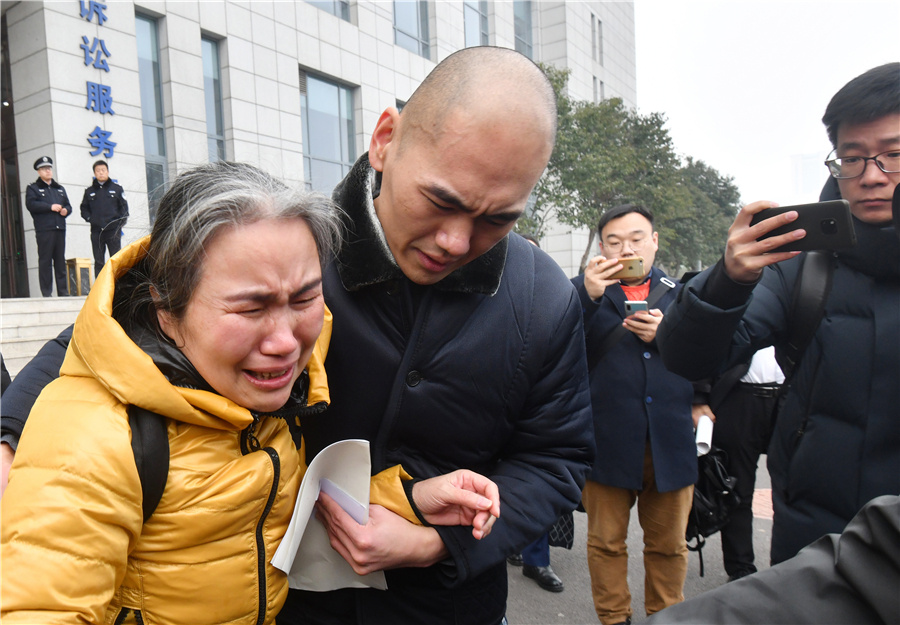 Zhang Zhichao and his mother, Ma Yuping, leave court on Jan 13, 2020 in Zibo, Shandong province, after he was found not guilty in a retrial of a rape case that had sent him to prison at age 16. [Photo by Wang Hanbing/For China Daily]

Zhang Zhichao, who spent more than a decade in prison for rape, has applied for about 7.89 million yuan ($1.1 million) in compensation after he was found not guilty early this year due to insufficient evidence.

The claim for State compensation includes about 1.89 million yuan for Zhang's wrongful detention, which lasted about 14 years, and 6 million yuan for his mental anguish, the lawyers said, adding that Zhang had also asked the officials responsible for his case to publicly apologize to him through the media.

"We decided to ask for that amount of compensation because Zhang suffered great pain after he was wrongly detained," Yuan said. "Because of the wrongful conviction, Zhang's reputation was damaged, and his family members, including father and grandparents, all passed away while he was serving the prison term."

In addition to the compensation application, Zhang, now 30, also asked the lawyers to take a letter to the court. In the letter, he said: "I spent my best time, from my teenage years to youth, in prison. If I was not wrongly convicted, I might have studied at a college, have my own family and be living a good life as others do."

Zhang is recuperating at home, according to his mother, Ma Yuping.

On Jan 13, the Shandong High People's Court overturned an original ruling in which Zhang was given life imprisonment for raping a girl, and acquitted Zhang after a retrial, because the evidence in his case was not strong enough to convict.

In January 2005, the body of a missing girl was found in a restroom at a high school in Linshu county of Linyi, Shandong. Zhang, then 16, was named as the suspect and detained by local police.

In March 2006, Zhang was convicted of rape and sentenced to life in prison by the Linyi Intermediate People's Court. Another man, Wang Guangchao, who was identified as having helped Zhang cover up the offense, was given a three-year sentence with a three-year reprieve.

Zhang was unhappy with the ruling and said he was tortured during police interrogation.

After frequent appeals by Zhang's mother, the Supreme People's Court, the country's top court, demanded in 2017 that the Shandong High People's Court rehear the case.

Two years later, the court retried the case, with prosecutors suggesting that Zhang and Wang be acquitted due to insufficient evidence.

As an influential example of correcting miscarriages of justice and protecting human rights, the case was included in the work reports of the top court and the Supreme People's Procuratorate, which were submitted to the National People's Congress, the country's top legislature, for review in late May.