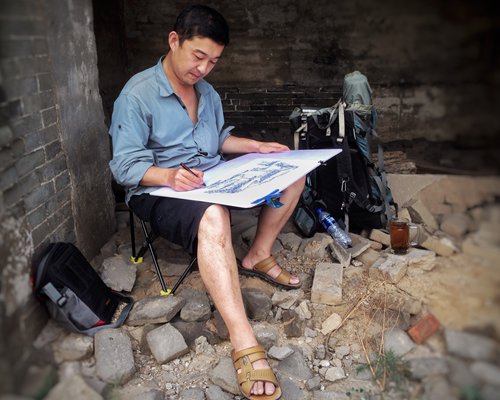 Compared with photos, the ink sketches made by Lian Da have a distinct beauty. When the old buildings are separated from their modern surroundings and illustrated with clean lines and intricate details, one is able to better revel in the atmosphere of history.
Lian, aged 40, has drawn over 1,000 on-site sketches of ancient architecture in Shanxi Province. But no one who has seen his sketches would expect that the artist is a mere amateur who spends his days running an interior design shop with his wife in Dalian, Northeast China's Liaoning Province, over 1,000 kilometers away.
Braving muddy village roads and poor living conditions, Lian visits rural Shanxi twice a year so that he can search for the province's ancient architectural treasures before they are lost forever to looting and development, a passion he has pursued for 19 years.

Hidden gems
Shanxi Province is considered "the museum of ancient Chinese architecture." According to media, the province preserves more than 70 percent of old wooden-structure buildings of China constructed during or before the Yuan Dynasty (1271-1368), and older buildings like the Foguang Temple, built in 857, and the Nanchan Temple, built in 782.
Lian's passion for ancient buildings started in 1999 during a trip to the province. He was captivated by these grand buildings, but not content with taking photos, he began to sketch them on site using simple ink pens.
In the beginning, he stayed in Shanxi for 10 days, drawing one to two sketches daily.
In 2007, Lian found that many famous ancient buildings, such as the Jin Temple, had been well preserved and protected. But the lesser-known and smaller temples in nearby villages were left to rot away, scavenged by treasure hunters or bulldozed by developers. He started to focus on these hidden gems before they disappear.
"Every time I visit, there are surprise findings. An old warehouse might be a piece of architecture from the Ming Dynasty, or a vacant residential house might be from the Yuan Dynasty," said Lian.
But disappointments are also frequent. Shanxi's architectural treasures are severely plagued by looting, theft and lack of conservation, all due to poor government supervision and weak law enforcement.
Lian cannot remember how many times he searched for an old building only to find that it had been looted or dismantled. In some places, stone pedestals to wooden columns had been stolen; without proper support the structure will eventually collapse. The ornaments and tiles on some old roofs are also often missing, which exposes the wooden beams to rain and corrosion.
Some ancient buildings have been purposely destroyed by the local government in the name of "protection" due to their lack of conservation awareness. Wooden temples, for example, are rebuilt with cement, and thousand-years-old columns and walls with inscriptions and artwork are covered over with garish red paint.
"They look like fake relics from a movie set. The cultural value and historical message in these buildings have been permanently ruined," he said.
What's more heartbreaking for Lian is the ignorant attitude of the local people toward these treasures. Lian said that many villagers living in old buildings are embarrassed by their antique homes. Some tell Lian to visit again after they have saved up enough money to rebuild a new brick house, which they do not understand is completely contrary to what he is looking for. 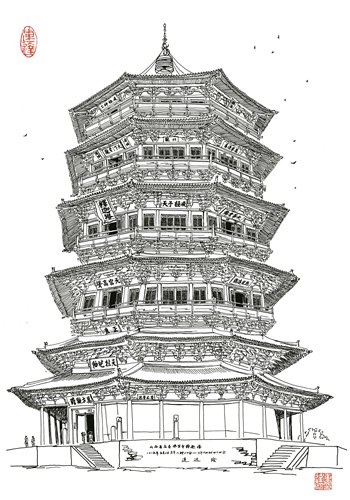 Fame and helplessness
Over the years, Lian has built up a following on social media and has published three books featuring his sketches and notes about old buildings.
His latest book, Discovering Ancient Temples in Shanxi, was given a favorable review by lovers of ancient architecture. He has also been invited by universities to share his experiences and ideas on relics conservation.
However, as he acquires fame, Lian also feels a sense of helplessness. Last month, while doing on-site sketches in Yuxian county, Lian encountered two temples dating back to the Yuan dynasty, both in bad repair and on the verge of collapsing.
He later found that the temples were already recognized as historical and cultural sites at the local level, but apparently, nothing had ever been done for their conservation. Such findings often put Lian in a personal dilemma. While there are many things he can do to potentially protect them, none seem to be the perfect choice.
He could contact the local government, but past experiences show that they will most likely be unresponsive. He could contact grass-roots conservation groups or NGOs, but in recent years the reputation of these organizations has been tainted after some were found stealing the relics. He could post pictures of the temple on his social media sites and call for social awareness, but that would court attention from thieves.
"For many years I have been debating with myself what I can do for these architectural gems. In the end, I have come to accept the fact that the best role I can play is to be a mere recorder," he told the Global Times.
His next step is to visit sites in the north of the province. For the two temples, he decided that less publicity is probably the best. Although there is little he can do for their actual conservation, Lian said he will stick to his specific mission to document as many old buildings as he can while they are still standing. 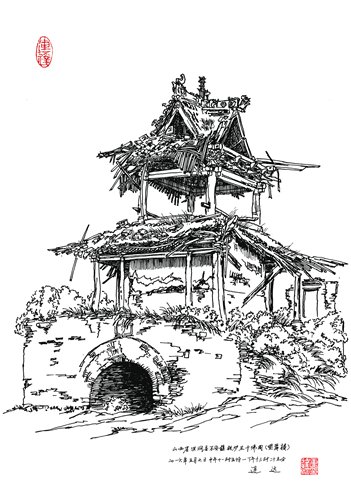