Police in southwest China’s Sichuan Province said on Wednesday they had issued an administrative penalty to a man accused of illegally spreading the personal information about a COVID-19 patient online that led to harassment against the latter. 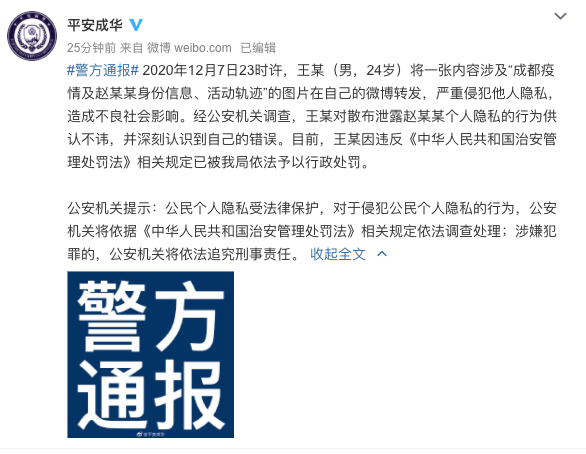 The Chenghua branch of Chengdu’s public security bureau said that the man surnamed Wang posted a picture on social media containing identity information and daily movements of a woman surnamed Zhao, who was confirmed as a COVID-19 patient on Tuesday.

Police said Wang’s invasion of others’ privacy caused hostile effects in society and that Wang has admitted to his wrongful deeds.

The statement did not mention the exact nature of the administrative penalty, which could range from fines to detention.

The police action followed heated discussions online surrounding Zhao, who reportedly visited several bars in the 14 days before her diagnosis.

While some netizens defended her movements as typical in the city known for its vibrant nightlife, others lambasted her for spreading the virus through her party lifestyle.

Zhao, on Wednesday, issued a statement via a media outlet, saying she had been receiving harassing texts and calls. The victim of cyber violence said she worked in the bars and was unaware of her grandmother’s COVID-19 diagnosis, from whom she probably contracted the infection.

“I saw a torrent of online rumors about me, many of which were slanderous and abusive,” the 20-year-old said in the statement released on news aggregator Toutiao.

“I truly don’t understand why so many people attacked me. I just caught the virus. I am also a victim.

“I cooperated with the epidemiological investigation the instant it was confirmed. I reported my whereabouts truthfully in order to prevent the virus from spreading.”

Zhao said her symptoms are mild and urged the public to wear masks and avoid crowds.

No new COVID-19 cases were reported on Wednesday in a mass screening that followed six confirmed locally transmitted cases earlier this week. As of 9pm on Wednesday, 739,000 people had been tested, with 399,300 returning negative.