CHINA Man sentenced to death for murder in China

Man sentenced to death for murder in China 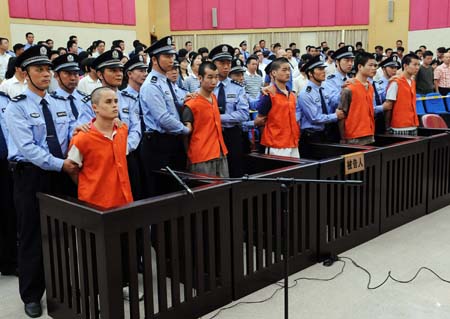 A court in northwest China's Shaanxi Province has sentenced a man to death for the murder of five members of a family, including two children. Liu Chenpeng broke into a house in Yanta District in the provincial capital of Xi'an, tied up householder Wang and his two relatives with tape, and left with cash and bank cards on June 24, 2016, said a statement issued by the intermediate people's court of Xi'an City. After withdrawing 18,000 yuan (2,860 US dollars) from an ATM, Liu returned to the house and killed the three plus Wang's baby daughter and son, according to the statement. He was found to have used the cards several times to withdraw a total of 32,500 yuan. Police arrested Liu on July 2, 2016, and the court ruled the case on Sunday. Liu withdrew his previous confession in court.