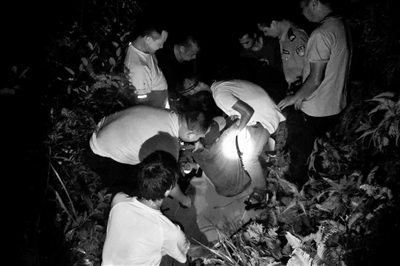 Man trapped for half month was rescued on Aug 12, 2018. (Photo: Qingtian Police Department)

For two weeks, Gao Henan, 28, was trapped in the mountains near Qingtian County after having his foot maimed by a device used to hunt wild boars. By the time he was found – Gao had lost more than 180 pounds since his only food was wild fruit and bugs, according to Beijing Youth Daily.

Zhejiang Qingtian police, who helped rescue Gao with help from a local man, said that Gao’s left foot might need to be amputated due to infection and necrosis.

They also said that national laws prohibit traps of any kind for hunting and are investigating the source of the device that injured Gao.

On the afternoon of August 12, Zhao Yonggui, who lives in Qingtian County in Zhejiang Province, said he and several friends heard cries for help while they were fishing on the Oujiang River. Zhao said the shouting was sparse and did not respond when he or his friends tried to locate the source of the SOS.

Eventually, Zhao and his friends left home for the day since the cries for help stopped. However, Zhao returned later in the day and once again heard the pleas for help – prompting him to seek help from police.

Zhao said the police were impeded since the Oujiang River in that area has no major roads for rescue vehicles, so they had to wait for a police boat for help.

“We had been calling to the other side for a long time and no one responded,” A police spokesperson said. “We are worried that there is something unexpected. We quickly contacted the fishing boat to cross the river.”

After hours of searching, the police eventually found Gao with a badly wounded leg – but no maiming device in sight.

"When we found him, he was already thin and only had bones left, but his mind was still awake and his voice was still quite powerful." Zhao said.

According to Gao, he left Qingtian County for Lishui City on July 28 to look for work when he got his foot caught in a device used to trap wild boars.

Gao had no phone to call for help and claimed that he could not free himself from the device – even with the aid of a nearby iron bar.

Gao told hospital staff he originally weighted around 280 pounds when he set out on his journey and now weights less than 100 pounds thanks to having only bugs, wild fruit, and spring water as his sustenance for two weeks.

By Tuesday, Gao was able to contact his family and was transferred to a hospital in Hangzhou City.

Zhao said the mountains where Gao was trapped is filled with animal traps since the area is heavily populated with boars. Yet the police are baffled because they could not find the hunting trap that wounded Gao.

To make matters even stranger, Gao said the owner of the trap eventually found Gao and released him – but refused to take him to the hospital and instead left him in the mountains to die.

Now police investigating Gao’s claims and attempting to find the mysterious hunter who left the trap.