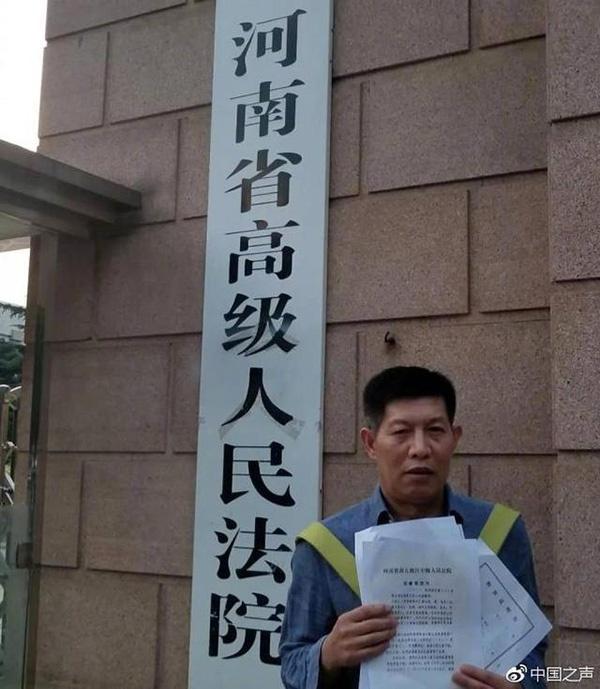 Zhang Yuxi, a resident of Xiayi county, Henan province, was acquitted of a charge of intentional injury by a local court on Tuesday after being released 18 years ago on bail pending trial.

Zhang was involved in a dispute in 1992 with another resident, Zhang Gongshe, which led to violent scuffles between members of the two families. Zhang Gongshe's father, Zhang Chaoming, was rendered unconscious during the fight and died.

Zhang Yuxi was later detained and prosecuted on a charge of intentional injury in 1997. According to the indictment by the local prosecutor, Zhang Yuxi hit Zhang Chaoming's forehead with an iron rake, causing the older man to fall into a coma and later die.

The local court sentenced Zhang Yuxi to 11 years in prison in 1997 and he appealed.

In October 1997, the Shangqiu Intermediate People's Court ruled that Zhang Yuxi's case was unclear and the evidence was insufficient, and it revoked the judgment and sent the case back for retrial.

In 2001, police detained Zhang Yuxi's cousin Zhang Shengli in Zhejiang province on charges of being involved in the fight. The local court found Zhang Shengli was guilty of killing Zhang Chaoming and sentenced him to 13 years in prison.

Zhang Yuxi, who had been held in custody for nine years, was released on bail pending trial.

Zhang then waited another 18 years - until Saturday, when he received a subpoena from the court ordering him to stand trial on Tuesday.

Zheng Xiaojing, Zhang's defense lawyer, said the trial was focused on finding out who caused Zhang Chaoming's death, and this time their evidence was found to be sufficient.

"The effective judgment in 2001 has already proved that Zhang Shengli was the only individual involved in the killing of Zhang Shengli, so we were confident that Zhang Yuxi is innocent," the lawyer said.

She said the trial being delayed for such a long period of time violated the law, and now that Zhang has been acquitted he will apply for state compensation.

Zhang Yuxi told Ynet.com that he felt very emotional when he received the subpoena.

"I have lived as a suspect. Our farmland has gone. My mother and wife moved away with my two children. After I was released on bail I could only seek a living elsewhere," he said.

Recalling the fight 27 years ago, Zhang said that he had been stabbed in the leg by Zhang Gongshe at the beginning of the fight and he "didn't even know someone was dead" until he was brought to the police station.

"I didn't kill anyone. I should be acquitted. I believe the court will give me justice," he told Ynet.com before the trial.

When asked about his future plans, Zhang said he still wants to go back to the village, build a new house and continue to be a farmer and grow crops.