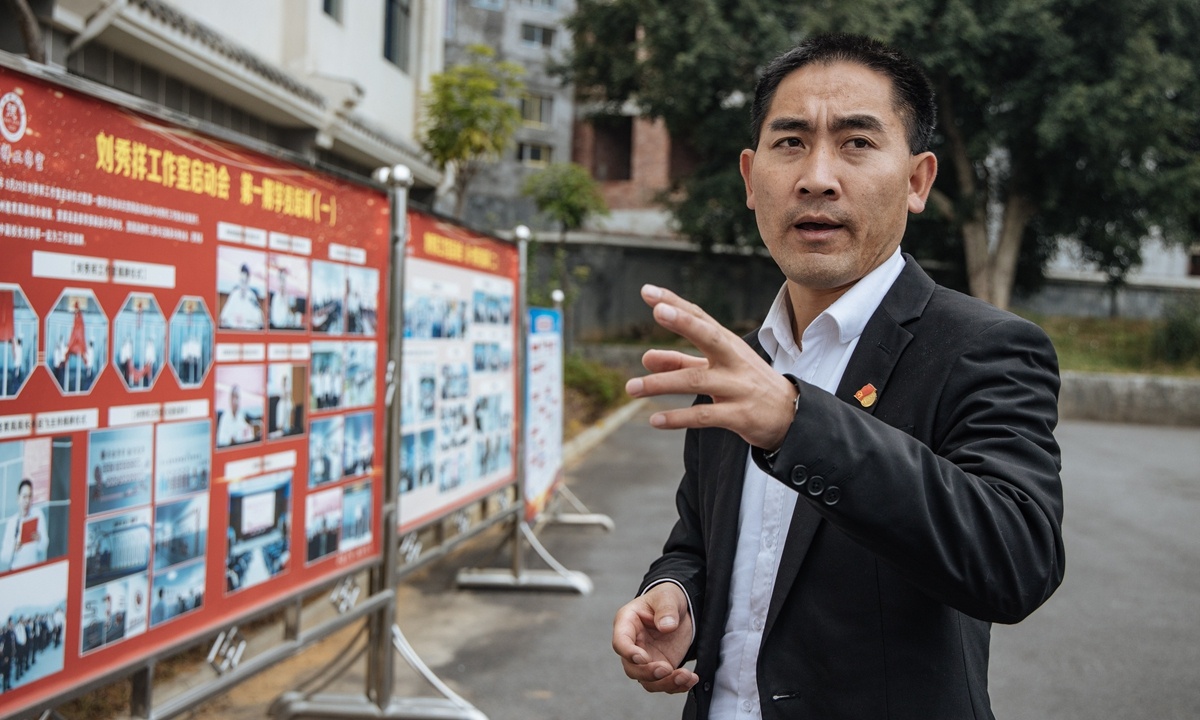 Liu Xiuxiang has had many identities. He was the son who took his mentally disturbed mother to university. He was the graduate who gave up a good offer in Beijing and returned to his poor hometown deep in mountains. Now he is also the nominee of many social awards and is known as "the most beautiful teacher in China."

The honors brought Liu many offers. He could have lived an easy life in big cities, but he chose to not to rely on that.

Now, a headmaster of Experimental High School in Wangmo county in Southwest China's Guizhou Province, Liu is using his abilities to help children living in poverty or difficulties to have more opportunities in education, which could change their fates.

When asked who their idols are, the students the Global Times reached in the Wangmo school would not hesitate to say "Headmaster Liu." They said his stories are motivating more children to chase their dreams. 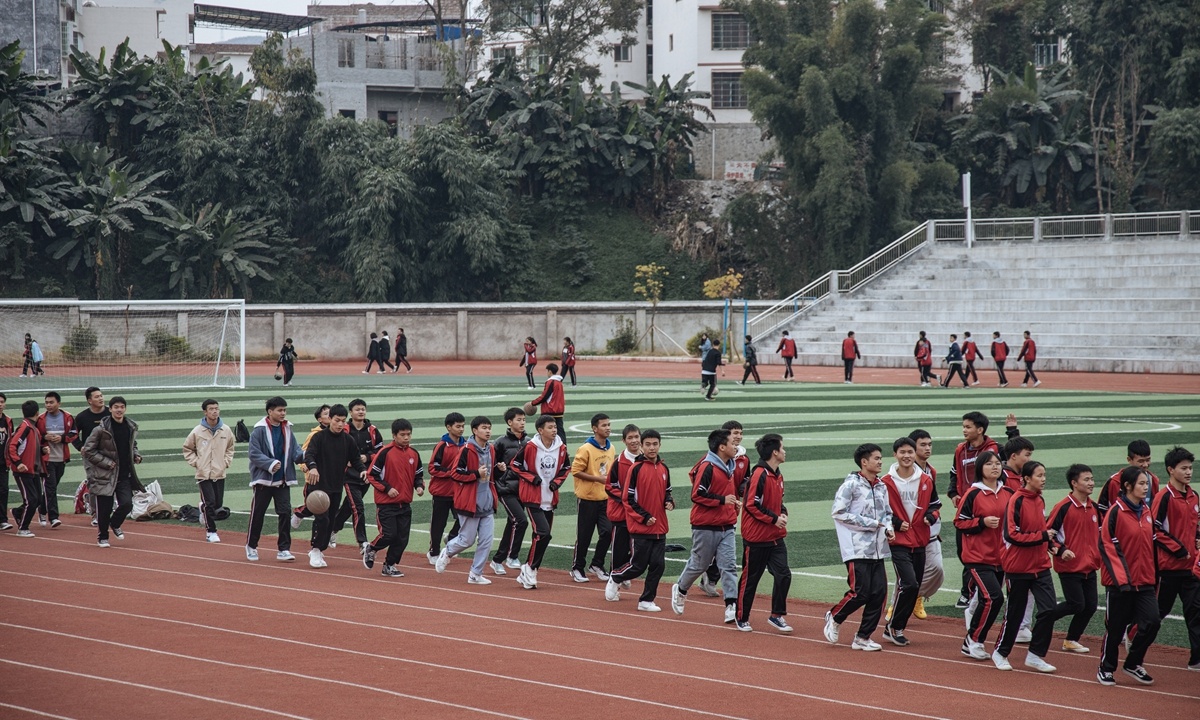 In 2008, Liu became widely known in China for taking his mother, who suffered from mental illness, to a university thousands of miles away from his hometown.

People called him the "good man of China."

He was then offered many opportunities, from financial donations to work positions in big cities, but he turned them down. "I feel it was out of media promotion and the sympathy of the society. [If you took such help,] you might be able to live a bit better, but you will lose your independence," he told the Global Times.

He chose to return to Wangmo to become a high school history teacher.

Liu comes from a poor family. His father passed away when he was four years old. But he said he devoted himself to studying in school, believing it could change one's fate.

When he was in junior high school, he collected waste to exchange for some money in his spare time. There he met three younger friends. "When I entered high school, I reminded them that they must not give up study… but one girl did not make it. She went to work in another city after junior high, which is a huge pity."

But the choice of Liu's friend to quit school early for work helped him understand dreams are more valuable than money.

"Without my dreams, I could not survive any difficulty in my life," said Liu.

Therefore, he decided to return to his hometown after graduation. "I want to come back to tell the children, who are as poor and lost as I was, that life must go with dreams. Once you have your dream, you can fight for it." 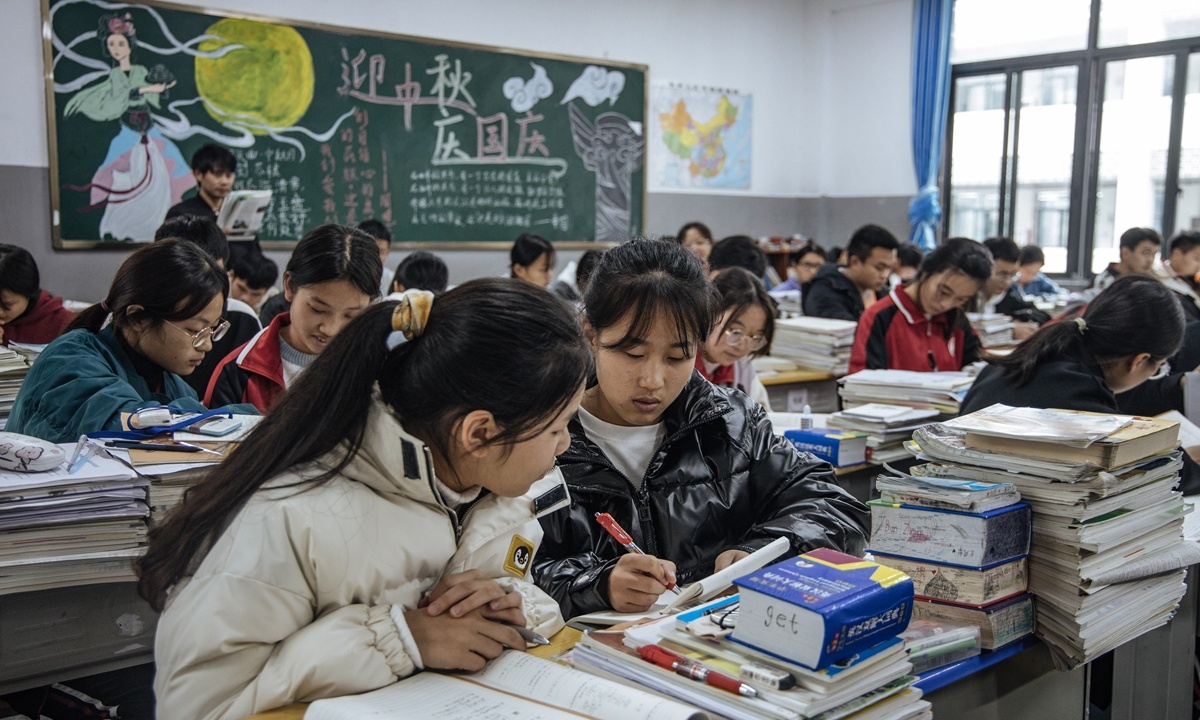 Jump out of mountains

"When I came back to Guizhou, I thought that if I could change one person's fate, then it is worthy enough," Liu said.

After eight years since returning home, Liu is now a headmaster of a newly built high school. He said he has helped much more people than he thought he could.

In a remote and isolated place like Wangmo, many people had outdated ways of thinking, said Liu. It was a common notion that education was useless, especially for girls, who were expected to get married after compulsory education, which ends at junior high school.

That is one reason Liu decided to work in high school education in the county. He seeks to bury the seeds of hope in students in the classroom, telling them to take control of their own lives.

Meanwhile, Wangmo county sees developing education as its key strategy. They gathered education resources and provided children with some of the best teachers and schools for the primary and junior high education.

The county now has six high schools for the convenience of families from rural areas.

In 2012, less than 10 percent of students applying for undergraduate courses could get in. In 2014, things began to change thanks to the county's policy.

But this year, more than 1,200 students out of 1,800 candidates became freshmen of universities, accounting for 63 percent of the total. Wangmo has the highest college entrance rate among the counties surrounding it.

Liu has since begun delivering speeches around the country. At first he denied such speeches, because "no man would show their scars to others." But gradually he found that his story could influence some struggling and lost students, showing them directions and goals.

In May, a workshop named after Liu was founded under the joint support of local government and the government of East China's Zhejiang Province, which is aiding Wangmo.

A key duty of the workshop is connecting donors with students in need, so that the students could receive financial support, or investment as Liu prefers to call it, during their studies in high school and university.

The workshop has helped around 2,600 students in Wangmo as of press time. Among the students Liu has supported, there are some who have entered top universities in China, such as the Tsinghua University and Communication University of China in Beijing.

Liu said that without care toward your community and country, education is useless.

"From the pandemic of this year, and the turmoil of Hong Kong last year, you could see how important it is to have such emotional intelligence in education," Liu said. "Students need to know how to deal with millions of things in the world, and learn to remind themselves at all time about who they are."