In East China's Jiangsu province, many former fishermen had become protectors and patrollers of the Yangtze River even before China began its 10-year fishing ban in Asia's longest river on Wednesday. 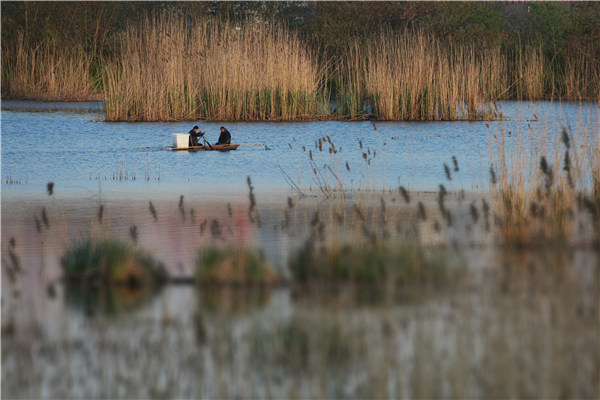 According to the Ministry of Agriculture and Rural Affairs, the ban will affect about 280,000 fishermen and more than 110,000 fishing boats in 10 provincial regions along the Yangtze.

The river flows for 432 kilometers through Jiangsu, and the ban will affect more than 10 cities in the province. It has barred fishermen from catching certain kinds of aquatic products since February, including crab, shrimp, and fish, such as the long-tailed anchovy.

Zhou Qixiang, a fisherman in Tongjin, a village in Nanjing, said that all the fishermen in the village have moved ashore and fishing boats have been dismantled.

"All the licenses for fishing in the Yangtze have been withdrawn, and all the fishermen have been given compensation," he said. "Some people, including me, chose to work for the provincial fishery administration and be protectors of the Yangtze. Now I earn about 6,000 yuan ($860) a month. Some villagers preferred to become vendors of aquatic products or migrant workers in big cities."

In Jiangyin, the local government bought all the fishing boats from fishermen before they were dismantled in 2019. That year, the last group of 54 fishermen came ashore and were given compensation of more than 10 million yuan.

From Wednesday to Jan 12, more than 200 people from the provincial fishery administration and public security and maritime departments conducted a joint operation to crack down on illegal fishing activities.

Chen Jianrong, a director from the Jiangsu fisheries law enforcement division of China Marine Surveillance, said that all the fishing equipment along the river's Jiangsu section has been removed.

"We had spent about four years to remove the equipment," he said. "The banks of the river had endless bamboo poles that were used to fix fishing nets, but now they are rarely seen in the river."

Zhang Jianjun, deputy director of the Jiangsu Agriculture and Rural Affairs Department, said that the fishing ban will greatly improve the river's biodiversity and fish stocks.

"Wild fish from the Yangtze have no better quality than those cultured in other rivers and lakes," he said. "In fact, some cultured crayfish and crabs have better taste and higher safety standards than wild fish in the Yangtze."

Fish caught in the Yangtze now account for only 0.32 percent of China's total freshwater aquatic products. In recent years, the annual catch from the river has fallen to less than 100,000 metric tons from more than 420,000 tons in the 1950s.

In Jiangyin, local fishermen caught less than 0.5 tons of the extremely expensive long-tailed anchovy in 2011, while in 1956 they caught 174 tons of the fish.

Zhang added that scientific departments will continue to monitor and assess the fishery resources and protect aquatic life in the river.