Marijuana smuggling cases from North America to China are increasing 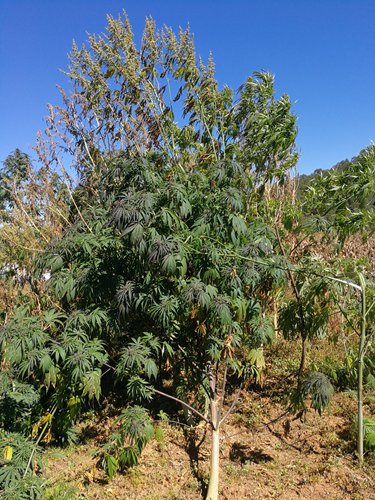 Reports suggesting stoners of the world are getting high off cannabis mass-produced in China miss the point, a State narcotics control official said on Sunday: The psychoactive component in Chinese hemp is so negligible as to render the crop largely useless for that purpose. The cultivation of industrial hemp in China falls under extremely strict supervision and "has nothing to do with global drug abuse," Hua Zhendong, technical director of the National Narcotic Control Commission's National Narcotics Laboratory, said during an exclusive interview with the Global Times on Sunday.Official crackdowns on illegal marijuana target foreign smuggling activities rather than domestic cultivation, Hua explained. Marijuana is smuggled not only in traditional cigarette or resin forms, Hua said, but also in better-concealed brownies, biscuits and chocolate.China's number of people using marijuana remains at a low level compared to that in Europe and the North America, but it is expanding over recent years under the impact of the legalization of the illicit drug on foreign soil.And the number of marijuana smuggling case, especially from the North America has witnessed a constant up, according to the commission. Before 2012, the drug smuggling case from North America regions busted by the China's custom authorities is less than 10 every year, but the number picked up in 2013 and reached 124 in 2017 and first 11 months in 2018, another 97 cases were busted.According to the commission, North American online drug platforms, such as Best MJ and Frontline Releaf, have established special modules for Chinese buyers, featuring Chinese language advertising. The sites offer detailed tutorials aimed at guiding Chinese drug users on how to make a purchase with virtual currency, trade drugs and receive deliveries, which have become an increasingly mature online marketing channel for China.Hua's interview followed a report suggesting China was quietly becoming a cannabis superpower. The Voice of America (VOA) Chinese site posted an article on December 28 alleging that although dama, or marijuana, is a taboo word in China's society, the plant is not. VOA cited a report by the Hong Kong-based South China Morning Post in August 2017 claiming the central government secretly approved a hemp plantation in Northeast China's Heilongjiang and Southwest China's Yunnan provinces."These areas account for about half of the world's legal commercial cropland under hemp cannabis cultivation," the report said. It is not clear why VOA ran the story at the end of 2018 citing a 2017 media report. Such reports failed to differentiate Chinese hemp for industrial purposes from foreign hemp for drug abusers, Hua said. Hemp approved for growth in China is a variety of the cannabis sativa plant with a larger non-pyschoactive cannabidiol (CBD) content, explained Hua, who has a PhD in drug control. The psychoactive tetrahydrocannabinol (THC) content of Chinese hemp "is way below 1 percent," Hua said, and is therefore rarely developed into an illicit drug. Mass plantation of hemp has not outpaced strict official supervision, he said. Seed selection is monitored to ensure low THC content, and official permits are issued. China planted 15,800 hectares of hemp in 2016, yielding 77,000 tons of industrial-use hemp cannabis, according to National Bureau of Statistics data. "The THC component is strictly controlled even under 0.3 percent, and such a crop offers no pleasant sensation," Hu Jiangmiao, an associate research fellow at the Yunnan-based Kunming Institute of Botany of the Chinese Academy of Sciences, told the Global Times on Sunday. The Yunnan hemp has a historic background among ethnic minority communities, Hu noted. "They create high-quality fabric for clothing from the plant and chew the seeds as snacks," Hu said. "No one here in Yunnan is using it to get high."The two varieties of the plant vary obviously, Hu noted. Hemp grown in China is 5-6 meters tall, whereas the US and European variety is only about 1 meter. The CBD component extracted from Chinese hemp is processed for pharmaceutical use in the US, Hu said.Eye in the SkyHu dismissed the fanciful notion Chinese hemp might be used to produce illicit marijuana for mainland stoners."The cost would be unreasonably high and those companies with the processing equipment and technology under strict official supervision," Hu said.China bans the cultivation, sale, purchase or use of marijuana with a high THC content, Hu said. The National Narcotic Control Commission have conducted a campaign codenamed Tianmu, or Eye in the Sky, using satellites and drones to locate illegal opium poppies or marijuana plants.