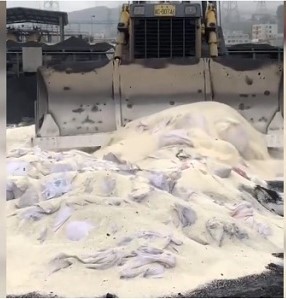 The rice is reportedly from Yiyang of Central China's Hunan Province. Hunan authority has launched an investigation against seven local companies for their alleged link to the incident.

The Global Times reached out to Yiyang-based producer of Shenzhou Rice on Saturday, whose labeling was visible on some packages, after local media broadcast videos of destroying the contaminated rice on Tuesday.

Li Jiyao, the owner of the producer, declined to answer whether their produce belonged to the destroyed rice lot and if they had sold the produce to Zhenxiong.

"I had never shipped my company's rice to Zhenxiong," Li told the Global Times Saturday, adding that his products have no quality problem.

Cadmium in rice can be traced to soil contamination, which is mainly caused by industrial waste gas, untreated industrial wastewater, and unreasonable fertilization, Zhu explained.

"Cadmium is an element that the human body does not need. Even trace amount of the cadmium will affect health," Zhu said. Zhu suggested people try rice from different regions to avoid taking in cadmium.

Zhu also noted that China has a strict standard requirement for cadmium in rice. Cadmium content per kilogram of rice cannot exceed 0.2 mg. The Codex Alimentarius Commission, jointly run by the UN Food and Agriculture Organization and the World Health Organization, set a maximum cadmium level of 0.4 mg per kilogram for rice.

The contaminated rice was busted after the Yunnan market watchdog found that the rice noodles produced by a company were contaminated with heavy metals.

Rice noodle is an essential daily food in Yunnan. "It is not the first time for Hunan producers to sell cadmium contaminated rice," Zhou Xinyu, a Yunnan resident told the Global Times. "Considering the bad reputation of the rice from Hunan, we usually buy rice produced in northeastern China."

Previously in 2017, a manufacturer also from Yiyang sold over 1,440 tons of cadmium contaminated rice, which was meant to be used as animal feed, to the food market, according to media reports.