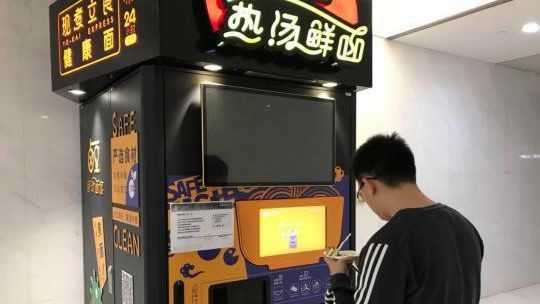 Three vending machines that recently started serving bowls of noodles to pleasantly amused customers in Shanghai came to an abrupt halt on October 27, when the local market authority "suspended" their operations.

The Shanghai Xuhui District Market Supervisory Bureau's action came amid speculation that the noodle vending machines, launched and managed by Shanghai Ludou Food and Beverage Management Co. Ltd., were operating beyond the scope of registered businesses. 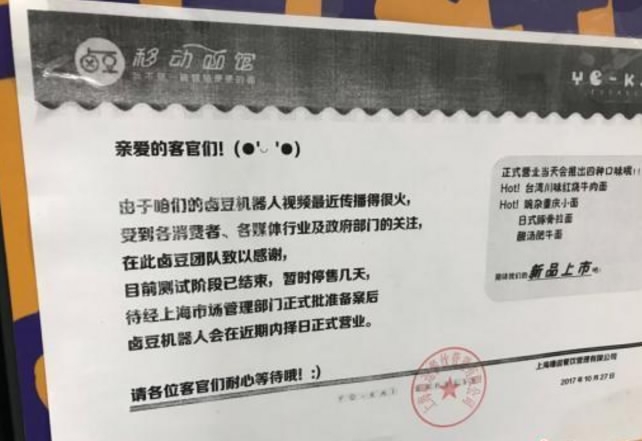 The noodle vending machines “will be suspended for several days as the trial operation came to an end,” reads a printed notice from Shanghai Ludou posted on one of the facilities, adding that the machines “are expected to reopen after they attained official approval from local market watchdog.”

While unmanned supermarkets and canteens have become commonplace having sprung up on the streets of several cities across the country, the noodle machines, believed to be the first of its kind, aroused intense public interest for widening the boundaries of artificial intelligence (AI) in gastronomy.

The machines installed in either bustling streets or local office buildings have enjoyed immense popularity since their launch, for being able to nourish shivering diners with a hot bowl of noodles in less than a minute in the freezing winter, as well as providing busy white-collars another quick option for lunch at doorstep from stifling working schedule. 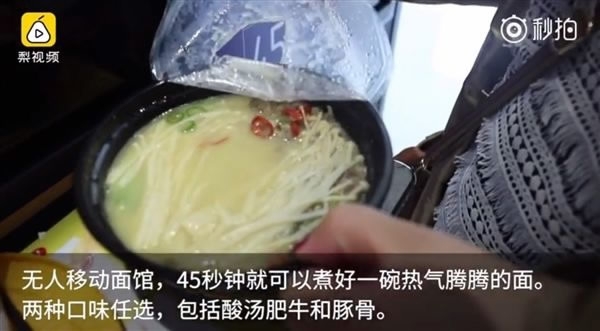 The machine provides flavors including beef and pork. /Screenshot from Miaopai video

After the customers had made an order by simply scanning a QR code and paying online, the vending machine could turn the semi-finished noodles into steaming hot delicacy by thawing the refrigerated soup noodles and then automatically filling the portable box with boiled water – all in 45 seconds. The noodles were offered in different flavors including pork and beef besides having several seasonings to choose from. 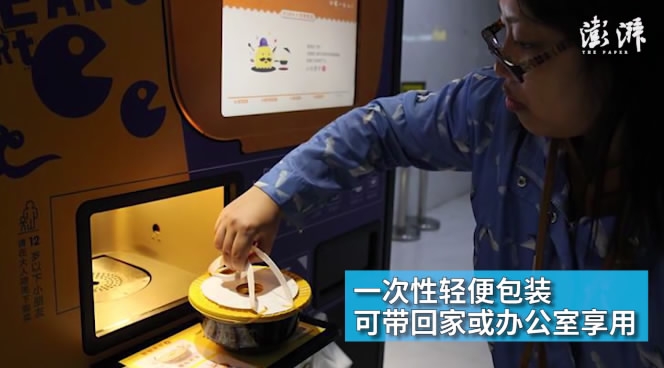 The noodles could be packed in portable boxes. /Screenshot from the Paper video

“Priced at less than 10 yuan (1.5 US dollars) [for each bowl of noodles] and available in a short time, [the machine] provides a good option for us who barely have time for lunch outside amid busy work,” a woman surnamed Cai working at a noodle machine’s nearby office building told Chinanews.

According to another customer, many would even line up at lunch time for the cost-efficient instant food.

Though the enterprise for the noodle machines was granted license for food sales, it has been suspected of running its business beyond permitted scope as it is only registered to sell prepackaged food while in fact it manufactures food as well, Chinanews reported citing authorities from local market supervision bureau.

It is likely that the uniqueness of the machines meant there were ambiguity under which license these facilities must function.

The machines that were forced to be shut down however are expected to reopen after related business certificates are completed, as per Shanghai Municipal Food and Drug Administration.