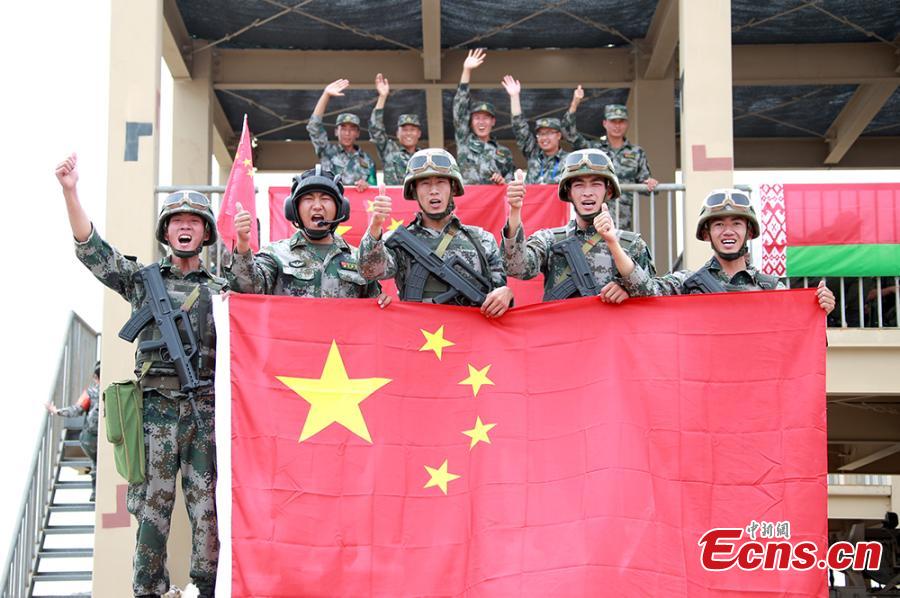 Three squads of Chinese marines won the top three positions among 13 teams from five countries in an obstacle course contest, the first event of the "Seaborne Assault" competition of the International Army Games, held in the southeastern city of Quanzhou Monday.

"Military exchanges like this will enhance and improve our training, management, and education," said Kong Jun, commander of Marine Corps of the People's Liberation Army (PLA) Navy. "We will try new ways to strengthen our exchanges with our foreign counterparts."

The marine division was added to the PLA in the 1950s and then reinstated in the 1980s.

The PLA started with about 20,000 soldiers in the eastern city of Nanchang in an armed uprising on Aug. 1, 1927, and has grown to around two million servicemen and women in the Army, Navy, Air Force, Rocket Force, and other services.

Growing from a revolutionary army that fought against foreign invaders and for the liberation of Chinese people and the nation, the PLA is taking a "crucial leap" in the new era from being simply large to being strong.

"We will make it our mission to see that by 2035, the modernization of our national defense and our forces is basically complete; and that by the mid-21st century our people's armed forces have been fully transformed into world-class forces," said President Xi Jinping, also general secretary of the Communist Party of China (CPC) Central Committee and chairman of Central Military Commission (CMC), in the report to the 19th CPC National Congress.

Under China's national defense policy which is defensive in nature, the PLA faces the complex task of reforming itself to be more loyal, disciplined and combat-capable in peacetime.

In July this year, the PLA started recruiting "civilian personnel" to attract talent that are urgently needed.

The recruitment drive, approved by the CMC, is the first of its kind since deeper reform was introduced to the national defense and armed forces in late 2015.

Under the reform, military organizations were revamped, and the joint combat command mechanism was improved. The four military headquarters -- staff, politics, logistics, and armaments -- were reorganized into 15 agencies, while the seven military area commands were regrouped into five theater commands.

In the meantime, the percentage of land forces' personnel among the entire PLA was cut to less than half for the first time, and the new Rocket Force and the Strategic Support Force were established.

The number of PLA officers was also reduced by 30 percent, and hundreds of generals switched posts.

In April, he reviewed the PLA Navy in the South China Sea, the largest of its kind in the People's Republic of China since its founding in 1949. More than half of the vessels attending the review were commissioned after the 18th CPC National Congress in 2012.

"In just a few years, the PLA has been deeply transformed," said He Xiaoming, daughter of He Long, late PLA Marshal who commanded the Nanchang Uprising.

With enhanced strategic and combat capacity, the PLA not only effectively defends China's national interest but also plays an active role in international peacekeeping and humanitarian operations, contributing to regional stability and world peace.

Strengthening political loyalty has repeatedly been stressed over the past five years, with measures adopted to ensure the Party's leadership and nurture the faith and integrity of officers and soldiers.

After the 19th CPC National Congress in October last year, the CMC released a guideline on the deep and comprehensive implementation of the system by which the chairman of the CMC has overall responsibility for the army.

According to the guideline, China's military should use Xi Jinping Thought on Socialism with Chinese Characteristics for a New Era as their guide, fully implement Xi's thinking on strengthening the military and follow the absolute leadership of the CPC.

"With the system, the Party and the country can never end up in a mess, the army can always stay united, and conspirators will never find an opening," said Zou Yan, a 103-year-old veteran.

Since the 18th CPC National Congress in 2012, more than 100 PLA officers at or above the corps-level, including two former CMC vice chairmen, have been investigated and punished.

A new disciplinary commission and a commission for political and legal affairs were set up under the CMC on the orders of Xi, and more than 40 military statutes and regulations were adopted in a bid to preserve exemplary PLA conduct, strict discipline, and high morale.

Servicemen and women, including high-ranking officers, have not only been under tighter scrutiny over their integrity, but also been closely supervised regarding their competence.

On June 19, watched by over 3,600 officers and soldiers, the commanders of 13 army groups of the PLA were reviewed by the army command and experts from military academies regarding their leadership.

"Each generation of servicemen has their own missions and responsibilities. Now the historical responsibility of building a strong military falls on our shoulders," said Wang Rui, a squad leader of the 74th Army Group of the PLA.