CHINA Mask makers go all out in fight against novel coronavirus

Mask makers go all out in fight against novel coronavirus 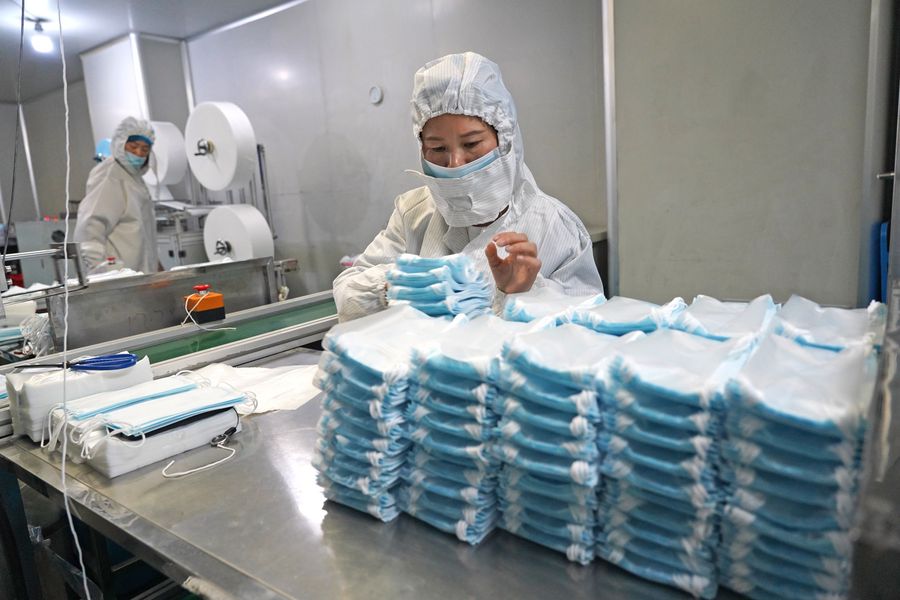 BEIJING, Feb. 6 (Xinhua) -- Medical material manufacturers across China are racing against the clock to make masks, the most sought-after item amid the novel coronavirus outbreak, which has claimed hundreds of lives nationwide.

Gangsong Protective Equipment Technology Co., Ltd., a company under liquidation in east China's Jiangsu Province, was "revived" and is busy producing KN95 respirators and disposable non-woven masks, which are urgently needed on the frontlines of the battle against the epidemic.

"It took no more than four days for us to obtain raw materials, equipment and workers after the government allowed our company to resume production," said Jiang Hongyuan, general manager of the company, which develops and makes protective suits, gloves and medical nonwovens.

Considering the shortage of medical supplies, the People's Court of Wujiang District in the city of Suzhou allowed Jiang's firm, which owns a mask manufacturing certificate, to resume production according to law, said Zhang Youshun, presiding judge of the bankruptcy court.

Jiangsu Shenghong Group, which set up a 30 million yuan (around 4.3 million U.S. dollars) fund to secure medical supplies during the epidemic, immediately provided financial support for Gangsong and helped it purchase raw materials and manufacturing equipment.

Jiang said their first production line is able to produce 20,000 KN95 respirators and 100,000 disposable non-woven masks, respectively, each day. In the future, the company will add another three lines with a total daily output of 240,000 masks.

China has actively coordinated resources under a joint prevention and control mechanism to address the shortage of masks amid the novel coronavirus outbreak, Hao Fuqing, an official with the National Development and Reform Commission, said Wednesday.

As of Monday, daily production of masks exceeded 14.8 million by factories in 22 provincial-level regions, up 3.1 percent from the previous day. The output of masks has shown a continuous upward trend in general, especially medical KN95 masks, according to Hao.

As long as they are meeting standards, enterprises can go full steam ahead in production without worrying about the surplus, which will be purchased and kept in reserve by the government after the epidemic, Hao stressed.

The roaring sound of machinery surrounds workers as they are busy sewing masks and packing products at a workshop of SPRO Medical Products (Xiamen) Co., Ltd. in east China's Fujian Province.

"Due to a staff shortage, our workers toil more than 11 hours a day over two shifts. To produce more masks, they only spend half an hour at noon to have lunch and rest," said Wang Hui, who is in charge of the company's workshop.

"Currently most workers were temporarily recruited by the company after training. Our output will be increased after they become more skilled and efficient," Wen said.

By Wednesday, more than 10 mask and protective suit manufacturers have resumed production in the city of Xiamen. In front of the gates of these medical material producers, power-generating and emergency communication vehicles are on standby.

To secure the medical supplies, in particular masks, four medical mask makers in southwest China's Chongqing Municipality have been working around the clock. Since production resumption on Jan. 23, more than 1.8 million masks have been made in Chongqing.

However, the city is still in a mask supply shortage, said Ma Ranxi, deputy head of the municipal publicity department.

Ma added that the local government deployed around 58 percent of masks to medical institutes, and the remaining were given to personnel on the frontlines of the epidemic control or in counties and districts hit hard by the virus.

Chinese health authorities Thursday said it received reports of 3,694 new confirmed cases of novel coronavirus infection on Wednesday, bringing the total to 28,018 from 31 provincial-level regions. A total of 563 people had died of the disease by the end of Wednesday.