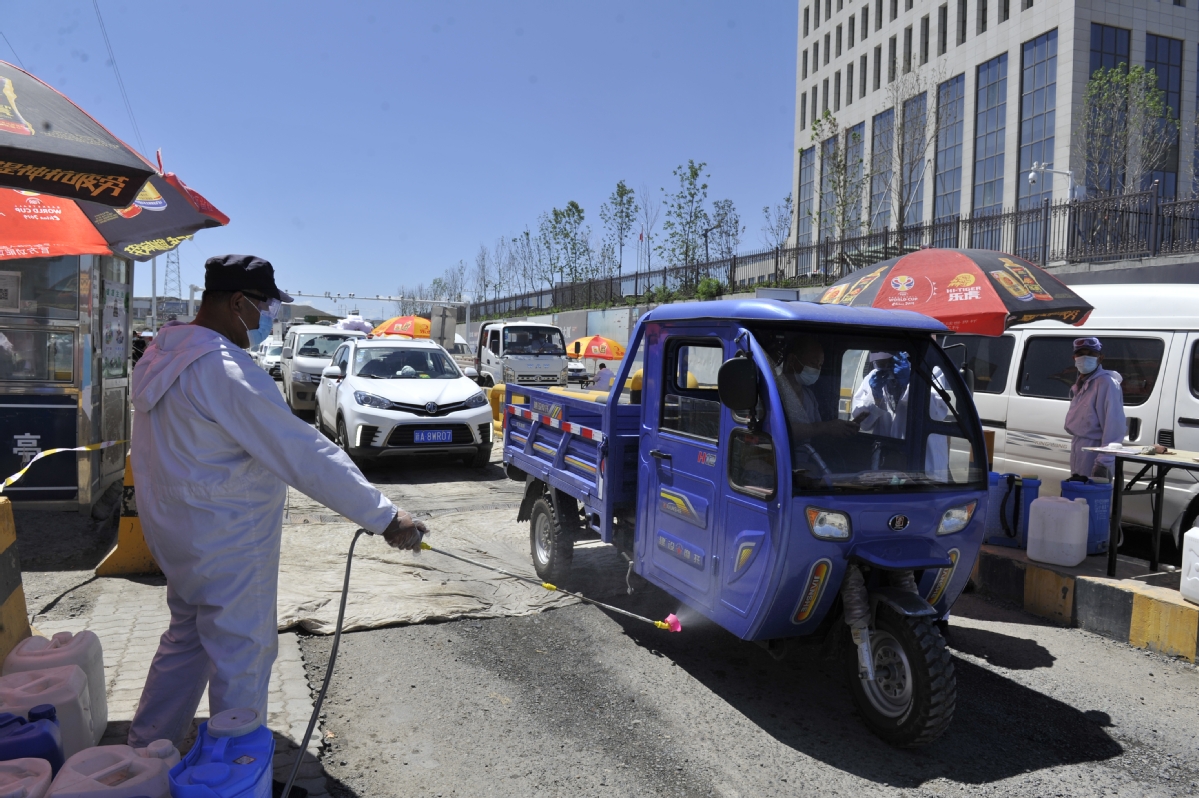 A health worker sanitizes a vehicle at the entrance of a vegetable wholesale market in Urumqi, Xinjiang Uygur autonomous region, on Friday. (Chen Yan/China Daily)

Urumqi, capital of the Xinjiang Uygur autonomous region, has launched mass novel coronavirus screening and restricted the movement of its residents in response to a new outbreak that rose to 30 cases as of Saturday.

The city added 13 new locally transmitted cases on Saturday, down from 16 registered a day before. The first patient tested positive for the virus on Wednesday after no new local infections were reported across Xinjiang for nearly five months, according to local health authorities.

Nationwide, three other confirmed cases came from overseas and a total of 42 asymptomatic cases were reported on Saturday, the National Health Commission said on Sunday.

One of the imported confirmed cases and eight of the asymptomatic carriers are employees of China Petrochemical Corp, or Sinopec, the country's largest refiner and petrochemical producer. They arrived in Qingdao, Shandong province, from Kuwait on a chartered flight on Friday.

A total of 350 other passengers traveling on the same plane were identified and isolated for medical observation, according to Qingdao's health commission.

In Urumqi, the new outbreak is associated with a cluster of group activities and has developed at a relatively fast pace, Rui Baoling, head of the city's disease control and prevention center, said over the weekend.

Most of the 30 confirmed patients as of Saturday had mild or moderate cases, and a total of 41 asymptomatic patients and 2,705 close contacts were in isolation for medical observation, according to Rui.

She said the majority of newly confirmed and asymptomatic cases were detected in Tianshan district and they were all already placed under quarantine, so there was no need to panic.

Zhang Wei, head of Urumqi's health commission, said that the city was carrying out a citywide, free testing campaign beginning in neighborhoods that have reported new cases and among close contacts or residents with a fever, and it would gradually extend across the entire city.

Twenty-five certified testing institutions and over 1,600 medical workers will be conducting the tests.

On Saturday, the National Health Commission organized 10 teams consisting of 200 medical workers from 10 provincial-level regions to boost the testing capacity in Urumqi.

That includes a 21-member medical team from Wuhan, Hubei province, the hardest-hit region in China where the disease has been stamped out. The team also shipped over 100 items of testing equipment and medical supplies to Urumqi.

Zhang added that as of 8 am Sunday, all residents being quarantined had received tests.

Upon discovering the flare-up of the virus, Urumqi has taken swift action to track down close contacts, halt public gatherings, reduce public transportation and curtail flights in and out of the city, according to the local government.

Access to residential communities has been strictly limited and local residents are urged not to leave the city unless for essential reasons and must undergo tests before departure.

The Beijing municipal government announced on Sunday that the emergency response level in the city will be lowered to the third level starting from Monday after reporting no new infections for 13 consecutive days.

The capital activated the second level of response in a four-tier system on June 16 following the detection of a new outbreak linked to a major wholesale food market. A total of 335 confirmed cases were reported during the outbreak.

Chen Bei, deputy secretary-general of the city government, said at a news conference that there is no high-risk area in Beijing and only one at medium risk. "The epidemic situation is stable and controllable, and has met the requirements for downgrading response levels," she said.

Public facilities including parks, tourist sites and sports venues across the city can reopen at 50 percent of daily visitor capacity, Chen said.