The day was named by Hong Kong residents as "Day of Supporting Police." None of these visitors dressed up in black or wore masks, drawing a significant contrast to the violent anti-government protesters who blocked the roads and paralyzed the normal functioning of lives. 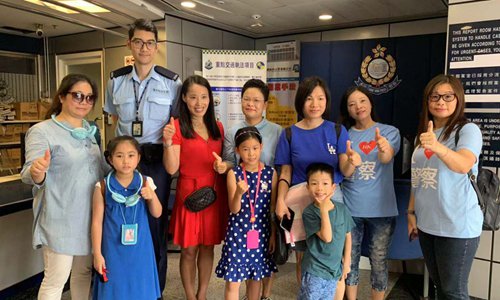 "Without them [the police], I would be so scared to let my kid play outside," a local resident surnamed Chan told the Global Times.

Radical protesters stormed the Tin Shui Wai police station amid recent riots and smashed the entrance door and windows of the building. A police officer at the station said they have been working long hours lately and face tremendous pressure as rioters leaked their personal information online that led to a spree of verbal abuses. 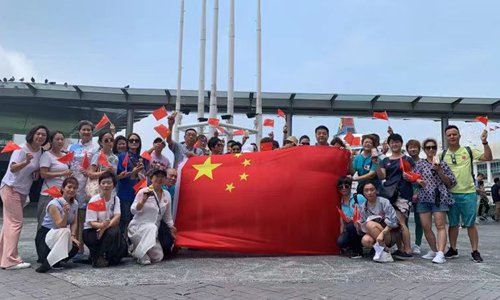 Symbolizing an act to guard Hong Kong and to restore social order, over 50 Hong Kong tourism workers voluntarily went to the Star Ferry Pier in Tsim Sha Tsui on Saturday.

A group of representatives from the tourism sector also showed up at Hong Kong's Victoria Harbor on Saturday morning, who were seen strongly condemning the violent protests which have jeopardized the tourism industry.

"This summer has seen a catastrophe. We forecast that the number of tourists visiting Hong Kong will continue to drop during August," Timothy Chui, head of Travel Industry Council of Hong Kong, told the Global Times. 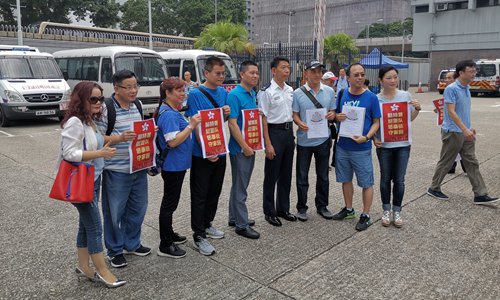 Residents express their support and gratitude toward the Hong Kong police at the Kwai Chung Police station on Saturday.

Tourism and related sectors account for 18 percent of the total GDP of Hong Kong in 2018, and recent violent protests have been seriously weighing on the overall economic growth for 2019, according to industry representatives.

But in spite of the criticism and some Hong Kong media's selective coverage, the Hong Kong police exercised the utmost restraint, local residents said.

Around 11 am, several Hongkongers arrived at the Kwai Chung Police Station to express their warmth and thanks. Dick Wong, commander of the police station, told the Global Times that they could not tell the exact number of people who came as they have been coming incessantly the entire morning.

Many people held placards that read "Support the police. Thank you!" and raised slogans of  "anti-violence and safeguard the rule of law". Some even took pictures with the blast shield the police used to curb the riots.

A citizen surnamed Leung said they came without wearing masks or helmets because they were not afraid.

"Unlike those rioters who wear black shirts, masks, and helmets and who unleashed violence in the name of democracy, we stick to the law and we love Hong Kong."

Another resident surnamed Wong said she took pictures with the shield, which is what scares the rioters.

"I understand police officers have been working very hard, they are sometimes facing unjust accusations," said a local resident surnamed Mao in Tin Shui Wai. She got emotional as he spoke.