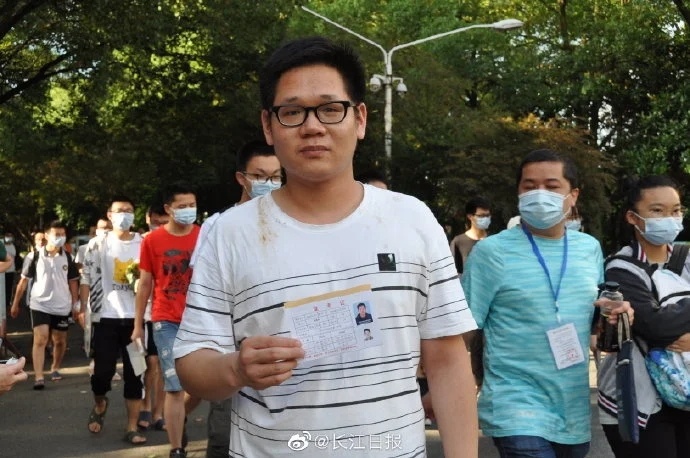 Four years ago, Cheng Chuankun graduated with a master's degree from North University of China in Taiyuan, Shanxi province. But on July 8, he was seen walking out of a classroom at a high school in Wuhan, Central China's Hubei province, where China's annual gaokao for local students was held.

Cheng is the son of Cheng Shengqi, a 9th generation master of the "Cheng-styled bone setting method." The traditional Chinese method has a history of more than 200 years and was listed in 2017 as one of Wuhan's intangible cultural heritage.

In recent years, Cheng Shengqi has been searching for the tenth generation to inherit the "Cheng-styled bone setting method" but failed to find someone suitable.

"My father asked me to apply for medical colleges when I took the gaokao exam the first-time round," Cheng Chuankun told Changjiang Daily, "but at that time, I felt that medicine was too complicated for me, so I chose the major of materials science."

In 2013, he enrolled in North University of China to continue his studies to earn a master's degree in materials processing engineering.

In 2016, Cheng got his degree and went to Shenzhen, Guangdong province, to work. Whenever he went back to his hometown, his father tried to persuade him to inherit his medical method. Some patients even praised his father for healing them.

After the city of Wuhan listed his father's method as one of the city's intangible cultural heritage, he started to find his father's work fascinating.

In May 2018, Cheng found a new job in Wuhan and went back to his hometown. When he was at home, he listened to his father's stories. "I have grown from curiosity to admiration for my father."

In June 2019, after many long discussions, young Cheng was convinced by his dad to inherit the bone setting method. As a result, he resigned from his job and started to learn medicine.

To obtain medical licenses, Cheng Chuankun needed to retake the gaokao exam to apply to medical colleges. He did not hesitate.

Since the COVID-19 outbreak earlier this year, Wuhan has been the epicenter of the crisis, which has grown into a global pandemic. Chinese medical workers' work ethics and self-sacrificial spirit have impressed Cheng and touched his heart.

"Due to the COVID-19 pandemic, I was more certain about my choice," he said. According to him, his exam went well, and he is looking forward to his future medical career.