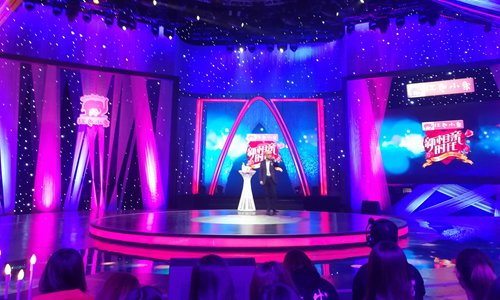 "How many people are in your family?" asked the television host.

"I have two cows and three pigs," the marriage-seeker answered.

This is a clip from TV Matchmaker, the first dating show in the Chinese mainland which was aired on Shanxi Television in 1988, aiming to "serve the public" and help singles find their partners.

From a cold response to a warm welcome, TV Matchmaker was a pioneer in China's dating shows. Over the past 30 years, the country has witnessed a boom in matchmaking events and TV shows.

Under the backdrop of the country's reform and opening-up policy, people who participate in the dating shows no longer bear the pressure of stigmatization. Instead, the platforms provide them with an opportunity to share their inner desires and engage in debates about marriage, love and close relationships.

However, dating shows have also been accused of  conveying wrong values. Meanwhile, the Chinese young generation seems to still be trapped in a chokehold by the ancient tradition of arranged marriages, as can be seen in these shows, particularly in their latest evolution.

With China home to more than 200 million singles of marriageable age, blind dating still remains one of the most popular ways for Chinese singles to meet potential mates.

"The reform and opening-up policy freed young people's minds and we began to reject the tradition of arranged marriage. Those who lived in big cities would post their announcements in newspapers," said Zhang Ji, a 50-year-old resident in Changsha, Hunan Province.

In 1979, the first year after the reform and opening-up policy was launched, the first marriage-seeking notice in modern China was published in the Market News under the People's Daily family of publications.

Though simple and crude, TV Matchmaker was the vanguard of China's dating shows. People who participated in the shows were usually the group in the margins of the marriage market - poor or widowed.

"Before we launched the show (TV Matchmaker), we had searched for three months. However, nobody was willing to come," Li Zhonglian, the show's producer, told the Shanxi Evening News in an interview in 2010.

At that time, people were reluctant to publicize their marriage issues on a television screen. The show later shocked the nation when Li invited a beautiful girl whose appearance attracted a flood of male applicants. However, the female contestant was subject to strong criticism from her family of "losing face."

Dating shows received their first boom in 2000 when Hunan Television launched a brand new program Rose Date, in which the production team invited six pairs of people who would talk during the program.

Unlike TV Matchmaker, Rose Date featured exquisitely-selected beautiful and talented singles, and became a phenomenal hit. Over 20 provincial TV programs followed up with their own versions of the show.

"The accelerated mobility of the population and an increasingly open social atmosphere has contributed to the boom of dating shows. The shows could meet audience demands about romantic love and fantasies," said Liu Yang, a Beijing-based culture commentator.

Crying in a BMW

However, Liu noted that due to the changes of people's attitude toward love and marriage, dating shows have become entertaining and full of hype.

A typical example must be If You Are the One, a legendary show that holds the record of being the highest-rated Chinese dating show.

The show was launched in 2010 on Jiangsu Television and stirred fierce debate and criticism due to the outspoken female guests.

Some of the female contestants shot to fame overnight due to their materialistic comments, such as Ma Nuo, who was famous for her line, "I'd rather cry in a BMW than laugh on the backseat of a bicycle."

The show later was slammed by many official newspapers for promoting money worship and prompted China's media watchdog to issue a notice to tighten its grip on vulgar dating shows.

"Previously, marriage meant forming a family and giving birth to babies. Nowadays, the young generation has completely changed their minds. This can be demonstrated by the high divorce rate. Dating shows are more for fun instead of matchmaking," Liu said.

Meanwhile, blind dating in China is not just limited to singles. Many worried parents are also getting involved.

A new ratings success is New Chinese Dating Time, a TV dating competition that has parents choose potential spouses for their children.

"Being filial to one's parents" is one of the most mentioned criteria for future spouses on New Chinese Dating Time.