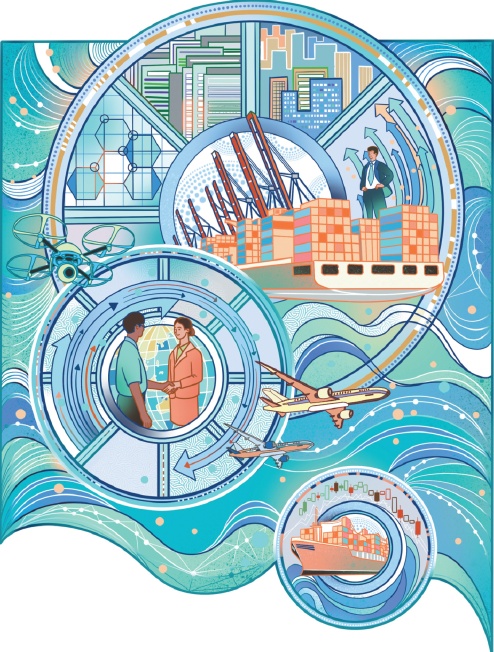 China has rolled out a new set of policy measures to shore up the growth of new business models in foreign trade, a move experts and officials said will facilitate improvements in the sector and foster competitiveness in the nation's imports and exports.

In a guideline issued on July 9, the General Office of the State Council, China's Cabinet, highlighted the importance of accelerating the growth of new business models to advance the high-quality development of foreign trade.

Key measures include encouraging the use of new technologies and tools to empower the growth of such trade, promoting the transformation of traditional sectors and enabling service providers to offer more professional services.

The guideline set out objectives to establish more optimized mechanisms and policy systems for the sector by 2025, when the nation is expected to have upgraded a cluster of international competitive leading businesses and industry clusters.

Policies supporting cross-border e-commerce will be scaled up, with steps to make it easier for the return and exchange of goods and to pilot the sales of imported medicines.

Besides cross-border e-commerce, the measures aim to have an impact on market procurement, comprehensive foreign trade service providers, overseas warehouses and other businesses, according to the ministry.

Last year, China's total export and import volume through cross-border e-commerce platforms reached 1.69 trillion yuan ($260.5 billion), up 31.1 percent year-on-year. In the first five months, the volume increased by 36.9 percent to over 700 billion yuan. The sector expanded 10-fold over the past five years, according to the Ministry of Commerce.

The measures came after China's overall foreign trade volume rose by 27.1 percent year-on-year to 18.07 trillion yuan during the first half of this year, driven by robust demand from the rapid recovery in major economies and the speedy growth of cross-border e-commerce.

Tommy Wu, an economist with British think tank Oxford Economics, wrote in a research report that while China's shipments are still facing near-term headwinds, strong global import demand will continue to underpin its exports through this year.

He noted that port disruptions in Guangdong province in late-May and June will have ripple effects on near-term trade flows, and a retreat of pandemic-related demand coupled with an overall shift in global demand away from goods and toward services will also dampen China's export growth.

"But China's role in global supply chains remains intact, and strong demand for electronics should persist. More generally, we think global demand will continue to support China's export outlook, especially as we expect global supply chain disruptions to be resolved gradually in the coming months," he said.

The latest policy document also mapped out steps to help traditional traders improve their level of digitalization, encouraging them to use cutting-edge technologies such as cloud computing, artificial intelligence and virtual reality to boost their research, development and design and to conduct smart and customized manufacturing.

To enable service providers in the foreign trade sector to offer more professional and tailored services, the guideline pledged to offer more incentives to businesses to conduct maintenance services in bonded zones and beef up support for agents who provide services for export tax rebates.

The development of offshore trading will progress steadily, and foreign trade businesses will be encouraged to develop their own trading websites, the document said.

Li Xingqian, director-general of the foreign trade department in the ministry, said at last week's news briefing that a growing number of Chinese businesses have sought to establish their own e-commerce websites to increase their independence.

The ministry estimates that Chinese businesses have established about 200,000 independent e-commerce websites. Compared with third-party platforms, such websites can cut the cost of operations and maintenance by 30 percent and enable sellers to conduct more targeted sales and promotions, he said.

Demand has also given rise to platforms offering tailored and professional services, such as those specializing in marketing at search engines and those offering purchasing services from overseas, he added.

Yang Baojian, director of operations with a company that manufactures and exports electronic products through cross-border e-commerce, said the latest policy document has offered a significant boost to the sector.

Yang's company saw its sales more than double last year thanks to robust demand from key markets, including the United States, for work-from-home products.

"However, this year, the rise in the costs of logistics and advertising have hampered the profit margin, and the market demand has also softened," he said.

"The new policies are significant in that they support new business models, and we look forward to their full implementation."