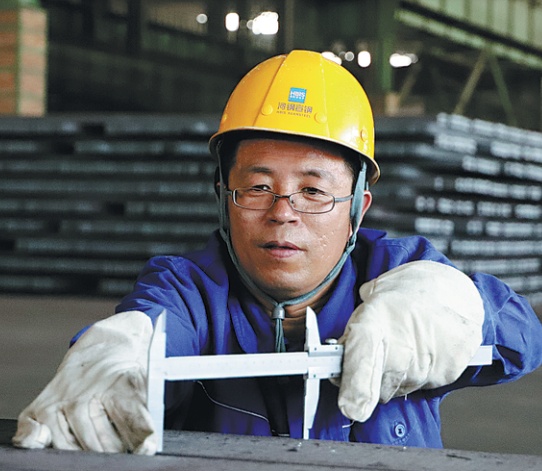 It is said that everyone needs to feel a sense of accomplishment.

In Yang Gaozhan's case, his sense of fulfillment comes from the improvements he has made to each piece of steelmaking equipment he has serviced during his 28-year career.

His daily job is to check on the machines and repair or upgrade them when something goes wrong. Wearing a blue jacket and a yellow safety helmet, Yang's appearance has remained unchanged over the years, but his years of experience and eagerness to create and innovate have transformed the ordinary technical worker.

He was designated a National Technical Expert this month by the country's top human resources body, the Ministry of Human Resources and Social Security.

The title is given to highly skilled grassroots workers, and Yang is the only person to have received the honor in Hebei's steel sector.

"As an ordinary mechanic, such an honor makes me very proud," he said, adding that all these years, he has focused on solving problems.

As a member of the Communist Party of China for the last eight years, he is thankful that the Party has taught him that he can pursue a great cause and a great dream at his grassroots post through self-confidence and innovation.

One of his proudest achievements was improving a hydraulic system used to cast high temperature molten steel into steel slabs.

The system would always get blocked by debris created by the high-temperatures.

In 2000, Yang began to explore ways to resolve the problem, a long-standing issue in the steel industry.

After eight years of research, he found a way.

He came up with a system based on a double directional valve and two pipelines, which is able to filter out impurities by controlling the flow direction of the hydraulic oil in the pipelines.

The improvement might sound obscure, but Yang felt like a high school student who had found the answer to a difficult math problem after much pondering and many trials.

Altogether, he has helped resolve more than 120 different issues related to casting machines and has amassed 72 national patents.

A panel of judges from universities told Yang of their admiration for his work at an innovation and entrepreneurship competition last month.

"Achievements represent the past, and there's no limit to study and innovation," Yang said. He still attends steelmaking workshops every day dressed in the same outfit.

The mobility tracker on his cellphone shows that he takes more than 20,000 steps a day. "Improving the working of the machines is the core of my job," he said.

With the support of HBIS Group, the country's most internationally exposed steel-maker, a studio in his name was set up in 2019.

Hu Zedong, one of the studio members, successfully improved a hydraulic device, the accuracy of which leads the industry.

"He believes that where there is a problem, there is a great opportunity for us to be creative."

Since last month, Yang has been waiting for the machines at the factory to be suspended from service so that he can service them and complete the new modification to the mechanical arm on one of the casting machines that he has been planning for some time.

He will change it from manual to electric control and is eager to try out his idea soon.

"If it's successful, the machine will be changed," Yang said confidently.

"I hope my small innovations help our company develop and more importantly repay my Party and my country, even at the grassroots level."