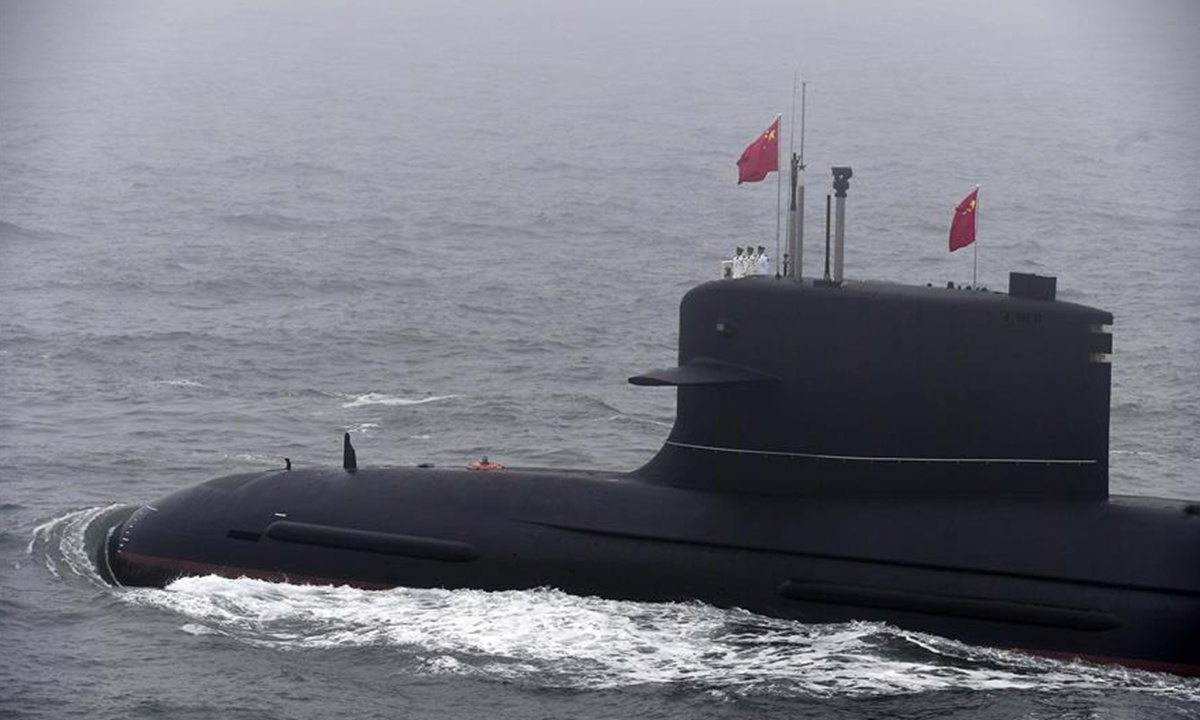 A new type of conventional submarine of the Chinese People's Liberation Army (PLA) Navy takes part in a naval parade staged to mark the 70th founding anniversary of the PLA Navy on the sea off Qingdao, east China's Shandong Province, on April 23, 2019. (Photo: Xinhua)

A report by a UK media organization recently claimed a UK aircraft carrier strike group that sailed in the South China Sea in late July spotted Chinese nuclear-powered submarines that shadowed it during its voyage, but Chinese military experts said on Monday that the report is not credible, and is aimed at showing off the group's presence and boasting of the its anti-submarine capability.

The report, published by the Daily Express on Monday, did not give a source for the information. It claimed that two Type 093 nuclear-powered attack submarines of the Chinese People’s Liberation Army (PLA) Navy were located by anti-submarine sonar operators aboard the HMS Kent and HMS Richmond frigates, which served as escorts for the HMS Queen Elizabeth aircraft carrier in the carrier group, as the group left the South China Sea and moved into the Pacific Ocean.

It further claimed that a UK Astute class submarine identified a third Type 093 submarine as it patrolled ahead of the carrier group.

The reason why the UK operators could identify the type of submarine is that the sounds generated by propellers are unique to every submarine, the Daily Express said.

“This shows that our anti-submarine capabilities, which declined significantly during Iraq and Afghanistan, are back up to speed and doing what they’re supposed to be doing. It’s good news,” the report quoted UK former rear admiral Chris Parry as saying.

However, several Chinese military experts reached by the Global Times on Monday questioned the authenticity of the report, as they believed that by publishing such a report, the UK is showing off its presence.

Many UK warships have not reached full operational capability, and their anti-submarine capability is limited, said Song Zhongping, a military expert and TV commentator.

That is why the report is trying to boast of the UK’s anti-submarine capability, through the means of belittling China’s submarines, Song said.

When conducting an ambush or interception, a submarine does not need to be near a hostile warship to launch a long-range strike, another Chinese military expert told the Global Times, requesting anonymity.

From so far away, it is very difficult to spot the submarine, the expert said.

As a necessary measure of defense, it is possible that the PLA used the HMS Queen Elizabeth aircraft carrier strike group as an imaginary target for practice, a submarine expert who asked not to be identified told the Global Times.

It is also possible that the Chinese submarines intentionally revealed themselves after having accomplished their missions, sending a warning to the UK carrier group, experts said.

The UK aircraft carrier strike group sailed a long way to the Far East to flex its muscles, stir up trouble and disrupt peace and stability in the region, they said.

Now, the UK media is making up this groundless lie to make the UK seem like a victim, experts said, noting that this is an often-used method by Western forces to confuse black and white, using made-up "facts" to attack China and creating “China threat” theories.