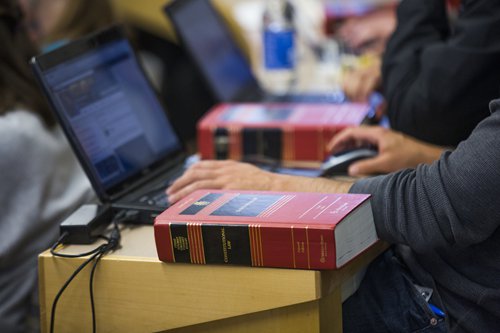 A students uses a computer at the Harvard University library (Photo: VCG) 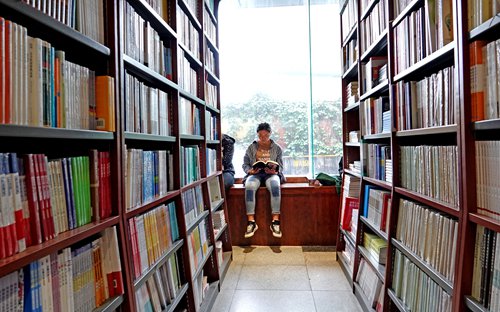 Chinese scholars and experts couldn't help but knit their brows after reading a recent media report from Chinese education company Blue Oak that suggested that Chinese university students were falling behind their US peers when it came to reading. First posted on sohu.com, the report, which came to its controversial conclusion by comparing a purported list of the top borrowed books from libraries at major US and Chinese universities, was widely re-posted by various media agencies in China and became a major talking point on Chinese social media.While works such as Plato's Republic, Samuel Huntington's The Clash of Civilizations and Niccolo Machiavelli's The Prince are repeatedly mentioned as being the "most borrowed" books in the US, the Chinese list is mainly made up of works of fiction such as Lu Yao's The Ordinary World, Jin Yong's Dragon Oath and Liu Cixin's The Three-Body Problem. Critics have pointed out that this shows that Chinese students are paying less attention to serious-minded books in favor of spending more time on leisure reading. While this conclusion was shocking to some, many scholars' frowns deepened even further when they noticed that the US list was actually not based on how often a book was borrowed from a library but rather based on how often it was listed as required reading in a syllabus.  Problematic comparisonAs it turns out, the so-called "most borrowed books at top US universities" that critics in the media and social media were pointing to as proof that Chinese students were falling behind were actually from a 2016 list by an online database known as The Open Syllabus Project. The project collected and analyzed more than 1 million curricula from English-language colleges and universities from the year 2001 to 2015 to come up with a list of the top required readings at major schools, among with top institutions such as Harvard, Princeton and Yale were included. In light of this, those criticizing the Blue Oak report point out that any comparison is unfair since the US list consists of books students were made to read to complete a class, while the Chinese list is of books borrowed from libraries, which in China doesn't necessarily reflect what is taught in the classroom.   "It doesn't make any sense at all since nearly every student at Chinese universities buys their textbooks and required readings so they can read them for as long as they need, instead of temporarily borrowing them from the library," said Li Zukun, a 20-something financial analyst in Beijing who has studied at both Chinese and US universities. Li's opinion was echoed by many Chinese students on social media.  "The two lists from the two countries are measured differently so it is pointless to make any comparison," Ren Dianshun, executive editor-in-chief of China Publisher Magazine, told the Global Times. "The practice of twisting information to catch people's eye is irresponsible," Ren added, noting that the article was trying to play into a prevalent preconception in China that Chinese students are less interested in non-fiction and perform worse in reading compared to their US counterparts - a preconception with which he vehemently disagrees.  Looking at the list of most borrowed books from Chinese universities, Ren said that he felt it was quite natural that novels and other fictional literature, rather than texts related to a particular subject, were at the top since enjoying entertaining fiction works are something all students would have in common regardless of major or personal interests.Room for improvement While the Blue Oak article makes a faulty comparison, its publication has done some good in that it has sparked debate about where Chinese students can improve. "Frankly speaking, I am disappointed in this list of books. The overall level of reading is lower than I expected. Our students should spend more time on classic works rather than reading for fun," Long Dong, a well-known Chinese writer, told the Global Times. Long noticed that young people in China spend far less time reading classic works in-depth due to the popularity of the Internet and smart phones. The Chinese list, in his eyes, reflects immaturity and lack of depth in thought among students in China today."Our time is not infinite, so I do think that students should be more selective in their reading," said Long.He stated that the key problem lies in a lack of reading guidance and the long-term cultivation of reading habits among young Chinese, both at home and at school."Our children's reading habits need better guidance. Both parents and teachers should do their part," said Long. Ren agreed that guidance is necessary, adding that based on his more than decade of experience in the publishing industry a gap does exist between Chinese and US students when it comes to the diversity of reading materials. "Our exam-oriented educational system has a long-term influence on students' reading habits. We cannot deny that overall students in China are still lacking when it comes to the depth and breadth of what they read," he said.