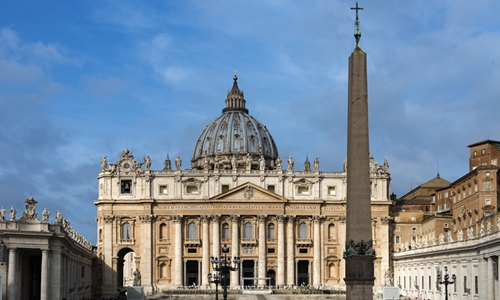 Medical cooperation has been playing a key role in advancing China-Vatican relations, Chinese experts said after a first meeting in half a century between their foreign ministers despite the global novel coronavirus pneumonia crisis.

The meeting between Chinese State Councilor and Foreign Minister Wang Yi and Archbishop Paul Gallagher, secretary for the Holy See's relations with states, took place on the sidelines of the Munich Security Conference on Friday.

At the meeting, Gallagher representing Pope Francis expressed respect and support for China’s ongoing battle against COVID-19 and said he believed China has the wisdom and courage to win the battle.

Cooperation in the medicine and health sector has obviously enhanced bilateral relations between China and the Vatican, Wang Meixiu, a research fellow studying Catholicism at the Chinese Academy of Social Sciences in Beijing, told the Global Times on Saturday.

Last month the pope praised what he called China’s “great commitment” to contain the coronavirus outbreak and later the Vatican’s charity arm sent hundreds of thousands of medical masks and supplies to China as a goodwill gesture.

The two countries have also been fighting organ trafficking and promoting ecological protection.

Wang Yi said at the meeting that it was the first time for the foreign ministers of the two sides to meet and hold talks, a continuation of long-term interactions and expected to open more room for future exchanges.

Wang Yi noted that the China-Vatican deal on appointing bishops was a groundbreaking practice that has brought positive achievements.

Gallagher mentioned the two countries’ deal in 2018 concerning the bishop appointments in China and said it was important and beneficial for promoting the welfare of Catholics and the Chinese people.

In September 2018, China and the Vatican signed a landmark deal on the appointment of bishops, a thorny issue that caused decades of tension between the two sides.

The deal expires in September 2020. Friendly cooperation and exchanges will aid the renewal of the deal, which is positive for both sides, Wang Meixiu noted.

The meeting expressed the kindness of both sides, Yan Kejia, director of the Shanghai Academy of Social Sciences' Institute of Religious Studies, told the Global Times on Saturday.

“The Vatican’s concern will help enhance understanding and trust between China and the Vatican,” Yan said.