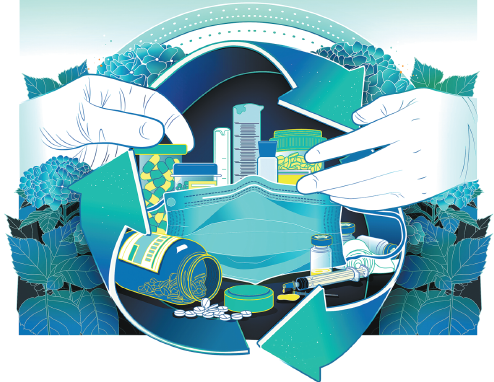 China has unveiled a plan to bolster its medical waste disposal capacity in the next two years, with steps to build more facilities and expand existing ones, after the novel coronavirus outbreak left many cities overloaded with such refuse.

The action plan, jointly published by the National Development and Reform Commission, the National Health Commission and the Ministry of Ecology and Environment on May 3, says major cities should have ample capacity to handle medical waste in times of emergency by 2022.

Every prefecture-level city must set up at least one integrated facility before the end of this year, with every county required to establish a collection, transfer and disposal system for medical waste.

The plan said China's distribution of medical waste disposal capacity is regionally unbalanced, with problems in some places including aging facilities and inappropriate disposal standards.

The novel coronavirus pneumonia pandemic placed a strain on cities' capacity to dispose of medical waste, with Wuhan, the Chinese city hit hardest by the disease, seeing its medical waste increase from 40 metric tons a day to over 200 tons at the peak of the outbreak.

Zhao Qunying, head of the Ministry of Ecology and Environment's emergency response office, told a news briefing in March that 22 cities had been overloaded with medical waste and facilities in another 28 cities were at full capacity.

The country was able to properly dispose of 4,902.8 tons of medical waste a day before the outbreak, but that had been increased to 6,114.8 tons a day, the ministry said in a statement issued on Wednesday.

According to the action plan, local authorities must conduct a comprehensive survey of facilities before the end of this month and then come up with plans to optimize the distribution of facilities.

Large cities must assess their disposal capacities and take the potential growth of medical waste and emergency scenarios into account before planning, designing and building new facilities, it said.

It also highlighted the importance of renovating existing facilities to expand their capacity and ensure they can meet standards.

The action plan is part of a broader effort to boost China's medical waste disposal capacity.

A revision to the Law on the Prevention and Control of Solid Waste Pollution, passed on April 29 by the Standing Committee of the National People's Congress, included specific items on tightening the management of medical waste, especially during major disease outbreaks. The law now stipulates that governments at the county level and above must increase their capacity to dispose of medical waste, and authorities at various levels must allocate special funds for the handling of hazardous waste in the event of a major outbreak.

Ma Jun, director of the Institute of Public and Environmental Affairs, a Beijing-based nonprofit environmental research organization, said disposing of medical waste placed a lot of demands on funding, technologies and urban planning, which was why many cities lacked sufficient capacity.

"The cost of disposal and the amount of investment required to build new facilities for medical waste is much higher than for other solid waste," he said. "Many communities are also unwilling to have such facilities located nearby."

The novel coronavirus outbreak had highlighted the lack of capacity in many large cities, and the gap could be even bigger in some small cities and rural areas, Ma warned.

But it would be costly to maintain a large disposal capacity on a regular basis, he said, and the key for authorities to cope with a major shortage in the event of an outbreak was to have sound contingency plans. In the meantime, it was also important to ensure that private businesses played a role, as the huge medical waste disposal market had high technical and funding thresholds, he said.

"The market for disposing of medical waste is far from being sufficiently competitive and there are some gray areas and natural monopolies," Ma said.

"It's important to ensure the market can play a decisive role in the allocation of resources."