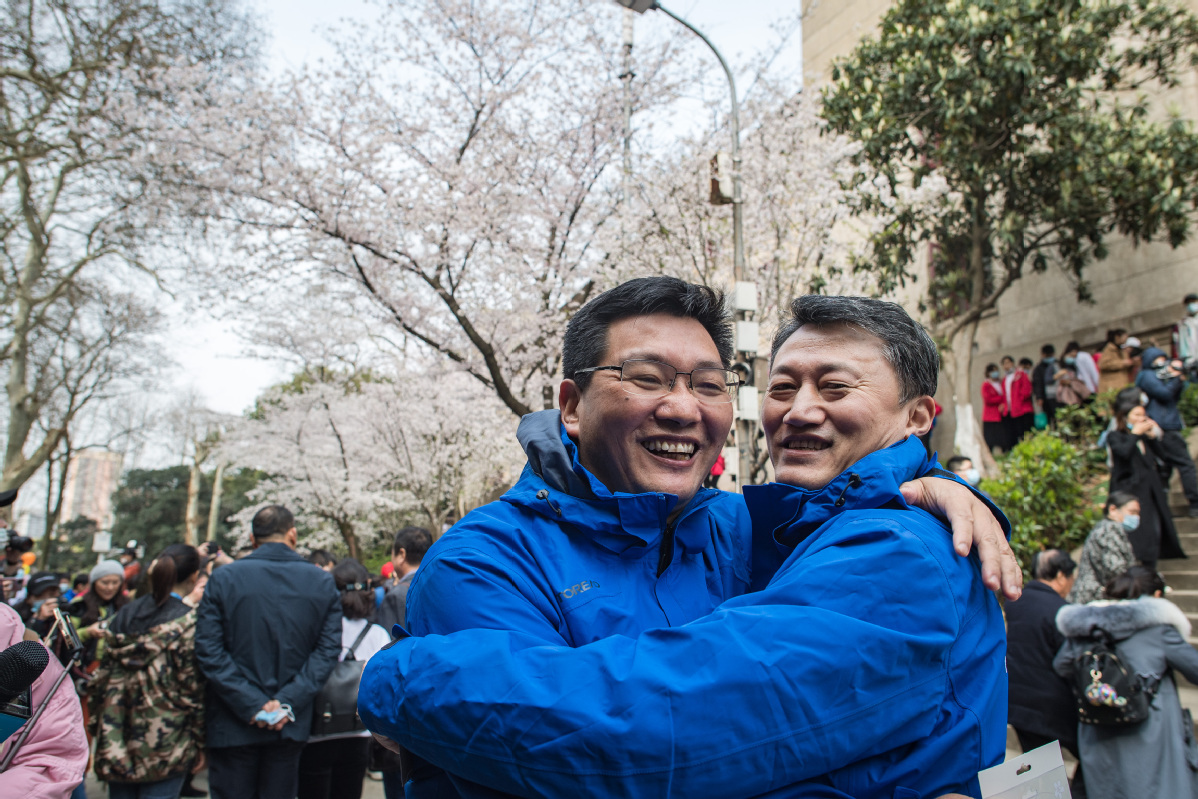 Shang Dong (right), a member of a Liaoning province medical team that helped Wuhan fight COVID-19 last year, hugs Yuan Yufeng, deputy director of Zhongnan Hospital of Wuhan University, on the campus of the university in the Hubei provincial capital on Saturday. They worked together at Leishenshan Hospital, a temporary facility built to treat virus patients in the city after the outbreak last year. XIAO YIJIU/XINHUA

Medical workers who had assisted in the fight against the COVID-19 pandemic in Wuhan, Hubei province, last year were greeted with red carpets, balloons, singing and dance performances and cherry blossoms as they returned to the city to enjoy its beautiful spring scenery over the weekend.

More than 20,000 medical workers and their relatives across the country were invited to visit Wuhan University. The group, which included 4,000 people from outside Hubei province, enjoyed the cherry blossoms at what is often called one of the most beautiful universities in China.

The cherry blossoms on campus were unappreciated last year after the university was closed to outsiders as part of the city's epidemic control. More than 42,000 medical workers were rushed to Wuhan and other cities in Hubei to fight the virus.

The university showed its gratitude by designating Saturday and Sunday as special cherry blossom viewing days for medical workers. Some 1,500 university students and teachers volunteered to welcome them by providing such things as guided tours and taking photos for them.

"We will never forget that at the most critical time for Wuhan and Hubei last year, medical workers across the country rushed to the front line and worked tirelessly to save lives," said Dou Xiankang, president of Wuhan University.

"We made a promise last year to invite you and your families to the university to enjoy the cherry blossoms after normal life resumed in the city, and the promise has been kept," he said at the welcoming ceremony.

Shang Dong, vice-president of the First Affiliated Hospital of Dalian Medical University in Liaoning province, said when he arrived in Wuhan last year, the airport was almost empty. "Although I felt nervous, I was ready to put my own life behind saving others," he said.

"Thanks to the hard work by the medical workers and the great governing capability and system of our country, we are able to come back to Wuhan to reunite with our 'comrades-in-arms' today," Shang added.

Guan Xiaoxuan, a nurse from Shenyang, Liaoning, who worked for almost two months in Wuhan, brought her husband, parents, son and daughter to the city.

"I wrote in my diary last year that I wanted to come back to Wuhan to see the cherry blossoms next spring, and I decided to come as soon as I received the invitation," she said.

"Visiting Wuhan this time was totally different. We were faced with great pressure last year," she said. "Many patients have continued to invite us and remind us to come back. I am overjoyed to see them in person."

Guan Mengting, a medical student at Wuhan University, said she signed up to be a volunteer as soon as she learned about the event.

"They have set a good example for me as a medical student," she said.

Plans call for reprising the events during the cherry blossom season for the next three years.

All A-level scenic spots across Wuhan also offered free entry to medical workers who helped in the anti-epidemic fight.