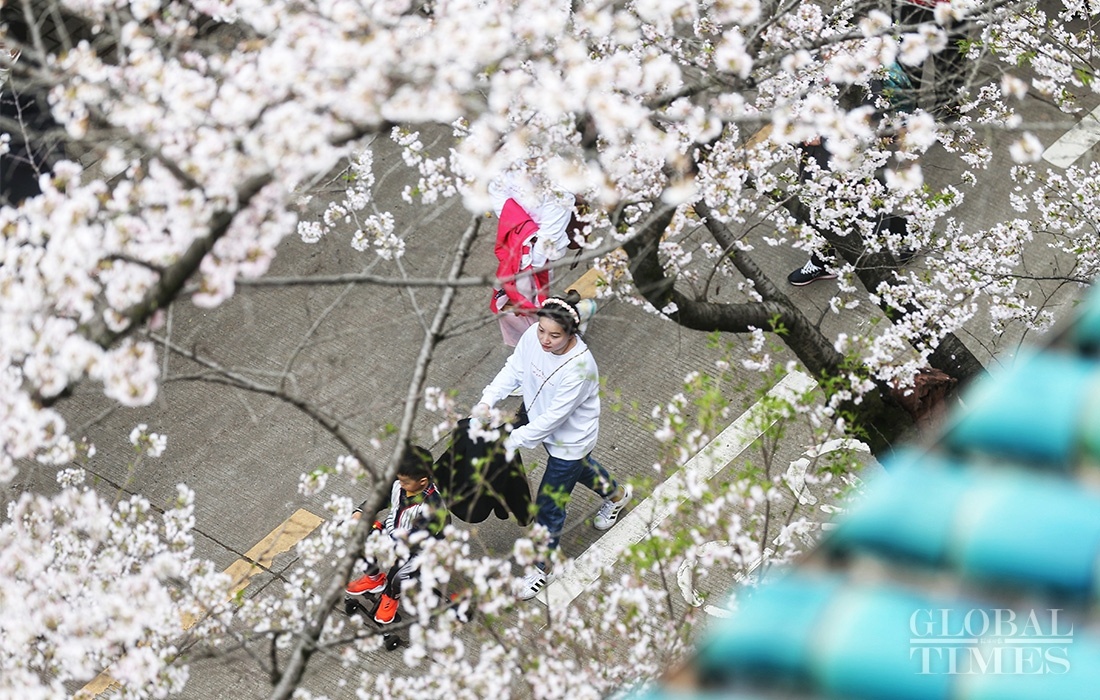 It’s the best season in Wuhan, as the signature cherry blossom trees are in full bloom. Wuhan University, one of the best places in China to enjoy the flowers, set up special cherry blossom open days for the medical workers participating in the COVID-19 prevention and control, inviting medical teams from all over the country to enjoy the cherry blossoms on campus this weekend.

On the first day of the event, more than 3,000 medical personnel from around the country and their families gathered at Wuhan University to appreciate the cherry blossoms.

Wuhan’s cherry blossom season is a highly anticipated event around the country. However, at the beginning of 2020, more than 340 medical teams and 42,000 medical staff from across the country rushed to Wuhan and other cities in Hubei Province to combat the epidemic, missing the beauty of the cherry blossoms in full bloom.

This season, during which Wuhan is back to its usual scene of being filled with cherry blossom admirers everywhere, Wuhan University has set March 13 and 14 as special cherry blossom viewing days for anti-epidemic medical workers, especially for those that supported Hubei Province in the 2020 COVID-19 outbreak.

“I am very happy to see the city returning to its former vitality and vigor, which shows that the hard work we put in last year was well worth it,” Sui Shaoguang, director of the Emergency Department at the Second Hospital of Dalian Medical University from Liaoning Province, told the Global Times.

Sui has vivid memories of last year's battle in Wuhan, where his medical team was one of the first to be stationed at the Leishenshan Hospital, and is proud of the wonders China created there. “Leishenshan Hospital was still a construction site when we arrived, but within a few days, our A10 ward received its first patients and then later we also cured the first patient in this new hospital,” Sui recalled.

At the scene on Saturday, there were also many patients who had been treated and cured by the medical teams at Leishenshan Hospital, waiting early to see their rescuers again.

Seeing the cherry blossom viewing event as a solemn appointment with Wuhan’s “comrades-in-arms” and local residents, Qin Wei, Sui's colleague and head nurse of the No.1 Department of Neurosurgery, returned to Wuhan full of longing and anticipation.

“Last year, when we left Wuhan, our patients’ local medical staff kept inviting and reminding us to come back to Wuhan one year later to enjoy the cherry blossoms. We just did our duty in Wuhan, but the enthusiasm of the people in Wuhan made us very moved and grateful,” she told the Global Times.

The Global Times found many medical staff shedding tears of joy when they met their local Hubei colleagues who were fighting the epidemic together last year, and many of them wrote their best wishes for Wuhan on a signature board on campus.

Wuhan University also held a welcoming ceremony, volunteer explanations, special performances and other activities to thank the medical workers for their past contributions.

A junior student surnamed Liang from Wuhan University's School of Politics and Public Administration, told the Global Times that teachers and students at the school learned about this activity half a month ago and were excited about the event.

“All of us have actively registered as volunteers, receiving training to conduct tours or provide drinking water and souvenirs for the medical staff at the service points on the days of the event. We want to show our gratitude through our hard work and service,” Liang said.