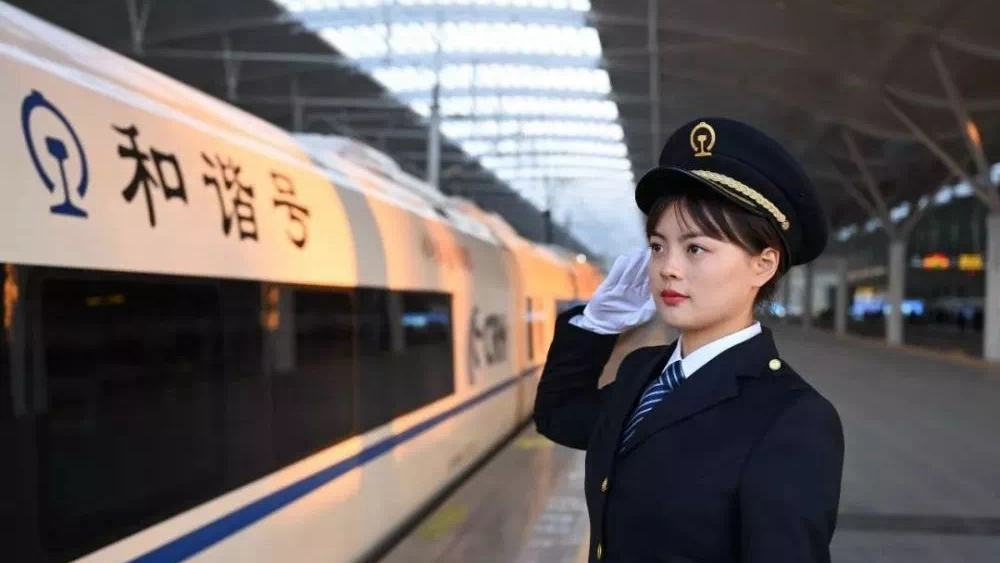 Recruited by a national campaign in May 2019 after receiving months of intensive training, these girls, mostly of the post-90s generation, started their new career first as a co-driver. It will take them two to three years to become a licensed high-speed train driver.

24-year-old co-driver Jin Wanxin is one of them. Because of her long-cherished desire to become a train driver, Jin applied for the post as she heard the recruiting news.

Until then, she had been working in the logistic and maintenance departments of Fuzhou locomotive depot under the railway bureau of Nanchang, capital of southeast China's Jiangxi Province, for more than two years.

As Jin majored in railway locomotive at Jilin Railway Technology College, she seized the life-changing opportunity and was also well prepared.

Apart from grasping locomotive knowledge and technical terms, female drivers have to deal with physically demanding challenges like handling the operations of shifting gears and engaging the clutch just like their male counterparts.

They are also responsible for other labor-consuming tasks related to train operation such as repairs, maintenance and inspection.

"During the shift, the driver must stay fully focused on driving. The responses to various road signs, confirmation of the signal, call and response, and change of speed at the crossings, all require the driver to maintain a high level of concentration," Jin told Xinhua News Agency.

On her run from Nanchang to Xiamen, Jin has to stay in the driver's cab with her instructor and hit the 200,000-kilometers target necessary to become a qualified bullet train driver.

Another soon-to-be driver Hang Ziqing, who is the same age as Jin, doesn't feel gender really comes into the job. "I believe women have some advantages and can do better," said Hang.

In a video released by Nanchang Railway on China's Twitter-like platform Weibo, when asked why they chose to become a high-speed train driver, the candidate replied "why not?"

"My husband and I were classmates at college. We both learned about cars and locomotives. We have been working on the same train for years, he's a driver and I'm an attendant. I just need a chance to be his colleague in the driving cab."

For younger women who are the post-95s generation, love, continuous learning and the interest in a challenging job are their motivations behind choosing this career.

China has the world's largest high-speed railway network, with operating mileage exceeding 35,000 km by the end of 2019. There is no reason why women should not be part of this.