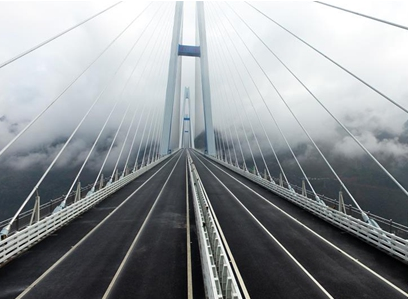 With the highest concrete bridge tower in the world, Pingtang Bridge in southwest China's Guizhou Province on Monday opened to traffic, according to local authorities.

Located in Bouyei-Miao Autonomous Prefecture of Qiannan, the bridge, a colossal cable-supported viaduct that spans 2,135 meters across a canyon, will serve as a major connection on the Pingtang-Luodian Expressway.

With a height of 332 meters, as tall as a 110-floor building, the main tower in the middle of the bridge features the world's tallest reinforced concrete bridge tower.

A total of 1.5 billion yuan (about $215 million) was invested into the construction of the bridge.

The opening of the bridge will reduce the travel time between Pingtang and Luodian from over two and a half hours to about one hour and will facilitate poverty alleviation in the rocky desertification areas of Guizhou and nearby Yunnan Province as well as Guangxi Zhuang Autonomous Region.

Guizhou is known as "the museum of world bridges" due to the vast numbers, various types and complex technologies of the bridges built over the decades.